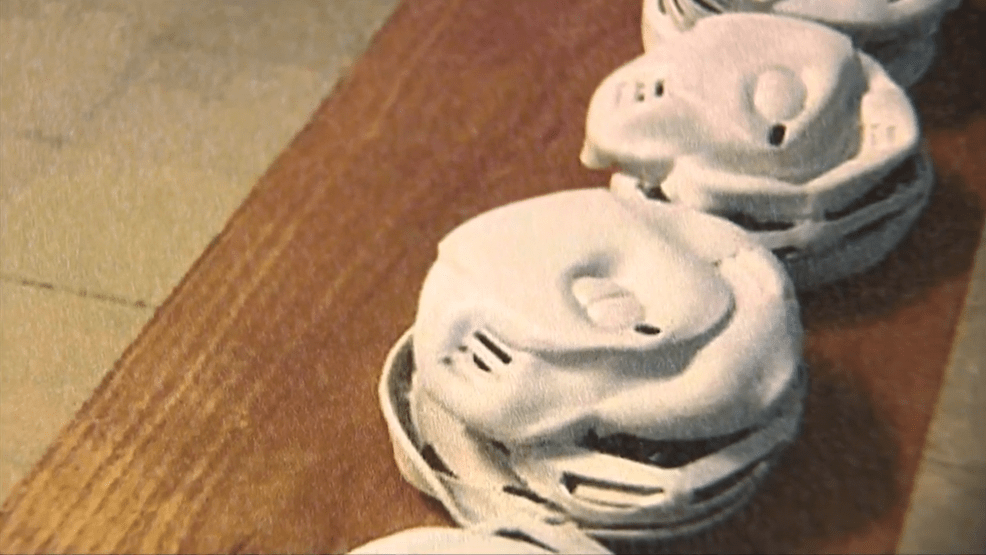 Baltimore City Firefighters find melted smoke alarms intended to be installed in city homes. The problem is concerning enough that the alarms are being sent back to the company that made them.

Operation: Crime and Justice discovered the problem after concerned firefighters reached out to us. We received a photograph of smoke alarms covered with melted plastic.

The maker of the alarms, Kidde, wants all i9010 smoke alarms with the manufacture date of January 16th, 2017, returned.

Kidde has not made a final determination as to the cause of the melting. Fox45 asked Kidde if the alarms’ lithium battery might be to blame. A company spokeswoman said:

“We are not certain what the external heat source could be or when it may have occurred, but we believe the damage to the alarms occurred from extreme external heat.”

Neither Kidde, nor the Baltimore City Fire Department, would tell us exactly how many people could have this smoke alarm in their homes.

Below are statements from Kidde, the Red Cross, and Baltimore City Fire Department. The smoke alarms were initially donated by Kidde to the Red Cross.

Based on initial information, we believe the issue is due to an external heat source that could cause the covers and brackets to melt under extreme conditions. As quality is a top priority for Kidde, we have requested all of the alarms in question and will thoroughly inspect and test them upon receipt to determine the root cause of the issue.

We appreciate the American Red Cross and Baltimore Fire Departments for their vigilance in identifying and reporting this matter quickly, helping Kidde to fulfill its mission of helping to protect people and property from fire and life safety-related hazards.

–Official Statement from the Red Cross:

The Greater Chesapeake Region of the American Red Cross, in partnership with our local fire department, has identified a limited number of “Kidde i9010 Smoke Alarms” that appear cosmetically distorted. Some of these alarms may have been installed as part of our joint effort to reduce home fire deaths and injuries. However, the manufacturer’s initial testing of the alarms has shown that they are still functioning properly.

We are working closely with the manufacturer to return these alarms and to evaluate next steps, as they undertake further inspection and testing.

We encourage anyone who has recently had a smoke alarm installed by the Red Cross that appears to have a cosmetic distortion, including warping, to contact us at (410) 624-2000.

In mid-December, another fire department station reported that they had multiple damaged smoke alarms in their possession. These alarms were part of a batch of alarms we received as part of our smoke alarm installation program. Upon receiving this notification, fire department personnel contacted the manufacturer and advised them about the damaged smoke alarms. The manufacturer advised us that we should remove all smoke alarms dated Jan. 16, 2017 and not to install any i9010s from that batch until they were able to determine what happened.

Notification was sent to all fire department personnel to advise them that we would be initially collecting all smoke alarms with the manufacturer’s date of Jan. 16, 2017 – which was displayed on the boxes that contained alarms that showed visual signs of damage. Once the manufacturer received the smoke alarms, and inspected them, they advised that, “they showed signs of deformed plastics, but they were able to activate an alarm and it tested normally.” Additionally, they stated that “at this time, it is believed that any alarms we were able to attach to the mounting bracket, activate the battery, and receive the 3T audible signal from a Push-to-Test, would be operating correctly and did not need to be replaced.”

When we install all smoke alarms, we visually inspect and test them. Since being made aware of the “deformed plastic” issue with some of the smoke alarms, we took proactive steps in ensuring that they were removed from our stock and returned so they would not be distributed to the fire stations for home installation. Moving forward, we will continue to monitor to see if there are additional updates from the manufacturer on these smoke alarms.