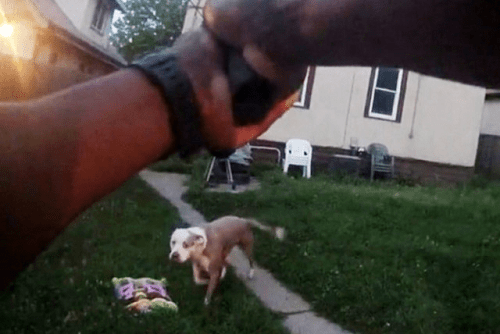 A family is suing the city of Minneapolis and the police department after an officer shot their two dogs in 2017.

The lawsuit filed Friday alleges the dogs, who were service animals at the time of the shooting, suffered permanent injuries and the city attempted to cover up the incident by filing a false a police report.

An officer’s body camera captured the encounter two years ago. Police went to Jennifer LeMay’s house when someone accidentally set off the burglar alarm. Officer Michael Mays shot both dogs, which are American Staffordshire Terriers, saying they charged him.

As seen in body camera footage, one of the dogs, Ciroc, ran out first, stopped and walked slowly toward the officer while wagging his tail when the gun goes off. The second dog, Rocko, runs out and is also hit. Rocko goes out of frame, while Circoc is seen struggling to get away. The officer shot Ciroc in the face and Rocko multiple times.

Both dogs survived, but the lawsuit states they are now family pets and unable to perform their service animal duties. According to the lawsuit, Rocko was an emotional service and seizure alert animal, and Ciroc was a service animal for psychiatric and sensory disabilities and impairments.

The lawsuit also alleges the city tried to cover up the shooting by issuing a police report that said “two large pitbulls charged at officer.” The family says home security video rebuts that claim.

According to the lawsuit, LeMay also notified Xfinity that the alarm was false and police services should be canceled. The lawsuit alleges Xfinity failed to do so.

The family is seeking damages related to emotional distress, physical injuries, damage to personal property, the dogs’ replacement value as service animals and their medical bills.