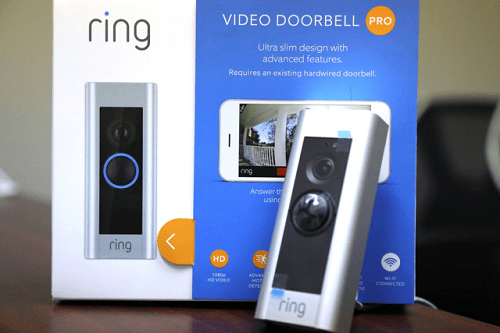 Tom Ribera wants to get the word out that his northeast Kansas City neighborhood is being watched.

He’s buffeted his own home with security cameras. The neighborhood association has worked to install public cameras near a high-crime intersection. And soon, he hopes cameras will line the front doors of his neighbors to help police investigate crime and encourage would-be criminals to move along.

“That’s the message we want to send out: you come over here, you’re going to get caught,” said Ribera, president of the Independence Plaza Neighborhood Council.

Staffers for U.S. Rep. Emanuel Cleaver recently told members of his neighborhood group they would soon receive a donation of Ring video doorbells targeted for Kansas City neighborhoods with high rates of property crime. Cleaver’s office is working to connect those receiving the wifi-enabled doorbells with internet service providers, they said.

That doesn’t appear to be a done deal, though, and the announcement might have been premature. The congressman’s office, contacted later, said officials were still working on the details of that proposal.

Meanwhile, the Kansas City Police Department is preparing to distribute its own batch of doorbells donated by Ring, which is owned by tech behemoth Amazon. It’s just Ring’s latest effort to team up with local law enforcement agencies across the country.

On their own, the doorbells allow residents to keep watch over their homes from a smartphone app. But collectively, they can foster a sort of virtual neighborhood watch in which neighbors share videos and photos with each other and police — an enmeshment of policing and technology that continues to raise concerns about personal privacy and police overreach.

“If somebody in my family gets shot at, I’m going to want the person captured by any means necessary,” she said. “But I’m also thinking about our privacy and whether we actually have any anymore. Do we, if I don’t have any say in whether my neighbors choose to do this and whether the government I’m paying receives that information?”

But local police agencies say the video doorbells have already helped solve crimes across the metro. And in the Independence Plaza neighborhood, Ribera says the value of the cameras outweigh other concerns.

He said crime is the number one issue among his neighbors. These surveillance efforts, which allow residents to see crime happening in real-time, can help reclaim the neighborhood, he said.

“If you can get something to help neutralize the crime, you’ve got to weigh in,” he said. “And in my opinion, it outweighs that sense of privacy out in the streets, which I think is an illusion…When you go outside anywhere you’re on somebody’s camera no matter where you go.”

Last October, the Kansas City Police Department became the first in Missouri to join Ring’s Neighbors app, which fosters information sharing between cops and residents. Even with the app, police don’t have unfettered access to the cameras. They only see videos or information about what’s happening that users voluntarily submit on the Neighbors app. And residents can purchase and use the video doorbells without joining that community.

Crime analysts from each patrol division comb through the portal most days searching for posts that may aid open investigations. The Neighbors app also alerts police to crimes that may have gone unreported. For instance, residents may wake up to discover a rash of car break-ins that occurred overnight. Those crimes will prompt comments on the app even if the vandalism wasn’t officially reported.

“This gives us the ground truth about what may have gone on, as well as a more accurate picture of what the criminal element might have been up to, rather than what we may have gotten by looking at police reports alone,” Becchina said.

Ring officials deferred all questions about the local effort to the Kansas City Police Department. The company began phasing out its device donation program earlier in the year for new law enforcement partners, though KCPD had already signed on as a partner.

So far, no free cameras have been distributed. The police department’s community interaction officers, which work across six patrol divisions, will identify the neighborhoods receiving the donated doorbells, Becchina said. While police hope recipients will participate in the Neighbors app, Becchina insists that choice is voluntary. And any video sharing with police comes only with consent of residents, he said.

Becchina said Ring will provide the cameras at no cost to the city or the police department.

In general, detectives view videos and photos as their most powerful investigative tool, he said.

“The camera, as they say, doesn’t lie,” Becchina said.

Amazon purchased Ring last year in a deal that was reportedly worth more than $1 billion. The ecommerce platform saw it as a way to grow its home security business and provide a way for customers to protect their Amazon deliveries in front of their homes.

But the home security system has faced continued criticism for its ongoing entwinement with law enforcement agencies.

Last month, tech publication Gizmodo reported more than 225 police agencies have partnered with Ring. Sometimes the devices are donated, in other cases, cities subsidize their purchase.

But no matter the mechanism, these partnerships operate with little oversight or transparency, said Evan Greer, deputy director of Fight for the Future, a digital rights advocacy group.

If the Kansas City Police Department wanted to install surveillance cameras on residents’ front doors across the city, Greer said such a move would likely require public meetings, city council oversight and public debates about privacy and civil liberties.

But Amazon has found the “perfect loophole,” she said, by working with local law enforcement.

“Through these partnerships with local police, Amazon is circumventing our democratic process and building a for-profit surveillance dragnet,” Greer said. “It won’t make us safer, but it will undermine our basic rights and freedoms.”

In a statement, a Ring spokesperson said the company does not support programs that require recipients to subscribe to a recording plan or share footage as a condition of a donation.

“Privacy and security and control are extremely important to us, and every decision we make as a company centers around these three pillars,” the statement said.

The company’s website notes that the Neighbors app limits the information available to law enforcement: Police can identify neighborhoods but cannot access individual cameras, exact addresses or user information. And Ring acts as an intermediary when police request videos.

Still, the growing use of the devices by police raises questions about citizens’ Fourth Amendment protections against unreasonable searches and seizures, said Lauren Bonds, legal director for the American Civil Liberties Union of Kansas.

The ACLU isn’t bothered by residents and neighborhoods electing to use the cameras for security. But she said involvement of the police is another matter.

Earlier this year, a Motherboard analysis found that the majority of people reported as “suspicious” on the Neighbors app were people of color.

“I think it’s going to continue to reinforce a very problematic concept we have that certain people belong places and certain people don’t,” Bonds said of the cameras’ proliferation in Kansas City. “That’s going to have incredible racial impacts and it’s deeply concerning.”

That should be of particular concern for rapidly gentrifying neighborhoods east of Troost Avenue, says McDonald, whose group advocates for racial justice. Aside from possibly pitting neighbors against each other, she questions whether cameras will actually reduce crime.

“I don’t think you can just create environmental conditions that make a crime vacuum,” she said. “You cut down a hedgerow and somebody’s not going to hide behind that hedgerow, but it’s not like they’re not going to go snatch a purse somewhere else.”

McDonald is also bothered by the Big Brother element here.

“I walk outside with my bathrobe on sometimes,” she said. “Maybe I don’t want the police viewing that.”

But cameras are already watching over several Kansas City neighborhoods.

The local Cameras for Good program provides neighborhoods with cameras that can go on light poles or local businesses. That has helped connect neighborhoods plagued by violence with police, said Damon Daniel, president of the AdHoc Group Against Crime.

So far, seven neighborhoods have public cameras or are set to receive them, Daniel said. The cameras store video footage in the cloud. If an incident occurs, police can request footage from the local neighborhood association.

He believes the donation of Ring cameras can similarly help combat crime.

“I don’t know why people would not want that. It provides extra security for your home,” he said. “And just like the Cameras for Good program, it’s building a safer connection with your community and a stronger relationship with the police department.”

That’s so far been the case for the Overland Park Police Department, said Officer John Lacy.

Like in Kansas City, Overland Park police investigators monitor activity in the Neighbors app. He wasn’t aware of the doorbells aiding in any major crimes investigations, but said they have helped catch package thieves. And because they capture activity at the front door, they can provide valuable evidence to help enforce orders of protection or restraining orders.

And the doorbells are visible: “When someone is approaching that door and they see a Ring, they know they’re already on camera and they know they can be easily put out there on social media,” Lacy said.

But he acknowledged the devices are not perfect.

In one neighborhood, several people captured and posted footage of a man they considered suspicious jogging late one evening. The man later commented on the app, sharing that he had taken a jog to relieve stress after a long day at work. Those posts were eventually removed, Lacy said.

“We don’t want those types of things,” he said. “We want crime.”