How Dogs Could One Day Trigger PERS Devices & Other Alarms 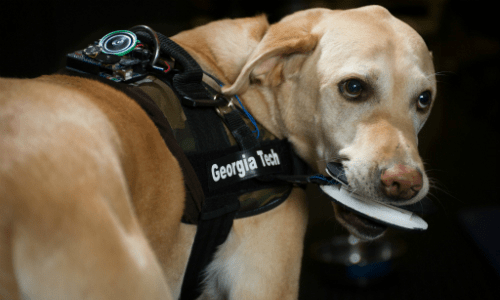 A novel research program at the Georgia Institute of Technology is training dogs to communicate using wearable devices that can activate emergency alerts.

Melody Jackson, founder and director of the FIDO project at the Georgia Institute of Technology, can well envision a time when man’s best friend could play a life-saving role as part of an emergency alert device system.

“We can now imagine a system where the dog is a sensor,” Jackson declares.

Jackson, who has a doctorate in computer science, leads a team of fellow scientists at Georgia Tech with the main goal of facilitating interactions for dogs with occupations — a project abbreviated as FIDO in a nod to its pawed participants that might soon be able to communicate more clearly with humans thanks to the technology being developed by Jackson’s lab.

The team’s research includes the testing of wearable devices for dogs, a dog-friendly in-home touchscreen panel and a way to interpret what’s being communicated by a dog’s different barks. The findings from these studies could open a world of possibilities for the way dogs and humans interact, including in security.

“You have to teach them, but it doesn’t take long. I’ve got two dogs in my lab that can drive a robot in a maze,” says Jackson. “Dogs are way more intelligent than a lot of people think, because they’ve just never tried to train them. But with proper training methods, it works.”

To test whether dogs could activate wearables, the dogs in one FIDO project study were trained to use simple interfaces attached to their vest that required a bite, tug or poke with their nose. These interfaces activated simple Arduino circuit boards equipped with an SD card to record the animals’ interactions with the device. In one study, 11 different breeds — each with different backgrounds and levels of training — participated in testing the different interfaces.

The rigorous tests showed researchers surprising results: a wide variety of dog breeds can be trained quickly to use interfaces they’ve never seen before.

“The longest it took to train any of the dogs to any of the sensors was 27 minutes. The shortest was 27 seconds, so that’s pretty compelling,” says Jackson. “These are natural dog behaviors. Dogs naturally touch things with their noses, tug on things, bite things and hold things in their mouths; these are things that dogs do from birth. So we just channel it, that’s all.”

This essentially means that dogs — which are known for their acute senses of hearing and smell – could be equipped to communicate the things they can sense to humans through connected devices. The first application that many imagine would be for a personal emergency response system (PERS), due to the prevalence of trained service dogs, which can be trained to detect things such as oncoming seizures or diabetic low blood sugar better than humans or machines.

A New Spin on PERS

COPS Monitoring President and COO Jim McMullen says he believes in the importance of PERS devices in general, and thinks that “using trained service animals to activate special PERS devices may be the answer to saving many more lives.”

“If done right, there might be a strong argument to use service animals as a both primary and backup means of detection and alarm activation. There’s no doubt that PERS devices save lives. However, many of them work only if someone can activate the alarm themselves,” says McMullen. “Fall detectors were an added improvement to PERS, but they only work if someone falls. Service animals can be trained to detect a wide variety of conditions such as diabetic low blood sugar, seizures, heart attacks and other conditions that may incapacitate a person without showing obvious signs.”

The public might not have to wait long to see these applications in action, because a dog interface usable for PERS applications has already been prototyped by the FIDO project: an electronic touchscreen specially designed for dogs.

The idea for the new technology came about after an incident in which Jackson’s family member would have benefited from quicker emergency response but did not properly use her PERS device.

Jackson shares that her grandmother tried wearing a necklace-style PERS pendant in the event of a falling accident, but because it wasn’t comfortable she stopped putting it on. Instead, she would leave the device on her bed stand to keep it nearby at night.

“One day she fell in the kitchen and she couldn’t get to her lifeline necklace, so she lay on the floor for four hours until her next-door neighbor came home from work,” Jackson explains.

After this incident, Jackson was inspired see if dogs could be a solution for people who need in-home monitoring but are hesitant to adopt existing technologies for whatever reason — be it a resistance to being monitored, lack of understanding, pride or discomfort. She thought maybe a service animal or pet could be a more comfortable way for at-risk people to get the help they need. 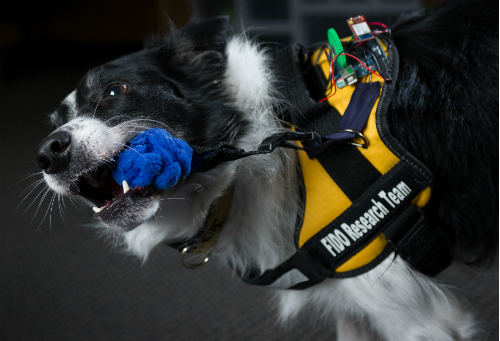 Jackson’s solution was to create and test a touchscreen that mounts at a dog’s height and can be activated by the dog touching a series of icons on its screen. The icons were large enough to be easily seen by the animal, and had a color scheme specifically made for visibility to dogs.

“Any pet dog could be trained to do this touchscreen, it doesn’t necessarily have to be a service dog. Any reasonably intelligent pet dog could do this,” says Jackson.

During in-home testing, two dogs were trained to respond to verbal commands, although Jackson says that they can be trained to see falling as a cue. The scientist set up the touchscreen in one room of the house and trained the dogs to go to that room from anywhere in the house when cued to activate the touchscreen. To simulate real emergencies, which would occur unexpectedly in reality, she set up randomized alerts to her smartphone that told her when it was time to cue the dogs.

Jackson reported 100% accuracy in the dogs’ activation of the touchscreen over a six-week period in this trial.

“If he had a vest on, he wouldn’t have to go into another room, he would just activate the thing on his vest and call 911 that way. So there’s lots of different options there, to accommodate the comfort of the dog and the person,” says Jackson.

To her, these findings are a promising sign that one day more dogs might be equipped to text a friend for help or call 911 in the case of in-home emergencies.

“In my experience, my dogs are way more reliable than a human being. That is my experience, and I would completely trust a dog with my life once they’ve been trained thoroughly to do one of these things,” says Jackson. “After having raised and trained service dogs for over 20 years, I really believe that this is safe and reliable. So far it has been.”

Beyond standalone applications, Jackson also imagines that dogs could activate devices integrated with security systems or smart homes. One idea Jackson sees potential for is a system that recognizes a dog’s different barks and responds accordingly. Her team has applied machine learning to recognize patterns in dog vocalizations and can distinguish between the different barks of their dogs and their probable meanings.

“My dogs have different barks for who’s out in the driveway. My dogs recognize my daughter or my husband, or my friends, and they’re going to bark just to say ‘hey, somebody’s out there,’ but it’s a different bark than the postman or UPS man or somebody they don’t know. And we can tell the nuances in those barks,” says Jackson. “We can imagine a system where the dog is a sensor.”

Jackson imagines a system that responds to the dog’s barks by activating camera feeds and sending an alert to the user’s smartphone, summarizing what the dog’s bark might indicate and inviting the user to examine the video feed for themselves.

“It might trigger something that would send an alert to your smartphone and bring up your cameras. So, your dog says there’s somebody in your yard, it’s somebody friendly, here’s a picture of them,” says Jackson.

McMullen, whose national monitoring company is a member of the Electronic Security Association (ESA), also believes this idea could have some traction, specifically for its potential in reducing false alarms.

“Door contacts, motion detectors and glass break sensors all use different technology to detect an intruder, but none of them are intelligent, and outdoor alarms have a significantly higher false alarm rate,” says McMullen. “If service animals can be trained to intelligently recognize an intruder and to alert the owner or to activate the alarm directly, I think there’s an opportunity in some circumstances for a greater level of protection and lower false alarm rates.”

Nobody has commercialized any products building on this research so far. However, Jackson’s team has been working with the military, police and one private company — all of whom are interested in developing technology and products based on the findings of the FIDO project.

For security professionals, these findings provoke thoughts and questions about the future of the home, new avenues of innovation, and what people might be willing to trust.

McMullen believes that if well-trained dogs were activating the alarms, it might not change much in the way the calls are handled.

“From a monitoring perspective, we would imagine that response to service animal-activated devices would be very similar to other monitored devices. Our job is to be the lifeline when customers need us most, regardless of how the signal was activated. If service animals can improve the ability to provide enhanced, intelligent protection, we’d be interested in exploring how we could integrate the monitoring into our proprietary systems,” says McMullen.

Many variables remain. The technology is still being developed and a few big questions stand out for the security industry: Are the applications in the electronic security and life-safety industry imagined by Jackson and her team viable business opportunities? Will these technologies and others like them see widespread adoption? Will people trust dogs with security tasks, or to monitor their loved ones who need assistance?

Time will tell whether these technologies are adopted by the industry, but in the meantime these canines will carry on learning new tricks and protecting their place as man’s best friend.