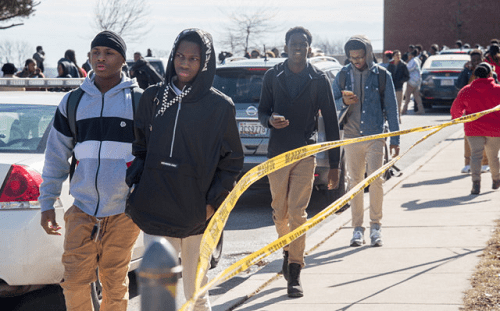 Students at Frederick Douglass High School were dismissed early after a 56-year-old staffer was shot inside the building on February 7, 2019.
(ULYSSES MUNOZ/BALTIMORE SUN/TNS)

When gunfire rang out at Frederick Douglass High in February, the sprawling West Baltimore school was ordered to go on lockdown.

But inside that aging building, many classroom doors had broken locks.

The shooting at Douglass — in which a hall monitor was injured by a student’s irate relative — highlighted a system-wide problem, a recently completed assessment of school building security shows.

The report found that across 165 Baltimore schools, “many of the interior doors to the classrooms do not have the ability/capability of being locked from the inside by a teacher during an emergency lock down,” among other issues.

The Maryland General Assembly passed a law requiring every district in the state to conduct a building security system evaluation of each school in its jurisdiction before the start of this upcoming academic year.

Baltimore’s assessment, completed by independent firms JRS Architects and EMG Corp. in June, found “significant security and safety issues” in schools — beyond the ill-functioning locks on interior doors. The city school system provided a summary of findings to The Baltimore Sun, but denied requests for individual schools’ safety evaluations, which are not subject to Maryland’s public records law.

While Douglass teachers said at the time they were grateful for the upgrades, they added that they were angry that conditions had been allowed to deteriorate — and they were worried about security measures at other schools that weren’t in the spotlight.

“It is not unreasonable for our community, for our children, to want to feel they can lock a door if a threat presents itself,” said Shantay Guy, chair of the district’s Parent and Community Advisory Board.

She said parents will be pushing this year for more proactive measures to keep children safe. They hope mediation can be used to prevent incidents from ever escalating to violence.

The district’s chief of staff Alison Perkins-Cohen said the school system is taking the evaluation seriously, and working out how to prioritize improvements with a limited pot of money based on what will have the biggest impact on the largest number of schools.

The city received about $1 million in 2019 from the School Safety Grant Program, which was created by the General Assembly in response to recent school shootings.

For the upcoming year, she said, the district is putting cameras in the entryways of all schools, installing metal detectors in every high school and doubling down on strict procedures for how visitors can get into buildings.

“It is not unreasonable for our community, for our children, to want to feel they can lock a door if a threat presents itself.” “,”additional_properties”:{“comments”:[],”inline_comments”:[]},”_id”:”3MR274DB5FCK5OWTDQFIY5BJBM

Officials are training staff on how to safely let people into schools. Everyone must be buzzed in and have their ID scanned against known offender databases. In high schools, all visitors now will have to go through the metal detector, though it remains up to individual schools whether all students too must enter through them.

“We’re focused on visitors, where we have seen more of the risk,” said Perkins-Cohen, adding that officials want to ensure “we are really controlling access.”

Other issues — including fixing all classroom doors — will have to be handled in coming years, Perkins-Cohen said.

The security assessment was required under the state’s Safe to Learn Act of 2018. The law mandates each school system conduct a safety evaluation for each building and identify any patterns of concern.

The General Assembly passed the law in response to the school shootings that have plagued the nation and this state. Just a month after the deadly Marjory Stoneman Douglas High shooting in Parkland, Florida, there was a fatal shooting at Great Mills High in St. Mary’s County.

Research shows the fear of another school shooting weighs heavily on the minds of students and parents, though they remain relatively rare.

An Education Next poll, published Tuesday with Harvard University’s John F. Kennedy School of Government, found less than half of parents and students are very or extremely confident there is sufficient security against a shooting at the child’s school.

Students, though, are less likely than their parents to think schools should take additional protective measures. The survey found 77 percent of parents, but only 63 percent of their children, would install metal detectors at every school.

There’s been heated debate in Baltimore over how to best protect students from a potential school shooting, including a perennial fight over whether to arm the district’s school police force.

Shortly after the Douglass shooting, the city school board reversed its stance on the subject and voted in support of allowing officers to carry guns while patrolling the halls. But the power to allow this change lies with the General Assembly andBaltimore lawmakers voted down the legislation last session.

“Beyond guns or no guns,” parent representative Joe Kane said, “how do we make sure schools are secure in the first place?”