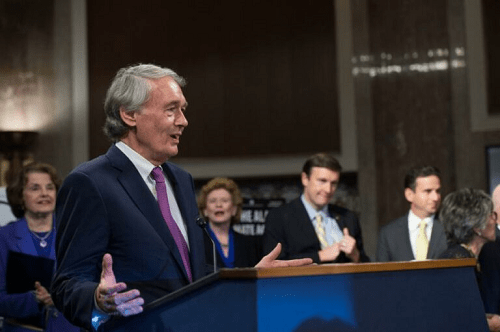 News reports detailing the relationship between Amazon-owned Ring and police departments are raising eyebrows in Washington D.C. and at least one federal lawmaker wants answers.

Sen. Ed Markey, a Democrat from Massachusetts, sent a letter to Amazon CEO Jeff Bezos Thursday asking for information on the Ring surveillance footage that police are increasingly using in investigations. Markey is concerned about “troubling” reports of Amazon marketing Ring products and its facial recognition technology to law enforcement agencies. He’s the latest in a series of activists and politicians to sound the alarm over Amazon’s relationship with police.

Last week The Washington Post reported that Ring has established partnerships with more than 400 police departments across the country since launching its law enforcement program in 2018. Amazon acquired Ring, the California-based home security startup, in April 2018.

The partnerships allow police to request surveillance footage from Ring customers’ doorbell cameras within a specific timeframe. Customers can decline the requests. CNET reported Wednesday that police can share the footage with other law enforcement agencies without informing the civilians who provided the footage.

Markey references both reports in his letter to Bezos. Amazon did not immediately respond to GeekWire’s request to comment on the letter. Ring is reviewing the letter from Markey but declined to comment for this story.

“The integration of Ring’s network of cameras with law enforcement offices could easily create a surveillance network that places dangerous burdens on people of color and feeds racial anxieties in local communities,” Markey said in the letter.

The integration of Ring’s network of cameras with law enforcement offices could easily create a surveillance network that places dangerous burdens on people of color and feeds racial anxieties in local communities.

Markey asks Bezos how Ring communicates with its customers about working with the police. The senator is also probing Amazon for details on how and when law enforcement agencies share surveillance footage with one another. The letter asks for a list of law enforcement entities that have accessed Ring footage and whether Amazon is planning to integrate its facial recognition technology with any Ring products.

Amazon has a separate facial recognition product that it markets to law enforcement agencies and other customers. Activists have long criticized Amazon’s facial recognition technology, claiming it amplifies human biases against women and people of color. Amazon disputes those claims.

“I am particularly alarmed to learn that Ring is pursuing facial recognition technology with the potential to flag certain individuals as suspicious based on their biometric information,” Markey writes. “In light of evidence that existing facial recognition technology disproportionately misidentifies African Americans and Latinos, a product like this has the potential to catalyze racial profiling and harm people of color.”