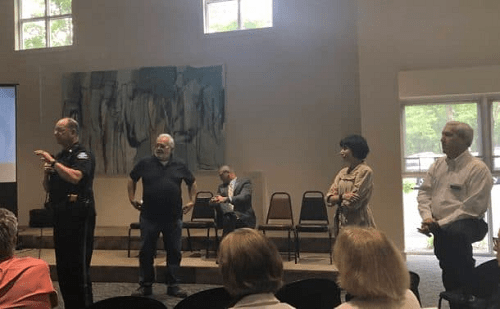 Sandy Springs police and elected officials defended the upcoming burglar alarm verification requirement at a May 1 public meeting where residents expressed fear it could jeopardize their safety and privacy.

The verification system requires alarm companies or residents to provide direct confirmation that a burglar alarm is a real crime with audio or video devices or in person. Some residents oppose this system and have been calling for the city to reverse it before it takes effect June 19.

But officials said at the meeting, which was held at Highpoint Episcopal Community Church by the High Point Civic Association, that there are no plans to change the policy.

“The policy has been adopted and it’s going to go into effect June 19,” Councilmember Andy Bauman said. “I think what’s really important here is for everyone to understand the best way to comply.”

The verification requirement is part of the city’s new alarm ordinance that shifted fines for repeated false alarms to the security companies who service the alarm systems, rather than residents and business owners who use them. The verification piece was added in 2018.

The city says it gets thousands of alarm calls a year, of which about 99 percent are false, tying up police officers and firefighters and costing enormous sums of money.

Police Capt. Dan Nable, who has been leading the alarm policy changes, said previous efforts to curb the false alarm rate, including fining residents and using the alarm industry’s model ordinance, were not successful. The city saw an initial decline, but overall didn’t make much of a difference, he said.

“It didn’t do anything to reduce the sheer numbers of calls that were coming in,” city spokesperson Sharon Kraun added. “Residents loudly complained because they were being fined.”

Requiring verification has been controversial with residents and alarm companies, though the city says companies are now cooperating with the new requirements.

Nable said some companies have said they will no longer do business in Sandy Springs, while others say they want to be “good partners” and work with the city on complying.

The city can’t directly recommend certain companies over others, Nable said, but he encouraged residents to shop around to find the one that provides options and a price that works for them.

Some residents have complained about the additional cost they will incur to install the audio or video equipment to comply with this ordinance.

“No offense, but I think we’ve invited the fox into the henhouse on this,” a resident said. “They’re going to make a lot of money off of this.”

Nable said some companies are more affordable than others and self-monitoring systems can be cheaper. The self-monitoring equipment would also be good for people with privacy concerns since a company wouldn’t be watching the feed, he said.

Adding a private guard service is also an option. Councilmember Tibby DeJulio said a letter from his alarm company stated it would be contracting with a guard service at no additional cost to customers. But customers would be charged if the guard responds to a false alarm, he said.

The other main concern residents aired is that the requirement could entice criminals by alerting them that the city won’t respond until the alarm is verified.

“I think this is good intentioned with unintended consequences,” a resident said.

Crime statistics from the several cities that have implemented verification have not seen a rise in burglaries, Nable said, and studies have shown that criminals typically don’t plan what house to break into far in advance. A security company sign is usually enough of a deterrent, he said.

“I think we’re giving them more credit than they deserve,” Nable said.

Chief Ken DeSimone also said that he has not known one case where a burglar was caught because of a security alarm.

Verification is not needed for 911 calls, medical, panic and fire alarms, and the fire and police departments will still respond to immediately to those.

Bauman said the verification requirement will lead to a faster response because the city will not be responding to unverified alarms. And if criminals hear that the city is able respond to quicker, that should also be a deterrent, he said. He said he “genuinely believes” response times for all calls will get better and that will be a benefit for everyone.

“When I need an ambulance to come get me or a loved one, I want to know that they’ll get there as fast as they can,” he said.