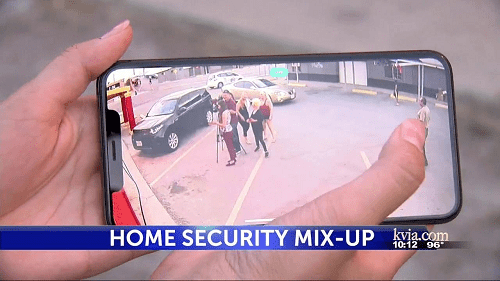 A Westside family is surprised to find out when they activate their new Vivint security system it shows them the inside and outside of a Lower Valley bar.

Monica Castro who does not own a bar couldn’t believe what she was seeing.

With a little detective work though she found out the name of the bar and where it was located.

The reason why we were able to see the business is because we zoomed into the camera and saw the name of the business inside. ​​​So I told my husband you know what, I think we should just go down there and talk to them and let them know what is going on.”

The El Escandalo located on 7573 Alameda were also having problems with their new Vivint security system.

Apparently their alarm was being turned on and off.

When the Castro family arrived to explain what was going on, it all made sense to the Maria Elena Garcia.  Garcia is the manager of the bar and also lives behind the establishment.

The Castros’ and Garcias’ decided to get an alarm system after the massacre that took place August 3 at the Walmart in El Paso, Texas.

Vivint though was not able to fix the problem immediately they contacted both parties and came to an arrangement.

The company said in a statement today, “We take these matters very seriously.  We have corrected the error and are working directly with the customer.”