The thief fell right on top of the TV — then could barely manage to jam it into getaway car. Watch the video

A package thief in Fort Washington, Maryland, got away with a huge 4K TV — but not without a serious struggle with the unwieldy box caught on surveillance video.

“It was ridiculous,” said Marsedah Diggs, who ordered the TV from Walmart. “Everyone else who saw the video was laughing at the time. I wasn’t laughing.”

The blurry video then appears to show a clearly labeled Sharp TV with a 65″ 4K Screen. The packaging doesn’t do anything to obscure the contents. 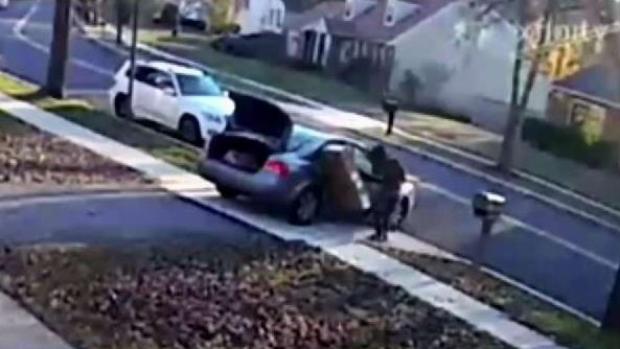 Surveillance video from Fort Washington illustrates just how determined crooks can be. This one doesn’t have a particularly good plan on how to get a 65-inch flat-screen TV from a porch to his car, but eventually he drove off with half of it sticking out his open rear passenger door. News4’s Chris Gordon spoke with the woman whose new TV he took.

The thief was forced to fully extend his arms to lift the huge box.

Almost to the getaway vehicle, the thief tripped and tumbled right onto the TV, which landed on the ground. Like a true cat burglar, the thief landed on all fours — slamming the box with both hands and at least one knee.

It’s unclear if the TV — a model that costs at least $700 on Sharp’s website — survived the fall.

“He’s an idiot,” Diggs said. “He’s an idiot. That’s all I can say, and I hope he broke that TV into a thousand pieces by the time he got it to his destination.”

The thief didn’t take the time to check. With pants falling to the ground, he picks up the box again and starts shoving it into the back seat of the getaway car.

It won’t fit, and he pops the trunk, but it’s way too large for the trunk and falls to the ground again.

Several deliveries were swept off the doorstep of a Georgetown home in a criminally bold dance performance we’re calling the package thief shuffle.

After an extensive struggle on Gable Lane, where two cars pass the crime scene, the thief gets the TV halfway into the back seat.

TV protruding, door open and trunk flapping in the wind, the thief hops into the passenger seat and the car speeds off, likely driven by an accomplice.

As the car drives down Gable Lane, the trunk shuts itself, and the TV somehow hangs on.

When Diggs didn’t receive the TV, she tracked it and learned it had been delivered by FedEx days earlier.

“I called Walmart. They were the first people I called,” she said. “And that’s when I found out about there policy, ‘Oh well, we don’t require a signature.’”

She did get a free replacement TV from Walmart.

Porch Pirates: How to Protect Your Packages 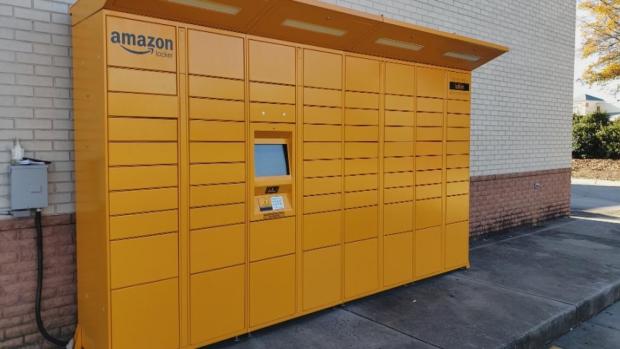 This is a record holiday season for online shopping, which means more packages than ever will be arriving on consumers’ doorsteps. New technology can deter porch pirates and help keep packages safe.

“I got my TV, but this guy’s still out there, and who knows who else he’s doing this to,” she said. “I’ll be happier if he gets caught.”

The theft occurred one week after Thanksgiving.

Prince George’s County police say they have seen an uptick in package thefts as Christmas approaches. They recommend shipping valuables to work or working with the carrier to select a pickup at the store or elsewhere.