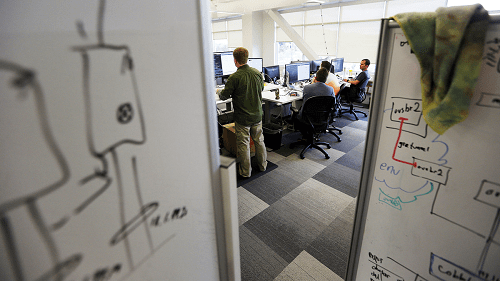 After nearly a decade of dominating the list of U.S. patents earned by Utah companies and institutions, the University of Utah is a rare runner-up behind the 2018 patent champs — home automation specialists Vivint Smart Home.

Vivint’s accomplishment is especially noteworthy as just five years ago its total patent count came in at just one, according to the company.

“The things that matter the most strategically, from a product and technology perspective, is the seemless integration of a smart home,” Warren said. “It’s about making lots of different devices work together to do complicated things.”

While it wasn’t too long ago that homeowners were reliant on manually performing in-home tasks like adjusting heating and air conditioner settings, locking doors and windows, turning off lights and arming alarm systems, Vivint has developed technology that will do all of those things for you.

But, the systems even go a step beyond that.

The artificial intelligence behind the system is capable of learning home habits and even using sensor information, for example, to recognize that no one is home and sending you a message to let you know that your doors are unlocked or that the garage door was left open.

The same smart processing will also learn your bedtime and wakeup schedule and make the right decisions about turning lights off/on and adjusting environmental controls. The company says the automation can also cut annual energy usage by over 10 percent.

In addition to the smarts behind the system, Vivint has also incorporated voice control capabilities that can sync with popular home assistants made by Google and Amazon.

Vivint says it has also distinguished itself among its smart home competitors, which include Google and Amazon, through a successful integration of products and services. That model likely owes much to the company’s original iteration, all the way back in 1999, as a residential alarm system provider. The company rebranded itself as Vivint in 2011, and in 2012 New York City private equity giant Blackstone Group acquired the company for $2 billion.

Vivint Chief Strategy and Innovation Officer Matt Eyring said the company has surpassed the $1 billion mark in recurring annual revenues, a measure of its success in vertically integrating its line of smart home products with monitoring services. It also offers financing packages for its customers and has struck partnerships in the last few years with brick-and-mortar retailers.

Eyring said the company sees itself as ahead of the curve in the burgeoning smart home market thanks in part to its ability to link products and services as well as the fruit of deep investment in research and development of new technologies, as reflected by the volume of newly minted patents.

“There was a hypothesis five or six years ago that the smart home market was just going to be about the products and the technology and services would take care of itself,” Eyring said. “The expectation was people would educate themselves on the devices, purchase and install them, customize the settings and, when things broke, just figure it out.

“That hasn’t turned out to be the case. That model winning at scale is one that is vertically integrated to include products and services.”

Warren said he believes the potential smart home market is enormous and current penetration is likely in the single digit percentage points. Market data service Statista estimates the smart home industry will grow from just over $31 billion last year to over $53 billion in 2022. The same report noted there were some 1.2 billion connected smart home devices in active use in 2018.