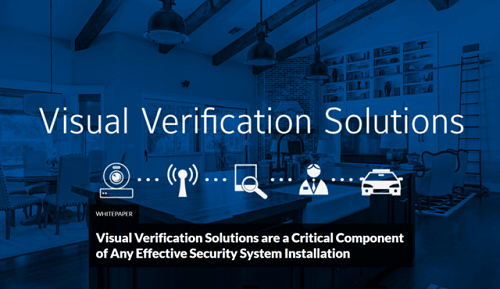 The days when police would respond to every alarm are almost gone. Across the US and Canada, more and more local jurisdictions are cracking down on false alarms. Many city and town authorities have issued verified response protocols or false alarm programs.

High winds, low batteries, dust, wind, racoons, and even balloons: there are many things capable of triggering a security alarm. With the majority of activations triggered by user errors, such as forgotten codes and windows left open, regulatory bodies and policing groups are looking to visual verification as a force in the deterrent of property crime.

“Verifying alarms has been an issue for years,” says Patrick Straw, a former Royal Canadian Mounted Police (RCMP) officer with three decades in the security business. In his current role as Executive Director of the Canadian Security Association (CANASA), a national not-for-profit organization, Straw works with police services across the country to protect Canadians and their property. “As an association, we are committed to educating our member companies to understand exactly what happens when an alarm is activated,” he explains.

In a house, for example, there are usually sensors on accessible doors and windows. Doors are typically on a timer that begins a 30 to 60 second countdown when activated, while the alarm system is beeping or emitting warnings by voice. There is no alarm if the system is disarmed within the countdown period. If the warning time elapses before the system is disarmed, most security companies use two-call verification, which means they have two numbers to call in order to verify the validity of an alarm.

“The flaw in the system is human error and it affects everyone,” says Richard Gilroy, owner of RG Systems Ltd, a security company in Dartmouth, Nova Scotia. During his 30-year career with the police force, Gilroy attended hundreds of false alarm calls and saw the price they exacted. “Not only do false alarms increase costs for police, but they also damage the installer’s reputation, impact sales, and jeopardize property owners by resulting in lower priority police responses,” he says.

MAKING A CASE FOR ALARM VERIFICATION

In an effort to maximize the value of security systems, cities around the world have begun recommending that alarms be verified prior to dispatching police. Some have given these recommendations teeth by creating policies to make verification a requirement. Home Alarm Report, a website that reviews home security and smart home products, identifies more than 50 American cities that now require a verified response, including San Jose (California), Milwaukee (Wisconsin), Las Vegas (Nevada), Eugene (Oregon), Yakima (Washington), and Detroit (Michigan).

In Ontario, the Guelph Police Service requires that security alarms be verified prior to police dispatch. Edmonton and Calgary, Alberta enacted similar policies in 2017. After instituting a revised Alarm Services Bylaw and introducing an annual fee for alarm system permits, service calls decreased in Calgary by 54% from the same period the previous year. Alberta’s RCMP followed suit with revisions to their alarm policy and now require verification.

Similarly, as of September 2018, the Toronto Police Service (TPS) will only respond to burglar alarms if there is validation that criminal activity is occurring/has taken place, or if there is an imminent threat. That validation may come from private security services, eyewitnesses, multiple zone activation, and visual verification through audio/video devices.

“This type of approach is widely used in the United States and is becoming increasingly common in Canada,” she says. “Prior to implementation, we consulted widely with CANASA and the Underwriters Laboratories of Canada (ULC) to identify problematic issues and incorporate best practices.”

In an early example from the United States, Napa Valley made the news in 2010, not for wine, but for the way enhanced video alarm technology was making local lawmakers more efficient and resulting in more arrests. Thanks to a wireless video alarm system, the Napa County Sheriff’s Office broke up an organized ring that had stolen thousands of solar panels from area wineries.

“The technology today is much less expensive and far more powerful,” says Gilroy. “Most of my business clients opt for motion-activated cameras that stream live to apps on their phones and computers.”

As evidence of this trend, Gilroy reports that cameras were the biggest attraction at the recent International Security Conference in Las Vegas, Nevada, an international trade fair described as the Super Bowl of Security.

“There are several reasons for that,” says Steve Shapiro, General Manager for Tyco residential and commercial security products at Johnson Controls, a leader in bringing enhanced visual verification technology to the global market. “Modern security cameras are easy to install, simple to use, and take far better pictures than earlier models. Last, but not least, they support innovative technologies, such as self-monitoring apps and can be less intrusive with very short video clips.”

THE LATEST IN WIRELESS TECHNOLOGIES

Shapiro describes Tyco’s PowerG wireless PIR cameras. “Our cameras work in conjunction with passive infrared sensors (PIRs). When the motion detectors are activated, they quickly send a digital alarm along with 5 seconds of post-alarm photo clips to a monitoring station equipped with a Sur-Gard System 5 Receiver,” he explains. “Both residential and commercial users can connect to an app and remotely monitor what is happening on their property and make decisions as if they were there in person. This reduces the possibility of a costly false alarm and improves the likelihood of a quick response.”

Unlike most of the systems sold by large retailers, these are not look-in cameras that can be viewed via the internet. These PIR cameras connect to Sur-Gard-System 5 receivers which encrypt images, making them resistant to hackers. According to Shapiro, there are other advantages, as well. Not only is the Sur-Gard System 5 receiver more secure, but it is also more effective in communicating with stakeholders and reducing the number of resources used to confirm the validity of an alarm.

Camera-equipped PIR motion sensors capture images at the site of the activated alarm and transmit those images in real time to the Central Monitoring Station (CMS) for verification. If an actual threat exists, the CMS may forward the footage to either the police or a private guard company for prompt deployment. Compared to continuous live feed monitoring with CCTV, visual verification systems are less expensive, making them more attractive for residential applications. Homeowners also appreciate the fact that the cameras only capture images in the event of an alarm, thereby assuring more privacy. Commercial appeal comes from the price as well as the ability to monitor multiple cameras and promote faster response times.

REAPING THE BENEFITS OF A VERIFIED

Cities that have gone to alarm verification are already reaping the benefits. Salt Lake City, Utah saves about $500,000 each year by requiring private alarm companies to validate alarms before police will respond. The Milwaukee Police Department adopted a Verified Response Policy and saw the number of burglar alarm dispatches per year go down from more than 30,000 to only 620. Fees for alarm registration and penalties for false alarms combined with enhanced verification have reduced the Washington state city’s number of false alarms by more than half.

With ongoing disruptions in video and apps, the security world is focused on using sophisticated visual verification solutions to protect points of entry and property. As with any technology, flexibility is critical. The best advice for property owners is to look for a security partner with a reputation for service and the ability to offer a wide array of scalable video surveillance solutions.

“It really boils down identifying the cause of an alarm,” says Steve Shapiro. “Motion sensors and multizone notification is helpful in reducing police dispatches, but it doesn’t provide the true verification found in video. As a result, police organizations have begun to implement priority response policies a way to encourage property owners to install video verified alarms.”

The goal, says Shapiro, “is to validate the cause of alarm activation by turning remote security system operators into eyewitnesses. This will ensure a faster police response for crimes in progress, help first responders assess the situation before arriving on the scene, increase their safety, and assist in arrests: everything you’d expect of a top rate security system.”

Johnson Controls’ Building Technologies & Solutions is making the world safer, smarter and more sustainable – one building at a time. Our technology portfolio integrates every aspect of a building — whether security systems, energy management, fire suppression or HVACR — to ensure that we exceed customer expectations at all times. We operate in more than 150 countries through our unmatched network of branches and distribution channels, helping building owners, operators, engineers and contractors enhance the full lifecycle of any facility. Our arsenal of brands includes some of the most trusted names in the industry, such as Tyco®, YORK®, Metasys®, Ruskin®, Titus®, Frick®, PENN®, Sabroe®, Simplex® and Grinnell®.