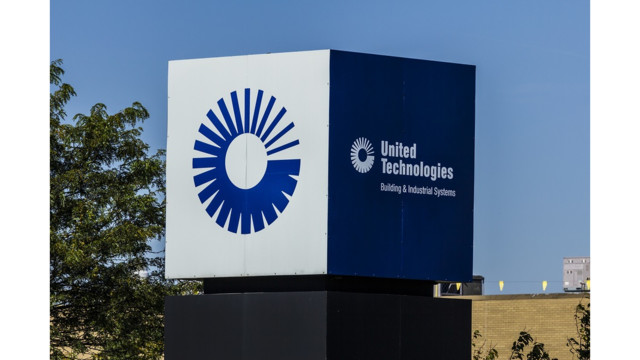 United Technologies Corp. on Monday announced that it is separating into three independent companies following the closing of its $30 billion acquisition of aerospace firm Rockwell Collins. UTC Chairman and CEO Greg Hayes also confirmed that the company is exploring the possibility of divesting the fire and security “field” business from Carrier prior to the official spin-off.

United Technologies Corp. on Monday announced that it is separating into three independent companies following the closing of its $30 billion acquisition of aerospace firm Rockwell Collins. Following the separation, UTC will continue to operate as an aerospace company comprised of the Pratt & Whitney and newly created Collins Aerospace Systems businesses, while Otis elevator and Climate, Controls & Security (CCS), to be renamed Carrier, will be spun off.

In a conference call with investors on Tuesday, UTC Chairman and CEO Greg Hayes also confirmed that the company is exploring the possibility of divesting its Chubb Fire & Security Field Services business from Carrier prior to the official spin-off. According to a company spokesperson, the Chubb Field Services business includes the firm’s fire and electronic security installation, service and monitoring capabilities.

“That’s roughly $2.5 billion of sales at a roughly 10 percent margin kind of business,” Hayes said. “The focus of Carrier going forward is going to be on products and services, not on installation in the field. As we think about the portfolio, if we choose to divest of the (fire and security) field business, it will be to give us a better focus going forward on our products and services portfolio. We like the fire products, we like the security products, the refrigeration and the transport piece – all of those other pieces of Carrier beyond just commercial and residential HVAC.”

According to Jim McHale, Director of UK-based market research firm Memoori, while conglomerates like UTC built up “substantial operations” in the global fire and security products market from 2000 to 2010 through acquisitions, their performance in the industry has since waned.

“Since then the performance of conglomerates has declined, particularly in the physical security business, some have sold off these businesses, such as GE. Tyco has merged with Johnson Controls. Siemens sold their security products business to Vanderbilt.  So UTC spinning out Carrier (including Fire & Security) is not particularly surprising,” McHale said. “Carrier is very capable of being a profitable standalone business. Indeed, somewhere down the line, Carrier may even divest some product brands to focus on solutions. They would probably realize a good return and find buyers from private equity.”

A Defining Moment for UTC

Hayes said the board’s decision to pursue a separation of the existing company is a “pivotal moment” in the company’s history that follows a more than year-long evaluation of their portfolio. The separation of UTC has also been sought by several activist investors of the company.

Hayes also emphasized that the separation will enable each company to create its own capital structure and make capital allocation decisions to suit their own individual business models.

“I think it’s important to reiterate that these three businesses are already leaders in their respective industries,” Hayes added. “There’s no weak sister here that we’re worried about going forward and each of these businesses will have a greater opportunity to build on their own histories of shaping industries as independent companies.”

Although he was initially hesitant about the idea of breaking up the company, Hayes on Tuesday said one significant thing that has changed with the Rockwell Collins acquisition is the ability of their aerospace business to stand on its own.

“We will now have an aerospace business that will have sales of roughly $50 billion by 2020 and that gives us the ability, with that scale, to think about a standalone aerospace business. We’ve always known that the Carrier and Otis businesses could be standalone but we were always concerned about the aerospace business because of the very long cycle of the investments and cash returns, so I think we always thought we needed commercial businesses to support the aero businesses but with the scale the way it is today, that’s no longer the case,” Hayes said. “And the world has changed. I think we all recognize the fact that focused businesses tend to do better.”