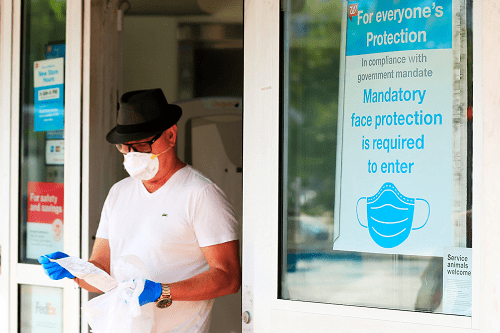 People working during the pandemic have filed thousands of complaints regarding their exposure to the novel coronavirus and a lack of safeguards at their places of employment, according to records obtained under a Freedom of Information request and reviewed by The Washington Post.

The employee complaints offer a snapshot of the fear experienced by the Americans compelled to work while the majority have been urged to stay at home, and they arise from an array of workplaces: hospitals, airlines, construction companies, call centers, grocery stores, beauty spas, pharmacies and shipping companies, among others.

Collectively, the records depict the desperation of the employees as well as their frustrations with employers who in their view were at best simply unprepared for a pandemic and at worst callously unconcerned with worker safety.

The records show worker concerns about shortages of masks and gloves, of being forced to work with people who appear sick, and of operating in cramped work areas that prevent them from standing six feet from one another.

“The call center with over 400 people is unsanitary,” one complaint reads. “Employees have to share desks and people are within 2 feet from each other.”

“In the behavioral unit, employees are not allowed to wear surgical masks because ‘it hurts patient’s feelings,’ despite the fact that patients come in with fevers,” says another from a California hospital.

“Delivery drivers are required to disinfect vehicles using personally bought chemicals, without been trained on the hazards associated with such activities and chemicals,” another complaint reads.

“The employer has not instituted protective measures to protect employees conducting facials and full body waxing from infectious diseases such as but not limited to COVID-19,” according to a complaint from a Florida beauty parlor.

“The company has stressed hand-washing for COVID19 precaution; but 4 different bathrooms were out of hand soap yesterday and hand wipes / sanitizer supplies were lacking,” reads another. “Managers simply say they are on back-order.”

The largest share complaints come from health-care workers: Some have been given “plastic ponchos” and masks made out of paper towels, they say; others report a lack of hand sanitizer or soap; pharmacists and technicians have been forced to work in proximity without protective gear. But the complaints span a broad variety of workplaces, including Yosemite National Park, factories and funeral homes.

Citing the Freedom of Information Act, The Post requested all worker complaints regarding the coronavirus filed with the Occupational Safety and Health Administration from January through early April. There were more than 3,000 such complaints filed. The records do not state what actions were taken as a result.
The actual number of complaints from employees about the coronavirus, however, is probably far higher because that data does not include the complaints from every state.

Democrats and workers’ groups have pressed the Trump administration to enact rules requiring employers to follow the Centers for Disease Control and Prevention’s safety guidelines for employers. The Labor Department has declined to do so, instead giving advice to employers that is not legally binding.

“The large number of complaints they have received is powerful evidence that workers across the country are terrified and frustrated that their employers are not providing them with safe workplaces,” said David Michaels, who was OSHA chief during the Obama administration.

The toll on workers has been startling.

More than 500 workers at the Smithfield Foods plant in Sioux Falls, S.D., have reportedly come down with the virus. Already there have been deaths of workers at a Trader Joe’s in Scarsdale, N.Y., a Giant in Largo, Md., and a Walmart in the Chicago area. At least 40 registered nurses have died in the United States, according to National Nurses United.

The conditions have set off worker protests across the United States, as employees demand extra protections — masks and gloves, for example — or hazard pay. Some of the first events arose at Instacart on March 30, when thousands of workers stopped responding to delivery orders. There have been protests by workers at an Amazon warehouse in Staten Island, at Whole Foods, at McDonald’s and several others.

Despite requests from unions and members of Congress, OSHA has yet to issue a specific coronavirus standard for employers that would protect many “essential” workers, leaving employers to come up with their own ways of trying to meet health guidelines.

The result has been a patchwork of precautions. Some stores let customers in without masks, others do not; some places offer employees masks, other have forbidden employees to wear them, either because that might scare customers or because they are in short supply.

In early March, OSHA issued a 35-page booklet with suggestions for what employers ought to do to protect employees: The documents tells them to “promote frequent and thorough hand-washing,” “encourage respiratory etiquette, including covering coughs and sneezes” and “provide customers and the public with tissues.”

It further recommends that when the virus is present in an area, employers should “consider offering face masks to ill employees and customers” and that health-care workers dealing with sick patients “should wear respirators.”

But the booklet notes that these precautions are not legal requirements.

“This guidance is not a standard or regulation, and it creates no new legal obligations,” the booklet begins. Instead, it points to general requirements for personal protective equipment and an employer’s “general duty” to maintain safe workplaces.

Health-care workers in particular have complained about the unsafe conditions, the records show. The complaints often revolve around a lack of masks and “negative pressure rooms” in which to isolate coronavirus patients.

Nurses do not have access “to proper protection equipment such as N95 masks and surgical masks,” according to one typical complaint from a Los Angeles hospital. “The employer is locking them away. Nurses have been denied the masks when handling patients.”

Another OSHA complaint came from hospital in Windham, Conn., where a health-care worker was asked to work on a floor with covid-19 patients. Before entering a patient’s room, the worker picked up an N95 mask from the hospital supply, but was then told to put it back and use only a basic surgical mask, according to a complaint filed with OSHA.

That worker has since tested positive for covid-19, the disease caused by the coronavirus, said John Brady, executive vice president of AFT Connecticut, a union that represents teachers, nurses and others.

“The employer has denied employees adequate Personal Protective Equipment (PPE) resulting in at least one employee (maybe more) contracting the COVID-19 virus,” according to the complaint.

Similarly, a surgeon at a New England hospital was told by management that he was breaking hospital policy by insisting that a patient with covid-19 wear a surgical face mask while coughing, since hospital policy dictated these masks only be given to positive patients while they are being transported, according to a physician at the hospital who had direct knowledge of the interaction and spoke on the condition of anonymity because of fear of retaliation from his employer.

Staffers at the hospital are widely fearful that their attempts to speak up about dangerous shortages in protective equipment will lead to retaliation, and are concerned complaints to federal safety inspectors will fall on deaf ears, they said.

The growing fears among workers has led to anger regarding what they say is the absence of forceful federal enforcement of rules requiring to keep workplaces safe.

A worker at a poultry plant in Camilla, Ga., filed a complaint to OSHA weeks ago, raising concerns about plant workers standing shoulder-to-shoulder on the assembly line, according to Edgar Fields, president of the Southeast Council of the Retail, Wholesale and Department Store Union, which represents poultry workers. Three employees at the plant have died of coronavirus, Fields said, but the workers’ groups have not heard from federal safety inspectors.