The Pros and Cons of Facial Recognition Technology in AV

Certainly, there are places and reasons why facial recognition can help but do we really need it in sports arenas, donut shops and even shopping malls?

Those of you familiar with my blogs likely are familiar with how technology sometimes really creeps me out. Atop the list of my tech paranoia are autonomous vehicles. Not too far behind that is facial recognition.

A recent Twitter conversation started by Alesia Hendley of Access Networks centered around a hearing in which New York Congresswoman Alexandria Ocasio-Cortez outlined the reasons she opposes the use of facial recognition technology got me thinking again about the topic.

Hendley asks, “Do we compromise privacy, being misidentified, or even stereotyped all for the cause of great use cases?”

Politics aside, I just don’t understand why I’d need to use my eyeball or my fingerprint to enter a baseball stadium and I would much rather wait a few minutes for my order to be ready at my local donut shop than for a picture of my face to lead to my food being ready when I arrive.

I know that smacks of a “get off my lawn!” sentiment in an age where we all have a lot going on and are using technology whenever possible to cut down on the milliseconds we need to wait for something. Then again, it’s kind of what you’ve come to expect from me, isn’t it?

While I’m pretty entrenched in my opinion of the need for facial recognition—or the lack of it, to be more specific—several #AVTweeps shared their thoughts with Alesia about the topic after her Twitter post last week. There are cogent points on both sides, so it’s up to you to decide.

“If I can walk into a donut store and have an apple fritter waiting for me at the counter, because they know my face and what I want, I won’t complain,” tweeted Luke Jordan of Electro Acoustics. 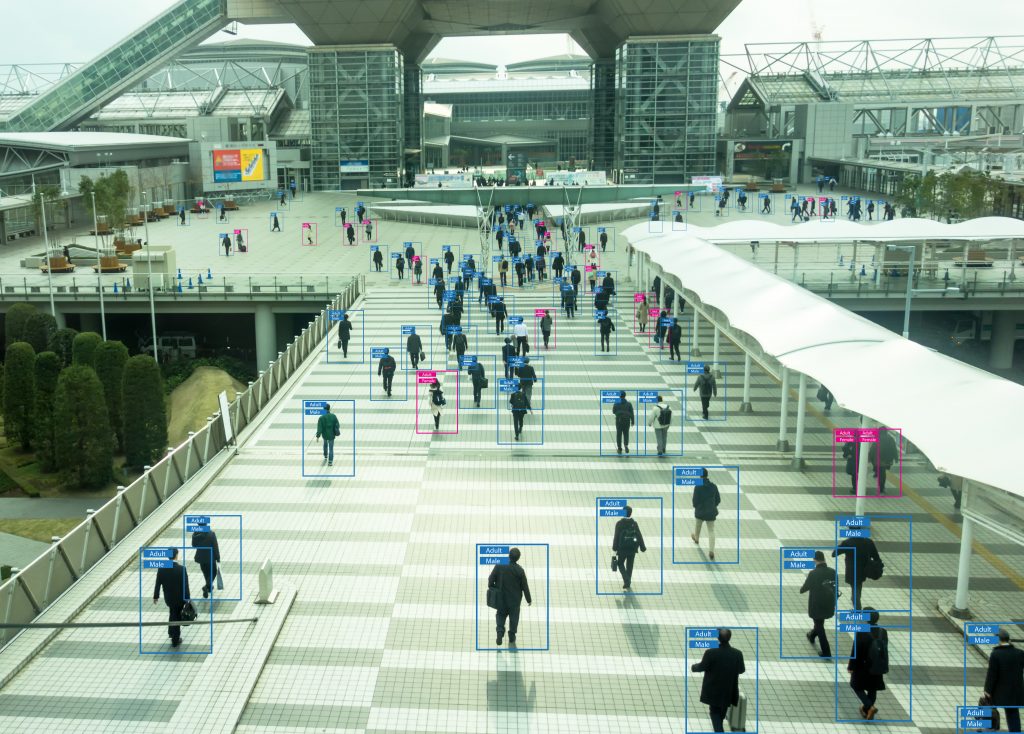 “AVA has a long way to go before it becomes accurate as there seems to be quite a bit of contributing factors that throw off accuracy of the analysis,” he tweeted.

Mad Systems says it’s developing a facial recognition system that’s anonymous in terms of identifying specific people, but it can still deliver the AV content they need when they need it.

The patent-pending technology would allow museums, for example, “deliver the right language, the right material (3-5-year-olds, 6-8-year-olds, adults, etc.) without having to know anything about you. At night, your vectors are scrubbed.

“The patents relate to facial, color, pattern and license plate recognition base media delivery and something we call the LookingGlass Concierge, which is more related to using recognition systems to improve customer service in many different ways,” according to Mad Systems.

The technology will “use encrypted vectors (does not need to store pictures), and does NOT need to be internet-connected – so privacy can be guaranteed,” according to the company’s Twitter feed.

That means “no surveillance, no spying, no leaking of information, no hacking.”

“There is definitely a use case in retail,” says AV consultant Gabriel Moronta. “You want to know specifically how many people are going in, what type of person is going into a specific place, whether man or woman. But then the pitfalls are obvious misuse.

“There is a use case for law enforcement as well in this day/age of terrorists—[2013] Boston [Marathon] bombing comes to mind [because] they needed to identify the suspects. But, again, the risk for misuse by those entrusted to use it is so great,” he tweeted.

“There is a use case for it at every level, but then there is also an argument against it at every level,” says Moronta. “Personally, I don’t have anything to hide, but I know that a lot of people don’t feel that way and have very valid reasons for being afraid. We need to respect that, and hear them out and come up with a solution.”

The Good, the Bad and the Ugly

“I really don’t want my ugly mug being used to market to me,” he tweeted. “But even worse is our government having untethered access to this kind of data for ‘security’ purposes. I really don’t like the Walmart self-checkout registers having my photos.”

Will Amos of Diversified Digital Media Group embraces the use of facial recognition.

“Whether we like it or not, there will be a lot of debate for a while, while people familiarize themselves with it and then it will slowly standardize,” he says.

Patty Wanzer of Synigize isn’t fazed by the proliferation of facial recognition.

“Personally, I don’t care [because] there are cameras everywhere recording you so why does it matter if it identifies me a middle-aged female? If it means more security, more money towards aging America or to serve my needs better, I’m all for it,” she tweeted.

Surely, there will be plenty more discussion on the topic of facial recognition as it becomes more prominent in solutions of all types across the AV spectrum.

Whether you like it or not, it’s coming and there’s not much you can do to avoid it—kind of like that runaway autonomous vehicle that just hopped the curb and is headed right for you.

Craig MacCormack is a veteran journalist with more than 20 years of experience covering local and national news and sports as well as architecture and engineering before moving into his current role. He joined Commercial Integrator in January 2011.