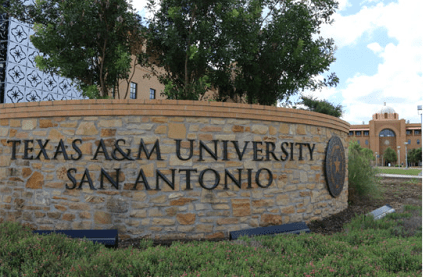 Texas A&M University-San Antonio (A&M-SA) has become the first university in the world to deploy an Indoor Positioning Solution across its entire campus for the purpose of providing the safest possible environment. The SafeZone® indoor positioning solution, provided by CriticalArc, provides the campus police with an unprecedented three-dimensional view of multi-story buildings.  For example, instead of receiving an alert about ‘an incident somewhere in the student union building’, they get pinpoint specifics, such as ‘it’s on the fourth floor, west wing, outside room 410’.

“With indoor positioning and SafeZone, we’re able to provide a faster response time, whether it’s a medical emergency or an active shooter,” says Roger Stearns, A&M-SA’s assistant chief of Police, featured in this video.

The university’s Chief of Police Ron Davidson wanted to innovate with this full-coverage system because the campus was expanding, including a newly completed residence hall, which meant having students around the clock for the first time in A&M-SA’s history. He was committed to ensuring a safer environment for students, staff and visitors.

In addition, Chief Davidson was in search of a common operating view that would provide the Emergency Operations Center and all officers on patrol a real-time location of all available officers and volunteers, as well as showing the location of all incidents ̶ essential for coordinating first responders and the Campus Community Emergency Response Team (CCERT).

“SafeZone is an essential technology to position your organization on the cutting edge of campus law enforcement. The real-time common operating view both enhances officer safety and acts a force multiplier. Plus, the entire police department benefits from advanced features such as heat mapping and incident playback to optimize performance,” Davidson said.

Texas A&M-San Antonio has adopted the indoor positioning solution as a standard and will deploy it in all future buildings on campus.  The solution is fully supported by the University’s Information Technology Department and has been assessed for additional applications to enhance the student experience including wayfinding and research by academics in the newly completed Science and Technology Building.

SafeZone was easy to deliver with no disruption to the campus. It was deployed in a matter of weeks during the summer break. “The process to get the SafeZone indoor positioning solution deployed is a simple one, as it’s a wireless installation and easy to maintain,” added Stearns. Organizations can install wireless, wearable duress alarms able to pinpoint anyone anywhere on campus as an alternative to fixed, expensive, wired panic alarms.

Among other capabilities, SafeZone allows users to get the most rapid help simply by activating an alert, using an app or a wearable duress alarm. As soon as the alert is triggered, the location and details of the user are streamed to the monitoring team, allowing officers to coordinate a smarter, more targeted response. By enabling responders to visualize the precise location of an incident, anywhere on campus, SafeZone is much more powerful than traditional, fixed panic alarms and blue light telephones, which are more expensive to install and less accurate in operation.

Glenn Farrant, Chief Executive Officer, CriticalArc, notes; “I’m delighted by the close partnership between A&M-SA and CriticalArc resulting in this ground-breaking implementation of the SafeZone public safety solution. Chief Davidson and his team are at the forefront of using this technology and we are pleased to be helping them improve the quality of life, and the learning experience, for everyone on their campus.”

The SafeZone indoor positioning solution is commercially available worldwide for a range of university, hospital, enterprise and finance applications and is being deployed in more than 80 countries worldwide.

CriticalArc is a global technology innovator and the creator of the distributed command and control solution, SafeZone®, which has been adopted by dozens of universities and enterprises across the world to help ensure the fastest possible emergency and safety support for students and staff by providing easy, direct access to responders. SafeZone fundamentally changes the way businesses manage safety and security operations across multi-site organizations and dispersed campuses, allowing a proactive response that positively impacts the outcome of any incident.

Headquartered in Sydney, Australia, CriticalArc has offices and operations in North America and the United Kingdom, providing an international delivery capability and reach. For more information on CriticalArc and SafeZone, please go to www.criticalarc.com, email contact@criticalarc.com or telephone +1 800 985 9402.