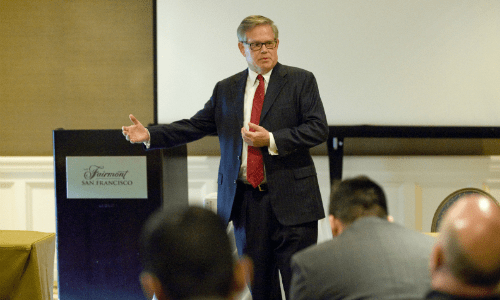 Mitch Reitman is a frequent speaker on business and financial topics at local meetings as well as state and national conventions. (CAA)

Reitman will formally receive the award at the Roast & Toast Dinner as a part of the TBFAA convention to be held in Rockwall, Texas, in October.

The Texas Burglar & Fire Alarm Association (TBFAA) has named Mitch Reitman, a financial and accounting adviser, as the association’s 2019 Person of the Year.

Reitman was selected for his long-term service to TBFAA and his industry involvement with a multitude of industry associations, according to an announcement. He will formally receive the award at the Roast & Toast Dinner as a part of the annual TBFAA convention in Rockwell, Texas, in October.

Reitman was inducted into the SSIIndustry Hall of Fame in 2017. He is also a member of SSI’s editorial advisory board and a contributing columnist to the magazine. He began his involvement with TBFAA as a member in 1996 and joined the board as financial adviser in 2007. Over the years he has served on the association’s convention and legislative committees. He has also worked with TBFAA and local associations to setup and administer a scholarship program for children of public safety officers.

For over 20 years, Reitman has been actively involved in local, state and national security trade associations and held leadership roles on boards with Electronic Security Association (ESA) and the Alarm Industry Research and Educational Foundation (AIREF).

Reitman is a frequent speaker on business and financial topics at local meetings as well as state and national conventions. He also served as a city councilman for Coppell, Texas.

Reitman began his career at Coopers and Lybrand where he was an audit manager. He has worked in the security industry for more than two decades, including serving as vice president of acquisitions for Select Security and director of acquisitions and business development for Protection One. He is currently Management Principal of Reitman Consulting Group in Fort Worth.

You can view list of previous TBFAA Person of the Year recipients here.