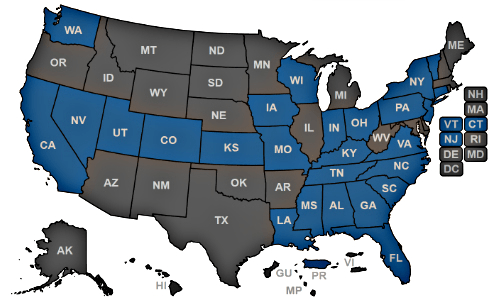 The Electronic Security Association’s (ESA) executive committee of the board voted to sunset the association’s state chapter program at a board meeting Monday, June 3. Each state chapter has a seat on the board, and 23 of the 27 chapters had representatives present for the vote, according to ESA Executive Director Merlin Guilbeau. While Guilbeau said the restructuring passed with a two thirds majority vote, some state representatives seem unhappy with the change.

“I’ve been the executive director of the Tennessee Electronic Security Association (TNESA) for 28 years, and we’ve always had a great relationship with ESA and have worked well together,” said Penny Brooks, executive director of the TNESA. “To me, it’s sad that they want to discontinue that relationship, but we are a strong association so we will do fine. We’re again concerned for the smaller states that rely on ESA for training and other services.”

While Brooks was not at the Monday board meeting, TNESA National Liaison Director Scott Brockamp was, and voted against the restructuring on behalf of TNESA. According to Brooks, neither she nor Brockamp received word from ESA of the possible restructuring until two weeks before the vote, when Guilbeau called to discuss the change.

In an impromptu press conference held at ESX on June 4 after news of the restructuring leaked, Guilbeau said ESA had been discussing the change for a while now.

“Just like any other industry, the association industry has trends and changes that take place,” Guilbeau said. “We’re living in a time now where volunteers expect different things than the old volunteers. They aren’t looking to do 20 years on the board of directors; they aren’t even thinking about becoming president, because they see you have to do 20 years to get to that point. So we’ve been talking about this for a long time.”

This talk, he said, began approximately six years ago when the chairman of CEDIA brought him the book Race for Relevance: 5 Radical Changes for Associations by Harrison Coerver and Mary Byers. He then had every ESA board member read it, and they all started asking questions about how they were going to transform to remain relevant to the industry in the future.

“Those topics that we learned in that book kept coming up, and we’ve attempted to implement those,” Guilbeau said. “For example, we are much more, as an association, technology-driven than we’ve ever been internally. We’ve invested in that and that was one of the concepts the book talked about.”

Guilbeau said that whenever ESA would come to the state chapters with changes they would like to make, the topic of the chapters’ independence continued to surface, “Even though they’re a chapter of ESA, we don’t own them, and they have their own board of directors, their own financials. We certainly provide some services and programming for them, but in the end, they’re their own organization. Their independence is important to them and they want to keep that.”

ESA and its chapters currently have a contingent relationship, meaning that a person cannot join the national association without joining the state association, and vice versa. But, as Guilbeau pointed out at the press conference, not every state chapter operates at the same level. Some chapters have staff, while others are strictly volunteer-driven. Some have their own financials, scholarships, etc., while others rely completely on ESA for these services.

“We started to realize the kind of relationship we need to have with associations is unique to each individual state,” Guilbeau said. “A state like California may not need our support as much as Vermont. So we need to adapt to that, and we can’t do that if we have a program that is one size fits all.”

Many state representatives, however, were concerned as to how the smaller states will survive without the contingency.

“We voted no,” said Mississippi Electronic Security Association (MESA) President Ed Trim. “The reason was we just felt that some chapters needed more time to get their education, insurance and billing ready. Even though Mississippi sent in our letter with intentions to succeed on March 27, we just didn’t think the smaller chapters had enough time to get their ducks in a row.”

California Alarm Association (CAA) President Tim Westphal chose to abstain from voting on the restructure along with three other state representatives. While he thinks the independence could be good for California, he had concerns about how this would affect the smaller states.

“I believe smaller states will have a difficult time getting their billing and training and scholarships organized by the end of the year, but we in California, we have our own billing, we have our own scholarships,” he said. “We thought the timing and speed of the decision could have been better, but we’re excited about the independence we will have, and I think this is a good thing going forward.”

“This really resonated with the executive committee that it’s probably time we take a hard look at this and make a change,” Guilbeau said. “I think one point we want to make sure is clear is we’re not saying we don’t want to have a relationship with states — that’s not the case. Any state association that wants to have a relationship with us, we’ll embrace that, and as long as it’s a mutually beneficial relationship, we think that will work, but it’s not going to be tied to an agreement. As an organization we’ll bring value to each other and believe it’s good for the members, because in the end that’s who we’re here to serve, the members of our organization and the industry.”

Brooks said TNESA will be exploring whether it will continue its relationship with ESA once the restructuring goes into effect Jan. 1, 2020.

“We are going to look at other providers of training and focus on what is best for Tennessee,” Brooks said. “ESA has expressed interest in continuing a relationship with us with training, but we’re going to figure out our best options and move forward from there. Our main revenue source is training; it’s required in our law and our dealers are required to complete approved training, so it is imperative Tennessee has a good, solid training program.”

Westphal said CAA will most likely continue to work closely with ESA.

“We’re very friendly [with ESA]; they handled this very professionally,” Westphal said. “Going forward, we’ll probably have a shared scholarship program and we’ll welcome ESA to our events . . . we’re excited to provide a great focus and value on California issues.”

Steve Autio, president of the Electronic Security Association of Washington State (WAESA), voted in favor of the restructure, and is looking forward to the change.

“This was a very difficult decision for me,” Autio said. “It’s sad to see the proud history of our chartered chapters end, but times have changed in the last 30 years. A one size fits all chapter agreement no longer works . . . In the long run, I look forward to a much stronger association — one where each state can negotiate customized agreements that benefit both the state and national, while allowing growth to each. We have a lot of work to do in the coming months, but with passionate volunteers who are dedicated to a better tomorrow for our industry as a whole, we have brighter days ahead.”

Brooks was not quite as optimistic, though she believes TNESA will be just fine without ESA.

“Personally, I just want to express the sadness I feel that this relationship has come to an end, and in a way, it has,” she said. “We have had a great relationship with ESA over the years. We’ve done everything asked of us from ESA, we’ve promoted every program they wanted us to promote and we have continually supported ESA with all the services they provided. As they say, all good things must come to an end.”