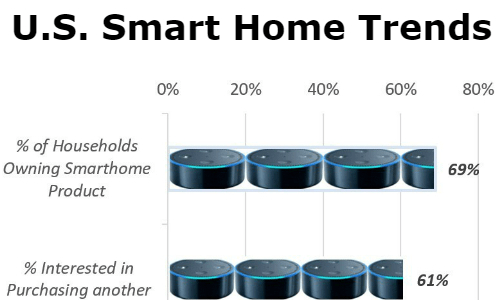 In a recent survey, more than 1 in 2 consumers in the U.S. reported feeling extremely or very comfortable with smart home products.

LOUISVILLE, Ky. — Internet-connected homes in the United States have gone beyond niche early adopters, with the majority (56%) of consumers reporting they feel comfortable with IoTtechnology, according to a new smart home survey by TraQline.

The survey covers not only penetration and purchase of smart home products, but the usage and attitudes of consumers — including who’s using the products and how often, according to a press release.

“Of the 2,045 households surveyed, nearly 70% owned a smart home product. For those smart products owned, over 60% of the time consumers are extremely interested or very interested in buying another,” states Brennan Callahan, director of national accounts for TraQline. “This shows the value consumers place on the convenience of smart home products.”

Other takeaways from the survey include:

The survey is said to provide additional usage and attitudes for 27 different categories, measuring attributes such as: why people purchase, who in household uses smart functions, type of devices controlled by Alexa and Google, importance of smart home features, features desired, and more.

Syndicated by market research firm The Stevenson Co., TraQline launched its smart home survey in November 2018 to capture consumer purchases and usage/attitudes of connected products. When combined with 300,000 TraQline U.S. respondents, the bi-annual survey billed as the largest of its kind.