In early July, the Internal Revenue Service unveiled a draft version of the postcard-size Form 1040 that was promised from last year’s tax reform effort.   This is the front page. 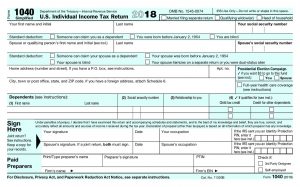 As you can see, it pretty much collects the information on the Taxpayer and filing status information.  No word yet as to whether a Taxpayer with more than two dependents will be able to use this form. 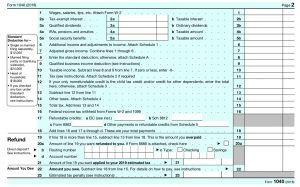 The simplified Form 1040 aims to streamline the tax prep process so all 150 million taxpayers can file the same type of form. The new form consolidates the three versions of the 1040 into a single form. The IRS will still get the information from each taxpayer needed to determine their tax liability or refund.

Although the form is postcard-size, it still asks for a taxpayer’s Social Security number, so it should still be mailed in an envelope to protect taxpayer privacy. With the popularity of electronic filing, it’s unclear how many taxpayers will opt to mail in the paper form anyway. Also, while the form itself has been shortened it may not actually simplify the tax prep process since it now requires attaching five other schedules, in addition to Schedule A for taxpayers who choose to itemize rather than taking the expanded standard deduction that was doubled by the Tax Cuts and Jobs Act.

Mitch Reitman is Managing Principal of Reitman Consulting Group, a firm that specializes in the Security and Systems Integration Industry.  He is a member of the Electronic Security Hall of fame and active in several local and state associations including TBFAA of which he is a board member. He can be reached at 817-698-9999.