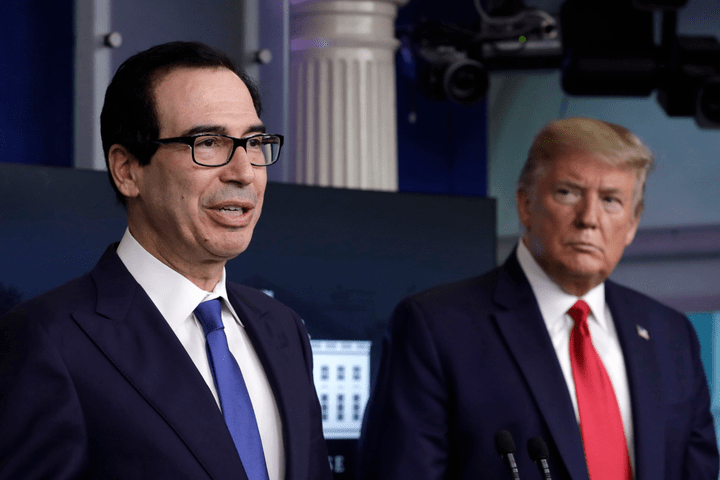 The Senate on Tuesday overwhelmingly approved a deal to increase funding for a popular small business loan program that ran out of money last week as businesses scrambled for a lifeline during the coronavirus pandemic.

The House is expected to pass the measure Thursday, giving members time to return to Washington to vote. President Donald Trump has vowed to sign it.

The bill provides an additional $484 billion in coronavirus relief, including $310 billion for the now-depleted Paycheck Protection Program, which was designed to provide forgivable loans to small businesses if they keep workers on the payroll during the economic shutdown caused by the pandemic.

The program exhausted its original $349 billion last week, but efforts to immediately replenish funding stalled as Democrats and Republicans argued over what else to include in an interim spending bill. An agreement was reached early Tuesday.

Republicans initially proposed simply adding an additional $250 billion to the program, and faulted Democrats for refusing to go along, allowing it to temporarily run out of money.

“In my view, it’s indefensible that Main Street’s small businesses and their workers had their assistance cut off for partisan leverage,” said Senate Majority Leader Mitch McConnell, R-Ky.

Democrats said that thanks to their efforts, the bill provides $220 billion in additional money for hospitals, testing and some of the neediest small businesses. They faulted Senate Republicans for initially refusing to negotiate over the measure.

“They tried to jam through the bill,” said Senate Minority Leader Charles E. Schumer, D-N.Y., adding that the final version is broader and better.

The measure sets aside $60 billion to be lent by smaller banking institutions, such as credit unions, in an attempt to increase the number of loans going to very small businesses or businesses without an existing relationship with a bank. Democrats made this set-aside a priority because many such businesses — including women- and minority-owned companies — complained they were shut out of the initial phase of funding.

“It seems that the large banks have tended to favor the preexisting relationships, particularly those that have existing loans with the banks. That is discriminatory,” said Rep. G.K. Butterfield, D-N.C. “We’re trying to fix that.”

The bill also includes $50 billion for a separate emergency loan program for small businesses that also is out of money; $75 billion for hospitals, including rural hospitals; and $25 billion to increase COVID-19 testing. Of the $25 billion for testing, $11 billion is to help states, cities, tribes and territories increase testing and contact-tracing capabilities, something experts have warned will be a necessary step in weighing when to reopen the economy.

The package also requires the Department of Health and Human Services to create and publish a national strategy for coronavirus testing, something that was a sticking point in the final hours of negotiations.

“We made sure, maybe most importantly, that there be adequate money for a national testing regime, and that this administration be required to report to us very shortly on what their plan is to have national testing,” Schumer said.

Within three weeks, the HHS secretary is required to issue a report on current levels of coronavirus testing, including data on race and ethnicity, and information on rates of cases and hospitalizations.

Within 30 days, the department is required to issue a report on a “strategic testing plan” that assists states, localities and tribes in understanding COVID-19 testing for “both active infection and prior exposure.” In that same time frame, states and localities that receive funding for testing are required to submit to the department their plans for COVID-19 testing, including the number of test kits needed each month, month-by-month estimates of capacity and a description of how they plan to use the funds.

Not included in the final version of the bill is $150 billion for state and local governments struggling with a drop in tax revenue. Democrats sought the money, but Republicans and the White House insisted that issue be addressed in future relief measures.

Sen. Rand Paul, R-Ky., spoke against the bill, warning the cost of shutting down the U.S. economy was too high.

“The virus bailouts have already cost over $2 trillion,” he said before the vote. “Our annual deficit this year will approach $4 trillion. We can’t continue on this course. No amount of bailout dollars will stimulate an economy that’s being strangled by quarantine.”

Minutes after the Senate passed the bill, Washington quickly pivoted toward what might be in the next major spending bill to address the coronavirus outbreak.

“Phase 4 most likely will be what we need,” said Treasury Secretary Steven T. Mnuchin, who has represented the White House in much of the negotiations so far. He suggested that the fourth major bill would be one of the last. “This is a lot of money going out.”

The next bill “could be a big investment,” Mnuchin said, though he declined to put a price tag on it. Since early March, Congress has approved nearly $3 trillion in assistance to businesses, workers, hospitals, state and local governments and researchers.

Amid reports that several large national companies received multimillion-dollar loans through the small-business loan program, Trump urged them to return the money. Mnuchin acknowledged that loopholes existed for large companies and said “we’re going to put up very clear guidance” to ensure the money is directed at small businesses that need it.

Mnuchin said more than 1 million companies with fewer than 10 workers have received loans in the PPP already. “The intent of this money was not for big public companies that have access to capital,” he said.