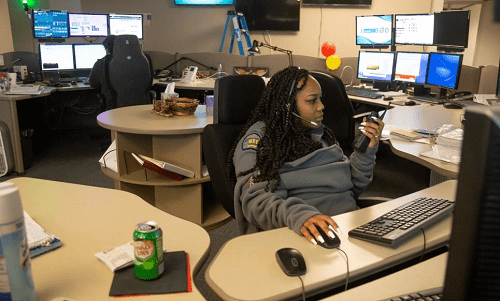 After a year of build-up, the first 17 hours of Sandy Springs’ new alarm law being active were fairly quiet.

The city is now, according to experts, the only one in Georgia whose police will not respond to home and business burglar alarms without video, audio or in-person verification that a crime is occurring at the expense of steep fines to alarm companies.

City spokeswoman Sharon Kraun said at 5 p.m. Wednesday, the first day of the new law, that there was only one unverified alarm call, and police didn’t respond.

“It was a much quieter day today … we didn’t have to dispatch for any burglar calls,” Kraun said. She attributed the decrease to alarm companies complying with the new law.

Sandy Springs Police Capt. Dan Nable said it’s impossible to know how many other calls did not come in because the alarm companies have already changed how they do business, eliminating any unverified alarms.

About 99% of the 8,000 alarm calls in Sandy Springs last year were false, Sandy Springs police Chief Ken DeSimone has said, and they accounted for 17% of all calls to the 911 dispatch center.

The city sent out mailers, hosted events, posted on social media, given updates at public meetings all to help get the word out over the last year.

“Most residents now got it,” Kraun said. But the city has no way of knowing that for sure because it is up to each owner of the city’s 14,080 registered alarms and the companies they pay to make sure both are in compliance with the new law.

Alarm company owners say they have struggled to get all customers in compliance.

Spartan Security Systems vice president Mike Richardson said his company provides alarm service for 15 to 20 customers in the city. He said Wednesday that about 25% still weren’t in compliance.

“I can only do so much,” he said. “I can’t make them read their emails or call me back.”

“It has been time-consuming to educate people that what the alarm company tells them … is wrong,” Nable said.

Nable said people are wrong to think officers roar with lights and sirens to a burglar alarm call. The department’s average response time is between 20 to 40 minutes, he said.

People find it odd to hear that police may not be showing up to a burglar alarm. But few other private industries promise as part of their business model the use of taxpayer-funded public services like police.

And though the law is active, the fight isn’t over. A coalition of alarm companies claim the new fines are unfair, saying they punish businesses for having customers who don’t know how to use their devices. The Security Industry Alarm Coalition’s lawsuit against the city is pending in the 11th District Court of Appeals.

“We are concerned for the safety of Sandy Springs taxpayers that have taken pro-active steps to protect lives and property and pay taxes for public safety,” said Stan Martin, head of the alarm group.