Safety app put to the test at University of Central Arkansas 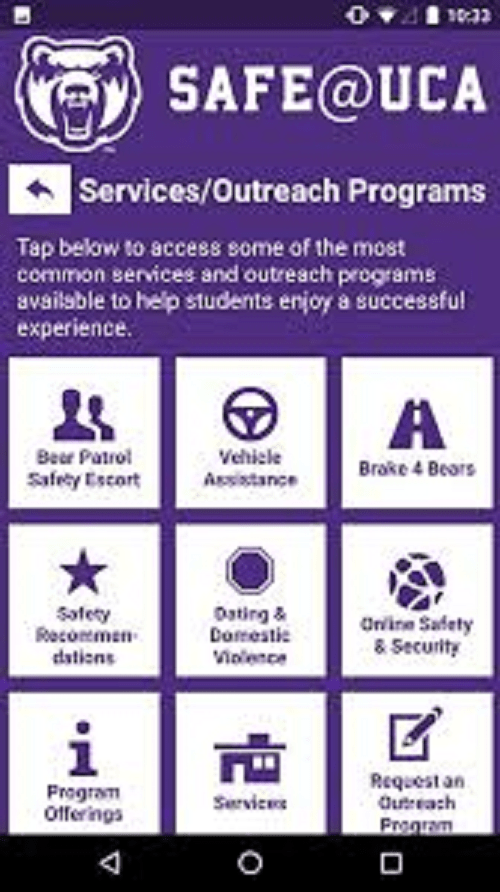 CONWAY — University of Central Arkansas students walking across campus late at night and sports fans trying to find parking spaces are among those who will benefit from a new safety app the university is offering to smartphone users.

UCA began offering the app, called Safe@UCA, at no charge to students, faculty and staff members, campus visitors, basically anyone, in October. Already, 844 subscribers had downloaded the app as of Nov. 15, and campus police hope that number will substantially increase as more people learn about it.

The university has more than 11,000 students.

Cpl. Michael Hopper said the UCA Police Department had been wanting to offer a safety app for a few years but hadn’t found one that met the school’s needs until it came across this one, offered by the AppArmor company.

“Safe@UCA is an integral part of our efforts to stay on the cutting-edge when it comes to connecting with and protecting our campus community — students, parents, faculty and staff, and visitors to campus. Users can quickly and easily do a handful of important things, like report a crime or Title IX tip, chat with or text UCAPD and access all of UCA’s emergency plans,” Merguie said.

One of the app’s features, Friend Walk, allows users to share their locations in real time with a friend to help ensure that they reach their destinations safely. The app also helps students contact the Bear Patrol Safety Escort, a program that connects a student-driven golf-cart service to anyone needing a ride on campus after dark.

Other app features include Mobile Blue Light, which lets users send their locations to campus police and talk in real-time with communications personnel. UCA also will use the app to send out safety alerts, although the university will continue to use phone and text notifications as well.

Hopper and Merguie believe the app will be especially helpful to visitors whose contact information the university may not have on file — parents, sports fans and high school students who attend band and football camps, for example.

When the university has to close some roads or revamp parking for special events, such as commencement, the Police Department can update the app to give users information on parking and traffic.

“For homecoming recently, we had [app] information on which parking lots would be closed and where people could park,” Hopper said.

The app can even help off-campus users who may encounter trouble. While the app includes a 911 feature, it also provides information on contacting the sheriff’s office, the local police or an ambulance service directly without going through 911.

“It’s reducing the amount of time [spent] to find that phone number,” Hopper said. “It cuts the middle man out.”

The app “streamlines our emergency communications and puts all of our safety and security information in one place,” UCA President Houston Davis said in the news release.

The app offers “a lot of resources,” Hopper said. “It’s sort of like a one-stop shop for anything you may need to know about the Police Department,” but it also offers information on counseling, reporting assaults, outreach programming, even buttons to summon help for dealing with a dead car battery or keys locked in a car.

Senior Sydney McEwen, 21, of Little Rock is on the executive board of the Bear Patrol organization and is one of its drivers. The golf carts always have two drivers and can seat up to four additional people.

McEwen is among those who have downloaded the app, though she’s not had to use it yet.

She’s glad students will be able to summon a Bear Patrol ride with the app’s help.

“I think we definitely see the most calls happening between” 9 p.m. and 1 a.m. or “when it’s cold outside,” she said.

The app can be downloaded from Apple’s app store and Google’s Play store.