Ring, the doorbell-camera firm, has partnered with 400 police forces … 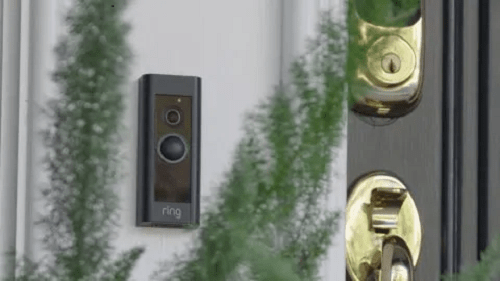 The doorbell-camera company Ring has forged video-sharing partnerships with more than 400 police forces across the United States, granting them potential access to homeowners’ camera footage and a powerful role in what the company calls the nation’s “new neighborhood watch.”

The partnerships let police request the video recorded by homeowners’ cameras within a specific time and area, helping officers see footage from the company’s millions of Internet-connected cameras installed nationwide, the company said. Officers don’t receive ongoing or live-video access, and homeowners can decline the requests, which Ring sends via email thanking them for “making your neighborhood a safer place.”

The number of police deals, which has not previously been reported, is likely to fuel broader questions about privacy, surveillance and the expanding reach of tech giants and local police. The rapid growth of the program, which began in spring 2018, surprised some civil liberties advocates, who thought that fewer than 300 agencies had signed on.

Ring officials and law enforcement partners portray the vast camera network as an irrepressible shield for neighborhoods, saying it can assist police investigators and protect homes from criminals, intruders and thieves.

“The mission has always been making the neighborhood safer,” said Eric Kuhn, the general manager of Neighbors, Ring’s crime-focused companion app. “We’ve had a lot of success in terms of deterring crime and solving crimes that would otherwise not be solved as quickly.”

But legal experts and privacy advocates have voiced alarm about the company’s eyes-everywhere ambitions and increasingly close relationship with police, saying the program could threaten civil liberties, turn residents into informants, and subject innocent people, including those who Ring users have flagged as “suspicious,” to greater surveillance and potential risk.

“If the police demanded every citizen put a camera at their door and give officers access to it, we might all recoil,” said Andrew Guthrie Ferguson, a law professor and author of “The Rise of Big Data Policing.”

By tapping into “a perceived need for more self-surveillance and by playing on consumer fears about crime and security,” he added, Ring has found “a clever workaround for the development of a wholly new surveillance network, without the kind of scrutiny that would happen if it was coming from the police or government.”

A map of Ring’s more than 400 police partnerships. (Courtesy of Ring)

Begun in 2013 as a line of Internet-connected “smart doorbells,” Ring has grown into one of the nation’s biggest household names in home security. The company, based in Santa Monica, Calif., sells a line of alarm systems, floodlight cameras and motion-detecting doorbell cameras starting at $99, as well as monthly “Ring Protect” subscriptions that allow homeowners to save the videos or have their systems professionally monitored around the clock.

Ring users are alerted when the doorbell chimes or the camera senses motion, and they can view their camera’s live feed from afar using a mobile app. Users also have the option of sharing footage to Ring’s public social network, Neighbors, which allows people to report local crimes, discuss suspicious events and share videos from their Ring cameras, cellphones and other devices.

The Neighbors feed operates like an endless stream of local suspicion, combining official police reports compiled by Neighbors’ “News Team” with what Ring calls “hyperlocal” posts from nearby homeowners reporting stolen packages, mysterious noises, questionable visitors and missing cats. About a third of Neighbors posts are for “suspicious activity” or “unknown visitors,” the company said. (About a quarter of posts are crime-related; a fifth are for lost pets.)

Users, which the company calls “neighbors,” are anonymous on the app, but the public video does not obscure faces or voices from anyone caught on camera. Participating police officers can chat directly with users on the Neighbors feed and get alerts when a homeowner posts a message from inside their watched jurisdiction. The Neighbors app also alerts users when a new police force partners up, saying, “Your Ring Neighborhood just got a whole lot stronger.”

Don’t be a creep with your Ring doorbell or Nest security camera. Follow these steps.
Doorbells are gaining cameras for security and catching porch pirates. The Post’s Geoff Fowler goes over security camera etiquette you may not have considered. (Jhaan Elker, Geoffrey Fowler/The Washington Post)

To seek out Ring video that has not been publicly shared, officers can use a special “Neighbors Portal” map interface to designate a time range and local area, up to half a square mile wide, and get Ring to send an automated email to all users within that range, alongside a case number and message from police.

The user can click to share their Ring videos, review them before sharing, decline or, at the bottom of the email, unsubscribe from future footage-sharing requests. “If you would like to take direct action to make your neighborhood safer, this is a great opportunity,” an email supplied by Ring states.

Ring says police officers don’t have access to live video feeds and aren’t told which homes use Ring cameras or how homeowners responded unless the users consent. Officers could previously access a “heat map” showing the general density of where Ring devices were in use, but the company said it has removed that feature from the video request because it was deemed “no longer useful.”

Ring said it would not provide user video footage in response to a subpoena but would comply if company officials were presented with a search warrant or thought they had a legal obligation to produce the content. “Ring does not disclose customer information in response to government demands unless we’re required to do so to comply with a legally valid and binding order,” the company said in a statement.

Ring users consent to the company giving recorded video to “law enforcement authorities, government officials and/or third parties” if the company thinks it’s necessary to comply with “legal process or reasonable government request,” its terms of service state. The company says it can also store footage deleted by the user to comply with legal obligations.

The high-resolution cameras can provide detailed images of not just a front doorstep but also neighboring homes across the street and down the block. Ring users have further expanded their home monitoring by installing the motion-detecting cameras along driveways, decks and rooftops.

Some officers said they now look for Ring doorbells, notable for their glowing circular buttons, when investigating crimes or canvassing neighborhoods, in case they need to pursue legal maneuvers later to obtain the video.

Ring users have shared videos of package thieves, burglars and vandals in the hope of naming and shaming and apprehending the perpetrators, but they’ve also done so for people — possibly salespeople, petitioners or strangers in need of help — who knock on the door and leave without incident. (Other recorded visitors include lizards, deer, mantises, snakesand snooping raccoons.)

Ring users’ ability to report people as suspicious has been criticized for its potential to contribute to racial profiling and heightened community distrust. Last Halloween in southern Maryland, a Ring user living near a middle school posted a video of two boys ringing their doorbell with the title: “Early trick or treat, or are they up to no good?”

The video, which has been viewed in the Neighbors app more than 5,700 times, inspired a rash of comments: Some questioned the children’s motives, while others said they looked like harmless kids. “Those cuties? You’re joking, right?” one commenter said. After The Post shared this video with Ring, the company removed it, saying it no longer fits the service’s community guidelines because “there is no objective reason stated that would put their behavior in question.”