In partnership with Fluke Networks, in late 2018 we at Cabling Installation & Maintenance collected salary and wage information from cabling professionals employed in the information and communications technology (ICT) industry in the United States. The first-of-its-kind comprehensive compensation study reveals trends in total compensation across characteristics that include geographic regions, industry experience, working environments, technical expertise, education levels, and professional certifications. This article will summarize and detail some of the surveyresults.

We collected data via an online survey. Invitations to participate in the survey were sent and data was collected during the months of November and December 2018. The survey reached professionals inside and outside the United States, but we collected information only from individuals working in the U.S. We obtained a total of 1,206 usable responses; those responses are the basis for the data in this article.

Among the questions we asked respondents was their primary job function; options included general management, designer, engineer, project manager, technician, lead technician, and other. We also asked participants’ age and number of years they have been working in the industry. Other questions included education level (from less than a high school diploma to a graduate-level college degree) and membership in a labor union or guild. Additionally, we asked participants to self-identify their respective levels of expertise in the technology areas of outside plant, security, data center installations, the Internet of Things, fiber optics, and wireless systems including WiFi, DAS and small cells. We also asked them to identify, from a pick-list, which professional credentials they hold. And of course, we asked them to identify their compensation—including whether they are paid by annual salary or hourly wage, and how much if any compensation they received in the form of a bonus over the previous 12 months.

For example, because we collected information only from individuals employed in the U.S., we were able to compare the average salaries in different regions of the country. The illustrative map in this article indicates the regions where overall compensation exceeds the average, and where it trails the average. When we compiled this data, we allowed four states—California, Florida, New York, and Texas—to stand on their own because we had a sufficient number of participants from each of these states for the statistics from each to be valid. In three of those states, workers’ compensation outpaced the national average (California, +13 percent; New York, +4 percent; and Texas, +1 percent), while in Florida, compensation was 12 percent below the national average.

Aside from those three states, the Northeast (excluding New York) was the only region of the country where compensation was higher than the national average. And it was much higher: 14 percent. The Midwest at -5 percent, South (exclusive of Texas and Florida) at -8 percent, and West (exclusive of California) at -1 percent, all trailed the overall national average.

We asked survey respondents to identify their own levels of expertise with the following technology or infrastructure-system types: wireless (including WiFi, DAS and small cells), fiber optics, data center installations, security, the Internet of Things, and outside plant systems. Respondents had the following levels to choose from: none, some, medium, high, very high. When compiling data, we organized those who characterized themselves as having a high or very high level of expertise in each. In every case, workers who identified themselves as having a high or very high level of expertise earned more than those without such expertise. Below are the specific results, with the technology type followed by the total number of respondents who claim high or very high expertise levels, then the percentage by which these individuals’ compensation is higher than the average. Please note that these numbers incorporate job-type-for-job-type comparisons. In other words, the number is an overall reflection of how much workers of each job type (engineer, technician, general management, etc.) with such expertise earn compared to workers of the same job type who do not have as high a level of expertise.

A disclaimer probably is in order. We did not define “Internet of Things” for our survey respondents, allowing each individual to decide for themselves what that often-used-but-never-really-defined term means, as well as what it means to have specific expertise in it. Among the technology areas we asked about, IoT yielded the fewest respondents claiming expertise in it, at 262. 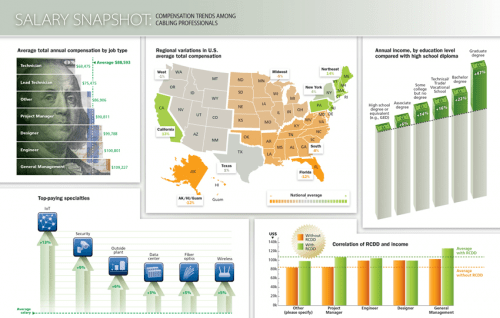 Concerning workers’ membership in a labor union or workers’ guild, we asked straightforwardly, “Are you a member of a labor union/workers’ guild?” Those responding in the negative chose from two responses: “No, there is no union/guild I can join at my current company,” or “No, but there is a union/guild I could join.” Among lead technicians, 61 are union members, with an average income of $85,168; 215 are not union members, with an average income of $72,725. Of the 215 non-union members, only 19 indicated that union membership is an option for them. No other job type included a significant enough number of union workers to produce reliable comparison data.

Survey respondents were asked which professional credentials they hold. They could choose from a list of approximately 20 credentials in the cabling and networking trades, and also had the opportunity to name a credential not listed. The Registered Communications Distribution Designer (RCDD) credential from BICSI showed up often enough among respondents (217 times) that it was the one credential around which data could be analyzed. Specifically, we looked at designers, engineers, general managers, project managers, and those indicating other job types. Not enough technicians or lead technicians hold the RCDD credential to make valid comparisons.

When we examined professionals’ compensation in the context of education level, we used the high school diploma or its equivalent as a baseline. From there we calculated the percentage above or below that baseline at which other education levels are compensated. The results follow.

Among our aspirations for this study was to collect and analyze information about compensation differences between the genders. We received completed surveys from 45 women, which did not provide us with sufficient data to conduct statistically significant analysis. Perhaps that number itself—45 of 1,206 survey respondents were women—tells enough of a story that no further analysis is necessary at this time. However, we maintain our aspirations to obtain and analyze compensation differences between men and women.

We at Cabling Installation & Maintenance and Fluke Networks plan to implement this compensation study again in 2019, producing results in early 2020. Doing so will allow us not only to examine year-to-year differences, but also ideally to attract wider participation, enabling us to examine some data points that we were unable to examine this year because of low participation levels.

We thank all 1,206 participants who provided usable responses to our survey. And we invite every industry professional to stay tuned. We’ll present more-detailed information from this survey over the next several weeks, and we look forward to greater participation in our 2019 compensation study.

Patrick McLaughlin is our chief editor. Jared Saunders is a research analyst with PennWell, the parent company of Cabling Installation & Maintenance. Saunders provides market analysis on a number of technology fields, including LED lighting. He analyzed and provided insight into the results of our inaugural compensation study.