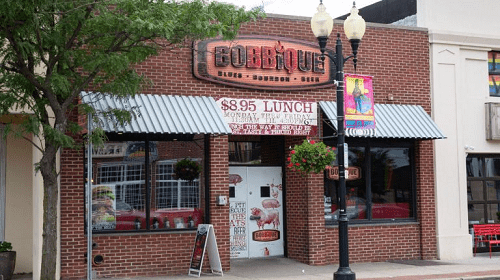 A Patchogue business has filed a federal lawsuit against Suffolk County over its fees for false alarms, claiming they are unconstitutional and excessive.

The operator of Bobbique, a BBQ restaurant on Main Street, sued the county last Tuesday, seeking class action status on behalf of all people who have been charged county false alarm fees. The lawsuit seeks to strike down the fees and to collect $40 million in damages.

“It’s really taxing the citizens’ rights to be safe in their homes,” said Brian Egan, one of the plaintiff’s attorneys.

The county began charging false alarm fees of up to $500 in 2016 after a new law — based on a similar Nassau County version from 1991 — required those with security systems to register them annually for a fee and created a sliding scale of false alarm fees. Suffolk legislators later amended the law to reduce the rate of fee increases for repeat offenders.

Officials said the law reduced the number of false alarm calls that police responded to each year by roughly half, from 89,724 in 2015 to 47,375 last year. The alarm program, including registration fees, produced about $9 million in revenue in that time span.

Suffolk Police Chief Stuart Cameron said before the law, one of every six 911 calls was about false alarms. Reducing those calls has improved police response times because calls are less likely to be false alarms.

“The objective here is not to make money,” Cameron said. “It’s to reduce false alarms so we can take our finite and valuable police resources and do something more important, like combating gangs and drugs and improving traffic safety.”

In a lawsuit filed in U.S. Eastern District Court, Bobbique operator Bens BBQ said the county sought $1,410 in payment in July 2018 for four false alarms triggered in 2016 from nearby construction. Bens BBQ appealed the claim in a written letter to the police commissioner.  Bens BBQ said it never received a decision on the appeal, yet the county sued for payment in small claims court this year and won an award of $1,710.

Attorneys for Bens BBQ said fee defendants should be accorded the same due process as those in the criminal justice system because they are fined like criminal violations.

“In what situation do you ever get a ticket from a police officer and your only chance to plead not guilty or to contest it is to write a letter to the police commissioner?” said Christopher Bianco, another attorney for the plaintiff.

The lawsuit also alleges there is no criteria for determining a false alarm. It said fees exceed the county’s cost of responding to false alarms and are used solely for generating revenue.

The county is also facing a lawsuit about $70 million in fee hikes for real estate transactions.

Legis. Tom Cilmi, the Republican minority leader, said that while police should not have to respond to repeated false alarms, the current program is “ill-conceived.”

“This program has been government-sanctioned extortion right from the start,” Cilmi said.

Risa Hartmann, a North Babylon resident, said she would be interested in joining the alarm lawsuit if it is certified as class action. Hartmann, 49, said the county sued her in small claims court this year for $500 in fees for false alarms in 2017 without earlier notifying her of the fees. The single mother of two, whose home is in foreclosure, said the county has threatened to garnish her child support payments.

“I hope they can shut this law down,” Hartmann said. “I just feel it’s very unfair we have to pay for us to feel safe in our own homes.”

A Patchogue, Long Island, restaurant wants a judge to allow other people to join them in a federal lawsuit that claims the fees Suffolk County charges for security system false alarms are excessive and unconstitutional.

The restaurant is named Bobbique.

Its operator alleges that Suffolk County issued $1,400 in fines because of four false alarms triggered by construction work.

The county then sued the restaurant in small claims court for the unpaid fees.

The operator wants the federal case to be considered a class action lawsuit to allow other residents and businesses to help challenge the county.

County Legislature Minority Leader Tom Cilmi applauds the restaurant for standing up to a program that’s designed to generate revenue for the county.

“It impacts our residents, and it impacts our commercial businesses because it really – especially the registration fee – it is simply another tax on public safety.”