Panic buttons for mass shootings go on sale in the US 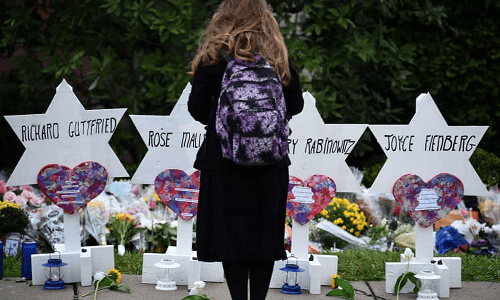 The Israeli startup, Gabriel, said it aims to sell the sensors – which call the police when pressed but also have inbuilt cameras and microphones – to public venues such as schools and places of worship.

The firm believes it can reduce the high death tolls from mass shootings, such as the recent attack on two mosques in New Zealand that killed 50 people during prayers. So far, it has focused on the US, where schools have been targeted.

“One hundred years ago, people died in the panic during fires,” said Gabriel’s founder, Yoni Sherizen. “We’ve been successful at educating a generation on how to deal with fires. Unfortunately, the challenges that our children today have to deal with are things like active shooter situations and terror attacks.”

Americans suffer from mass shootings at more than 11 times the rate of any other developed country, according to a 2014 study. The Gun Violence Archive, a US not-for-profit, says there is a mass shooting – defined as four or more people shot in one incident, not including the shooter – nine out of every 10 days on average.

Advocacy groups say gun deaths and injuries could be reduced by the introduction of gun control measures. Sherizen argued that number could drop if emergency services and civilians were better prepared and equipped.

He developed the product after finding himself near an attack by two gunmen in June 2016 at a Tel Aviv mall. “There was an enormous amount of chaos both during the attack and immediately afterwards,” he said. “An off-duty police officer even accidentally sheltered one of the attackers and brought him home, thinking he was a civilian.”

A “cousin of the fire alarm”, the wireless sensor is intentionally designed to look like a traditional alarm so people know how to use it, by slamming their hand on the button. But the company has also developed a command and control dashboard for emergency teams and a smartphone application that can also be used as an alert system.

Pilot programmes in Detroit had passed initial tests and the Jewish Federation of Metropolitan Detroit are installing the product at 25 locations. Concerns over a possible increase in antisemitic and hate crimes rose after a shooter killed 11 people in October at a Pittsburgh synagogue, the deadliest attack on US Jews in modern history.

Rather than implementing significant gun control measures that have reduced deaths in other countries, the US has developed a flourishing security industry, including bulletproof backpacks for school children, in the wake of mass shootings.

The market for security equipment and services in the education sector reached $2.7bn in 2017, according to IHS Markit. However, it said, despite advances in the level of security, the number of mass shootings at US schools has remained relatively constant during the past 30 years.

Dewey Cornell, a school safety expert at the University of Virginia, said he was skeptical of companies that “sell products of dubious value”.

He added: “Multiple studies have found that technical security measures do not make schools safer and only increase student perceptions that schools are dangerous places. The cost of this equipment deprives schools of funds they need for more effective efforts such as counselling services for troubled students.”

When asked about his views on gun laws, Sherizen said: “We are focused on saving lives by providing better tools for the public and their first responders. Not by trying to shift the political landscape on gun control.”

The company’s advisory board includes several former senior figures in Israeli intelligence and police, as well as Ryan Petty, an American expert on security devices. After joining the board, Petty lost his 14-year-old daughter during the mass shooting in Parkland, Florida. “It has become personal,” said Sherizen.

Sherizen, a dual Israeli-US citizen, said he hoped his sensor would instead give people confidence to deal with and respond to these events, to reduce chaos, panic and therefore deaths.

“A very high percentage of young people today [in the US] identify as the ‘active shooter generation’,” he said. “I believe there is some sort of social illness that needs to be dealt with.”