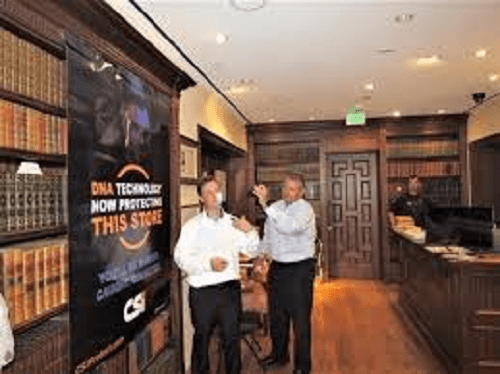 A new chapter in theft prevention is being written at Raptis Rare Books on Worth Avenue, a shop that specializes in first editions and signed books — and is home to a 1632 Second Folio collection of the plays of William Shakespeare.

Shop owner Matthew Raptis unveiled a high-tech security system recently that has a decidedly sci-fi flavor. It’s an advanced forensic marking spray that coats crooks with a synthetic DNA-like material that police can use later to identify perpetrators and help them build a case.

The technology was designed by a company called SelectaDNA and is marketed in the United States by CSI Protect, which is introducing it here after it was used in 33 countries, including the United Kingdom. Raptis Rare Books is the first business in Florida to install the system, according to CSI Protect.

“We have had thefts,” Raptis said at a Worth Avenue media event to discuss the new system, although he declined to elaborate. “There’s a reason why we’re doing this.”

Of course, Raptis already had security, including a network of cameras. “This is another level of protection for us.”

It works like this: A device hidden in a store releases a mist on a suspected thief, which can be activated by a panic button or a burglar alarm. The spray contains a specially engineered DNA-like material unique to the property. It’s invisible except under an ultraviolet light and stays on the skin for four to six weeks and on clothing for up to three months.

Like any other criminal investigation, police have to track down the suspect. But once that’s done, it’s easier to tie the suspect to the particular theft.

Ted Gonzales, executive director of the Palm Beach County Association of Chiefs of Police, and a former police chief for the Town of Jupiter Island, said the DNA spray is the next step up from a microchip program his department had in use on the island.

In that case, microchips were used by residents to identify their property after it was recovered by police. “There were a couple of identification cases that successfully went through the court system,” he said.

The synthetic DNA evidence that CSI Protect uses has not been tested yet in U.S. courts, said Joe Maltese, vice president of marketing and operations. But it has been used successfully for years in the U.K., where the idea originated, he said.

The company also sells DNA grease, which is coated on metals such as pipes and wires. Maltese said CSI Protect recently signed a contract with the Los Angeles County Metropolitan Transportation Authority, where thieves have been stealing cables for their scrap metal value.

“This product really acts a lot like an alarm system,” Seymour said. “It’s a way to deter crime, or once the crime has occurred, it lets us tie the perpetrator to the crime. This is just another tool that puts a unique piece of evidence on the perpetrator and will allow more convictions.”

Signs in the Raptis shop warn: “DNA criminal tagging system in use to prevent theft.”

But Raptis shrugged off a question about that. “The cost is arbitrary when it comes to saving these special treasures,” he said.