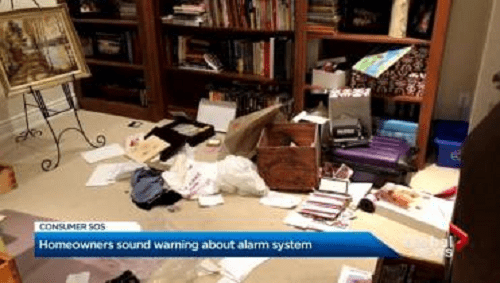 As Sean O’Shea reports, the couple had been customers of AlarmForce for 11 years, but say they were told by technicians the system wasn’t installed correctly. … But when burglars broke into the home of Paul and Trina Farr north of Newmarket, Ont., back in May, the alarm didn’t work.

They heard the radio jingle and believed the advertising promise: if thieves broke into an AlarmForce-protected home, they wouldn’t stay long because a live voice would come through the speaker to warn that police were on their way.

But when burglars broke into the home of Paul and Trina Farr north of Newmarket, Ont., back in May, the alarm didn’t work.

Thieves settled in and may have spent several hours inside, scouring and then stealing almost everything of value — much of which was contained in a locked, three-foot-tall safe.

“The one day we needed it, it (the alarm) didn’t work,” Paul told Global News in an interview.

When Paul returned to the rural acreage after work, he says one of the garage doors was wide open. So was the door to the laundry room.

Once inside the kitchen, he could see that something was clearly wrong.

“I saw the carnage. The front door was broken,” he said.

Someone had smashed through the entranceway. Paul says he immediately started walking to the den, increasingly concerned about what he would find next.

“I rushed to find the safe. Then my heart sank. Our whole world was in there,” he said, pointing to the spot in the closet where the three-foot-tall, fire-resistant safe had been securely bolted to the floor.

The safe was gone.

It contained almost everything of value to the couple: his wife’s wedding ring, jewelry, cash, passports, identity documents and items of sentimental value, including two handwritten cards from his wife’s grandmother, who is deceased.

“You can’t replace that stuff,” Paul said, choking back emotions.

Between the contents of the safe and other stolen items, Paul’s lawyer said the couple has sustained a loss of about $250,000.

Police told the couple the break-in may have been orchestrated by members of organized crime targeting homes in the sparsely populated area.

Insurance has covered many but not all of the costs of the break-in and the resulting losses.

The couple is asking AlarmForce, owned by Bell Canada, to pay damages because the home alarm system didn’t function on the day of the break-in.

After the incident, the Farrs say a Bell technician came to the house and acknowledged that door sensors had not been properly installed and likely would not work. He replaced the sensors and left, they said.

The Farrs have been AlarmForce customers for more than 11 years, dating back to their previous home. They say the system had been tested by the company on more than one occasion and appeared to work.

The couple says they set the alarm each time they leave the home and insist they did so on the day of the break-in.

Bell Canada, when contacted by Global News, said it is looking into what happened.

“We are investigating the claim. We expect to respond with the results of our investigation soon,” said Nathan Gibson, a Bell spokesperson.

In a letter to Bell, the Farrs’ lawyer put the blame for the heavy losses on AlarmForce, claiming the company was negligent.

“Had the sensors deployed, the thieves would not have had time to remove the safe from the floor,” Alexi Wood wrote in an email to the company.

Since the break-in, Paul says he has trouble trusting people.

He and his wife have spent tens of thousands of dollars on new security cameras and have installed a different alarm system for the home.

They also recently installed a sliding security gate at the foot of the long, tree-lined driveway to their home.

“It’s expensive,” Paul said, explaining the couple considered moving away but decided to stay in their home and instead beef up security to deter another break-in.

He says he knew a break-in was possible even with an alarm system, but Paul counted on AlarmForce to make sure a thief wouldn’t stay long enough to get away with the items that counted most — the ones stored in the heavy, steel safe.

Had the alarm sounded that day, he says he’s certain the thieves wouldn’t have had time to escape with the safe.