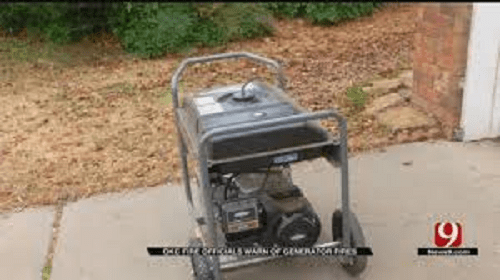 OG&E is asking people to do their part in protecting its crews working in the winter weather.

Some situations could become deadly for your neighbors, and electrical workers if you aren’t careful.
Portable generators have been flying off store shelves in preparation for winter weather. But if people aren’t careful with these heat sources, their mistakes could be deadly.
There are many things to consider when using a portable generator, but two things in particular could be deadly. Those are carbon monoxide poisoning from the engine exhaust and electrocution from connecting the generator to your home electrical wiring system.
“Don’t try to plug your generator into a wall socket. Don’t try to backfeed it. That puts your neighbors electrical workers at risk. It can also start a fire in your home,” said Oklahoma City Fire Department Captain, David Macy.
You should always set up your portable generator outdoors, at least five feet away from windows, doors and vents. This will protect you from deadly fumes.
“If you’re going to be operating a generator near the home, then it’s good to purchase and install a carbon monoxide detector,” said Macy.
Keep the surface it’s on dry and try to operate under a canopy like structure. Always store fuel outside and turn off the generator before refueling.
Fire officials also want to remind everyone to check their smoke alarms.
“If you don’t have a smoke alarm, call us. We’ll get somebody out today to get one of those installed,” said Macy.
Experts say it’s important to make sure the flue is open and that the screen operates properly.