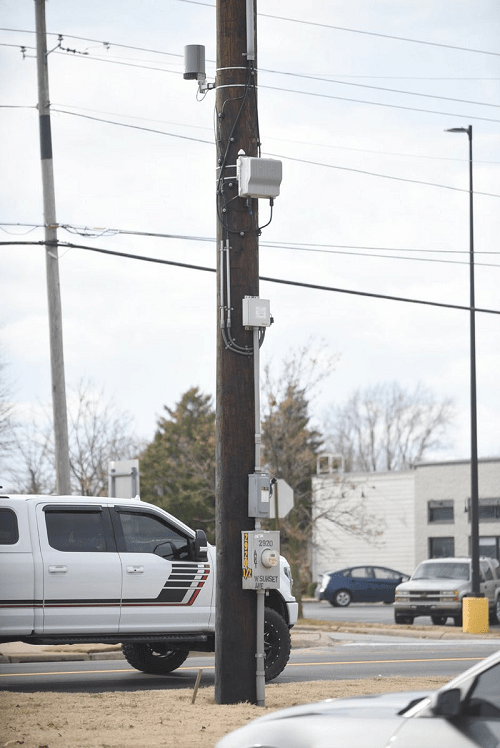 An Uber driver connecting with a ride. A college student checking his bank balance. A worried mother wondering why her teen is out past curfew. A driver left hanging in an overturned car.

Northwest Arkansas cities, the state Legislature and the federal government have taken steps to bring the latest cellphone technology — 5G — to residents, yet keep its placement under control.

The 5G — or fifth generation — cellphone technology uses many small areas of coverage. It looks like a box, usually attached to a pole, with an electrical box.

It’s associated with network speeds of 1 billion bits per second or more, according to information on the National League of Cities website.

The 5G technology focuses on connectivity, speed and capacity for data transfer to increase the capabilities of personal cellular devices.

“We can enable a lot of quality of life with this technology,” said State Rep. Andy Davis of Little Rock, one of the legislators who sponsored the bill for the regulations.

The Legislature passed Act 999 during its session this year. The act sets out requirements when telecommunications companies wish to place small cell facilities in cities. The state law follows the lead of the federal telecommunications act, which makes sure cities allow technology.

“The big advantage of 5G is not better coverage, but higher capacity,” Davis said.

Devices increasingly are used to stream videos and live feeds rather than talking or downloading email, which require the least data capacity, he said.

Smith told the story of dropped calls in front of The Jones Center on Old Missouri Road in Springdale.

“I would drop a call there. I mean every time,” he said. “But they put a pole on the north side of the E-Z Mart on Emma Avenue, and I haven’t dropped a call since.”

“They are low-power, lightweight, compact, scalable and unobtrusive,” said Dale Ingram of small cell equipment. Ingram is an AT&T spokesman in Oklahoma City.

The small cells provide increased capacity in areas with heavy cellular use, areas in “gaps” between macro coverage and in areas where topography or structures block cell signals, according to the material.

A map on the city’s website shows a high concentration along Dickson Street.

“We get the largest amount of foot traffic on Dickson Street,” Curth said. “The university students are watching shows, recording video, talking to their friends.”

“They needed this piece to be able to roll out 5G in Arkansas,” he said. “We want to take advantage of any new technology. For our rural areas, we hope this will lead to more broadband expansion.”

Davis wants to see Arkansas as one of the first states to provide 5G service.

“If the small cells technology is in place, then companies like AT&T and Verizon will look to us first to invest their dollars.”

“This year’s statute has hamstrung the city’s ability to decide where to put cells if they want to consider aesthetics and nature,” Curth said.

Fayetteville in 2017 passed a small cell ordinance for permitting the sites.

Curth said residents and city officials worked on the regulations for the equipment because they wanted to ensure management of the city’s right of way and aesthetics remained in the city’s purview.

Fayetteville allowed small cell facilities only in the city’s right of way, but the state expanded installation to easements owned by utilities and residents.

“Most subdivisions have easements everywhere,” Curth said. “State law says the small cell facilities can be 50 feet tall and placed anywhere. And they can be placed 18 inches apart on sidewalks, ruining the streetscape.”

The state law allows cities to place restrictions in historic districts or other areas with specific zoning requirements.

Most small cell facilities in Springdale appear as a box and meter on a post at busy intersections, said Brad Baldwin, the city’s director of engineering and public works.

“I’m not fluffy, and I think they’re fine,” Baldwin said. “It’s a pole put up in a right of way. It happens all the time. They’re a good thing because their installation means we will be getting 5G, more bandwidth.”

Springdale restricts the equipment placement, Smith said. City officials don’t want the increased cell signal to interfere with the city’s traffic signals. Nor do they want the pole to block the view of a driver or cause a blind spot.

Smith said installing the equipment on existing poles is best. But pushing the site of future poles back into the easements along the streets makes sense in Springdale.

Bentonville officials are working to update regulations passed in 2018 to align with the new law, said Travis Matlock, the city’s engineering director.

The city rules ask telecommunications companies to install small cell facilities on their own poles, even if that means putting up a new one. “We just want to keep the poles as clean as possible, without any extras,” Matlock said

“If it increases data for everyone, then more power to them,” he said.

“Some are under construction. Some are in design. I don’t know if any have actually kicked off yet.”

Springdale requires a $100 fee with an application for a small cell facility permit, as well as $250 if the facility will be on an existing city pole.

In addition, the city annually charges $30 for use of the right of way and $240 for the use of a city pole.

If a company decides to install the equipment on a pole owned by a utility company, the company must present to the city the fees and a letter of agreement for the pole’s use.

The ordinance limits the height of a small cell facility to 50 feet or not more than 10% higher than any structures within 30 feet.

“We’ve known this was coming for some time,” said Ernest Cate, Springdale city attorney, who wrote the ordinance with help from telecommunications employees. “We wanted to do it right and be uniform across the state.”

Cate said the city followed the state’s lead to set its rules and regulations.