‘No masks, no service:’ Arkansas businesses decide own policy after statewide order lifted

Arkansas Gov. Asa Hutchinson announced on Tuesday that he has lifted the state’s mask mandate after reaching goals put in place on Feb. 26.

Arkansas’ mask mandate was set to end March 31 only if the seven-day rolling average of positive COVID-19 tests remained below 10 percent with an average of 7,500 people being tested daily. Average daily tests have dropped off in the state, so the governor considered statewide coronavirus hospitalizations, which needed to be below 750.

“By the criteria that we set, it’s an appropriate time to lift the statewide mask mandate,” Hutchinson said in a news conference.

The Republican governor said that state employees will continue to be required to wear masks in government buildings. Other places including restaurants, hotels, salons and barbershops, stores, event venues, schools, state prisons and hospitals, and healthcare providers are also able to make their own decisions on mask requirements.

“I’ve talked to a number of restaurants that will continue with requiring masks within their restaurant for the safety of their employees, for their patrons that come there,” Hutchinson said. “And they want to have the highest level of safety until more people get vaccinated. Some others will choose something different. They have the flexibility. But there’ll be many that will continue to require a mask while they’re not eating.”

For places like Trio’s Restaurant in Little Rock, owner Capi Peck said the mask requirement will continue for patrons and employees. She also serves as the Ward 4 City Director.

“Kind of like, ‘no shoes, no shirt, no service,'” Peck said. “Well — no masks, no service. We have very clear signage on our tables and on our doors about social distancing and when to wear a mask and when not.” 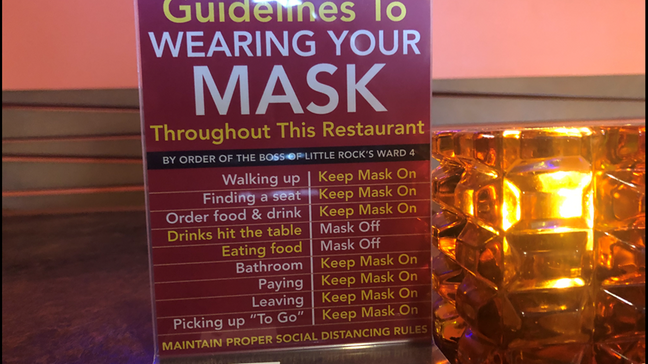 For the majority of the pandemic, the restaurant remained takeout only. The restaurant reopened at 25 percent capacity in mid-November and just recently expanded capacity to 50%.

“I’ve been in business for 34-and-a-half years,” Peck said. “I think people respect me and the decisions that my partner and I have made.”

Peck said she’s spoken with medical experts, followed CDC recommendations, monitored local and nearby case numbers, and has done her own research to make her decision.

“We’re going to stay the course,” she said. “I think that my staff appreciates it, my customers appreciate it and I feel like it’s the right and the safe thing to do. It’s not much of an inconvenience. This won’t go on forever, but I expect that to go on for a few more months, to be honest.”

Peck is not the only one continuing to require masks. Walmart, the state’s biggest employer, said it will continue requiring employees and customers to wear masks.

“We are constantly evaluating our COVID-related health and safety protocols, including state executive orders and other mandate changes,” a company spokesperson said in a statement. “We will continue to do so, keeping CDC guidance and local COVID statistics in mind.”

The governor originally stated there would be no local citywide mask mandates once the state’s ended, but Tuesday he backtracked.

“They can consider it,” Hutchinson said. “I would be doubtful that very many cities will, but that is there right under our Constitution, and under the fact that we don’t have a statewide mandate in place anymore, does leave them that discretion.”

In a statement requested by KATV on why he changed his decision, Hutchinson said:

“The cities have authority to make its own decision on whether to have a local mask requirement. There is no state prohibition on their action. The change is based upon my desire to eliminate state mandates. One of those freedoms is local control of the mask issue.”

Little Rock, North Little Rock and Fayetteville are among the cities that announced some kind of mask requirement will remain in place.

Little Rock Mayor Frank Scott Jr. said during a Board of Directors meeting Tuesday that the city’s COVID-19 task force will evaluate the mask policy every 30 days and decide whether it needs to continue. Scott said that those who don’t comply with the mask order can be fined, but he hopes engage and educate community members before taking punitive measures.

Hutchinson, along with state Secretary of Health Dr. Jose Romero, also reiterated that even though the statewide mandate has lifted, Arkansans should continue to wear masks.

“It’s important to be courteous to others and to be mindful that we need to protect ourselves and others,” Hutchinson said. “And so common sense should govern.”

“I don’t think anybody was surprised,” she said. “I think it was predictable, but I’m afraid the message is that [the pandemic] is over.”

Peck also fears that with the mandate lifted, enforcement may be difficult.

“I think people will hear the message from the governor and think that that’s acceptable,” she said.

But Peck said she’s received support from her customers and plans to keep the mask requirement in place until herd immunity is reached.

“Be safe everybody,” she said. “It’s been a long year but we’re getting closer and closer. Take it seriously and wear your mask.”