More than 2,100 U.S. cities brace for budget shortfalls due to coronavirus, with many planning cuts and layoffs, new survey finds 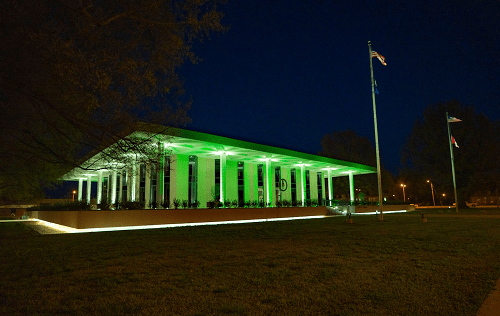 The city hall in Paducah, Kentucky is illuminated by green lights in memory of the lives lost to coronavirus in Kentucky as the COVID-19 pandemic continues. (Thomas Dean Stewart/The Paducah Sun via AP)

The findings come from an inquiry conducted by the National League of Cities and the U.S. Conference of Mayors. The survey results arrive as the White House and state officials continue to battle over how to contain the pandemic’s economic fallout.

The bleak outlook — shared by local governments representing roughly 93 million people nationwide — led some top mayors and other leaders to call for greater federal aid to protect cities now forced to choose between balancing their cash-strapped ledgers and sustaining the public services that residents need most.

“There’s no question that the coronavirus pandemic has had, and will have, a major impact on cities of all sizes,” said Clarence Anthony, the executive director of the National League of Cities.

The NLC joined with the U.S. Conference of Mayors to conduct the early inquiry into the economic effects of the novel coronavirus, finding many local governments are bracing for sharp declines in tax revenue as businesses shutter, workers lose their jobs in record numbers and tourism grinds to a halt.
Nearly 9 in 10 cities surveyed — from smaller hubs with populations of fewer than 50,000 to the largest metropolitan areas in the country — signaled they expect a revenue shortfall. Among them, more than 1,100 cities are preparing to scale back public services, the survey found. Almost 600 cities predicted they may have to lay off some government workers amid the crunch. Local leaders in 1,000 cities said the reductions probably would affect their local police departments and other public safety agencies.

The findings inject new urgency into a simmering congressional debate over Washington’s role in safeguarding cash-starved cities and states from financial ruin. Local governments generally cannot run deficits, unlike the nation’s capital, leaving them no choice but to slash spending or raise taxes — absent more federal support. On Monday, President Trump signaled more federal aid isn’t out of the question, saying he is “certainly willing to look at that.”

In the meantime, city officials have pointed to major financial struggles on their horizon. San Francisco leaders anticipate a budget shortfall as high as $1.7 billion over the next two fiscal years. New York Mayor Bill de Blasio (D) has proposed a freeze on hiring and $1.3 billion in cuts to his budget, citing sharp drops in tax revenue in what’s become the epicenter of the U.S. outbreak.

In Chicago, a city where lingering economic woes could exacerbate the downturn, aides say they appreciate $470 million in new federal help — but added that they’re still in “conversation with Congress to seek additional aid,” said Lauren Huffman, a spokeswoman for Mayor Lori Lightfoot (D). Philadelphia leaders are anticipating difficult cuts of their own still to come.

Lawmakers authorized $150 billion in coronavirus aid for states and large cities as part of the broader $2 trillion package that President Trump signed into law in March. But that assistance — half of which, Treasury Secretary Steven Mnuchin announced Monday, is now available — comes with restrictions. Even when combined with additional help offered by the U.S. government, many leaders outside the nation’s capital also see it as insufficient to keep their cities afloat financially.

Federal legislators apportioned the money only to assist local governments with their efforts to respond to the pandemic, not close the revenue gaps caused by the severe, sudden economic downturn. A senior Treasury Department official, speaking on the condition of anonymity to discuss the planning, confirmed Monday the dollars “cannot be used to cover general budget shortfalls.”

Meanwhile, the money is funneled through states, with direct federal assistance only available to the largest metropolitan areas, depriving less populous cities of federal dollars as they brace for their own financial struggles. Even Atlanta — a sprawling major Southern city, but one with fewer than 500,000 people as of the last census — may not be eligible to seek federal funds on its own, said Anthony, the NLC’s leader. (A spokesman for Democratic Mayor Keisha Lance Bottoms did not respond to a request for comment.)

“The reality is that, if a city of 500,000 has challenges, [then] a city of 400,000 and a city of 300,000 and 100,000 has the same challenges,” said Stephen K. Benjamin, the Democratic mayor of Columbia, S.C. He called on Congress to make more aid directly available to more metro areas, predicting his city would face a “precipitous” decline in revenue.

Congressional Democrats — led by House Speaker Nancy Pelosi (Calif.) and Senate Democratic Leader Charles E. Schumer (N.Y.) — have put forward new legislation that would further enhance the aid to state and local governments in need. But Republicans have fiercely resisted the idea, focusing their attention instead on trying to boost loans available to small businesses. The result is a partisan stalemate between House and Senate leaders now bickering from afar with their chambers out of session.

On Sunday, the nation’s top governors similarly called on Congress to act: New York’s Andrew M. Cuomo (D) and Maryland’s Larry Hogan (R), writing on behalf of their peers, asked lawmakers to allocate $500 billion in new financial assistance to “stabilize state budgets and to make sure states have the resources to battle the virus.” They added the money needed to be “separate from much-needed fiscal stabilization for local governments,” raising the potential for a much higher price tag if Washington seeks to rescue cities and states in greatest need.