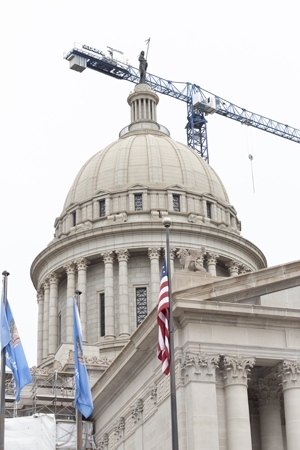 Construction is photographed at the State Capitol on Tuesday, October 16, 2018 in Oklahoma City. (Emmy Verdin/Photographer)

The Legislature has passed a few measures intended to investigate state agencies and their budget requests. Successful attempts in the past have created agency audit commissions, and top Republicans have called for creating a new office that oversees state finances in higher detail. Another Republican has filed a bill requiring agencies to utilize a practice known as zero-based budgeting. The bill’s author is state Sen. Adam Pugh, R-Edmond, and he said that process would allow lawmakers to delve further into why the agencies request the funding they do and help delineate priorities.

Senate Bill 93 would require all agencies to justify every dollar in their appropriation requests on a four-year rolling basis. It would require those agencies to also undergo performance or operating audits, as determined by the state auditor and inspector’s office.

Under current law, agencies base their annual budget plans on the previous year’s appropriation and include increase requests. For example, the Department of Corrections has asked for funding increases to build a new prison.

Pugh said that when he was on the campaign trail, voters were interested in amplifying accountability measures, and that incoming Gov. Kevin Stitt has made similar remarks.

“There’s a lot of ideas on how to do that, and they don’t necessarily have to be mutually exclusive ideas,” he said. “This is at least one component of reforming the budget process.”

Every year, agency directors speak to legislative committees about their department’s mission and the kinds of programs it administers. They then explain their budget request. However, the hearings are relatively short, and they don’t often get down to specifics in regard to program priorities or expenditures on them. Pugh said that this bill would allow more time for that. Outside help could help lawmakers operate with more evidence.

“Sometimes we have to be willing to say that program doesn’t work, or it’s not working, or it needs to be tweaked, or there’s another priority,” he said. “We’re trying to structure this budget process in a manner that can produce some tangible measurements.”

He said the bill could allow lawmakers to work with the Agency Performance and Accountability Commission. That new body contracts out performance audits for the state’s top-appropriated agencies. It began its work this year. Similarly, it ensures those agencies are audited every few years.

“What I’d like to do is marry those timelines up so they’re synchronized,” Pugh said.

Erica MacKeller, an analyst at the National Conference of State Legislatures, said that no states really use zero-based budgeting every single year. However, many use the practice that Pugh recommends in that they use it to assess agency funding on a rolling basis.

Incoming Senate President Pro Tempore Greg Treat filed Senate Bill 1, which would create an independent oversight office for agencies and help lawmakers draft the budget. It would be called the Legislative Office of Fiscal Transparency, and it would answer to a bicameral oversight committee.