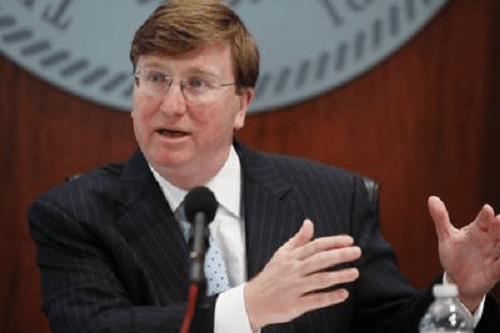 Mississippi Gov. Tate Reeves said Friday that he is extending his statewide stay-at-home order by one week to try to slow the spread of the coronavirus.

The order has been in place since the evening of April 3, and it originally was set to expire Monday morning. The extension expires April 27.

“We need one more week to break the back of our enemy,” Reeves said during a news conference Friday morning. He thanked people for their strength, courage and perseverance.

Reeves said he wants to reopen the economy when it’s safe, and that could mean easing restrictions in some parts of the state but not in others after the new stay-at-home order expires. He also said his other orders, including one requiring people to avoid large groups and to maintain distance from one another, remain in place.

Reeves said that Mississippi is in the “worst, hardest” part of the curve of virus cases.

“I know we cannot stay in this position much longer, but we are still in the eye of the storm,” Reeves said.

He said he will allow lakes and beaches to open starting Monday, but people will not be allowed to go in large groups. He also said that starting Monday, businesses that have been deemed “nonessential,” such as florists and clothing stores, can open for drive-up sales. He also said salons, for example, can do drive-up sales of shampoo and other supplies.

The governor’s announcement of an extension came the day after he said that economic problems caused by the coronavirus pandemic are “insane” as Mississippi — like other parts of the U.S. — continues to see steep increases in the number of people filing for unemployment benefits.

He said Friday that “many small businesses are about to fold” and working-class people are bearing the brunt of economic problems.

Mississippi processed more than 129,500 unemployment claims between March 14 and April 11, according to numbers released Thursday by the U.S. Employment and Training Administration. Reeves has said the usual number is no more than 1,000 a week.

The Mississippi Department of Employment Security is on a seven-day-a-week schedule and has brought in extra workers to process claims, but people are still having trouble reaching the agency to apply for benefits because of the high demand.

“It’s now a 14,000% increase in lost Mississippi jobs. Many more still can’t get through because of the surge,” Republican Reeves said Thursday on Twitter. “This is insane — the bleeding has to stop. Lives depend on this as well. Please pray for wisdom as we consider all options. Our people can’t take much more.”

Grocery stores, pharmacies and several other types of businesses that are considered essential have remained open under Reeves’s order. Restaurants are allowed to offer drive-thru or carry-out services. Many businesses, including automotive and tire manufacturing operations, have furloughed workers.

The state health officer, Dr. Thomas Dobbs, said Friday that Mississippi had at least 3,793 confirmed cases and 148 deaths from the coronavirus as of Thursday evening. That was an increase of 169 cases and 11 deaths from the previous day. The state’s population is about 3 million.

For most people, the coronavirus causes mild or moderate symptoms, such as fever and cough. But for others, especially older adults and people with existing health problems, the highly contagious virus can cause severe symptoms and be fatal.