Minimum wage ticks up in Arkansas this week 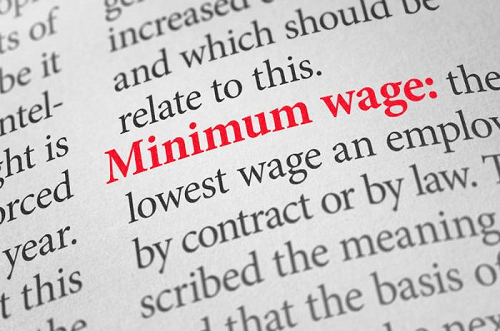 Thousands of Arkansans will get a pay raise soon, compliments of a ballot measure approved by voters in November to gradually increase the state’s minimum wage to $11 an hour by 2021.

For an employee working 40 hours a week, that’s a weekly pay increase of $30 — from $340 to $370, not including deductions for taxes and other withholdings.

“It’s easy to not see how a few dollars a week would make a difference, but the cumulative effect of that raise does make a difference,” Bruno Showers, senior policy analyst with Arkansas Advocates for Children and Families, said last week.

Arkansas Advocates for Children and Families and other groups that supported the passage last November of Issue 5 said 300,000 workers — or one-fourth of the state’s workforce — will benefit as the measure takes full effect over the next couple of years. It’s the second time since 2014 that Arkansas voters approved a minimum-wage increase. Both measures won with more than 60 percent of the vote.

Workers who make even slightly more than minimum wage today also will benefit from the increase as their employers hire workers under the new law and adjust pay scales accordingly, Showers said.

“Those 300,000 are in jobs that you’d expect — in retail, fast food and hospitality, generally,” Showers said. Many also work in day care and other early-childhood education programs, he said. Others work at small restaurants that serve only at the counter, and as housekeeping staffers at smaller hotels and motels.

“Tipped wages” remain unchanged, at $2.63 an hour, at places where tips are expected to equal or exceed the $9.25 an hour. If that level of pay isn’t reached, the employer is required to make up the difference.

Arkansas is among 20 states that raised minimum wages for 2019, and some 81,000 Arkansans will directly benefit from the initial increase, according to the Economic Policy Institute in Washington, D.C., a group that has generally favored raising minimum wages.

The group said six states in 2018, including Arkansas, raised wages through voters’ approval. Six others saw increases through legislative action. Minimum wages in eight states were increased through automatic, built-in adjustments for inflation. Twenty-one states use the federal minimum of $7.25 an hour, set by Congress in 2009.

In cases where a state has no minimum wage, or a wage that’s less than the federal minimum, the higher wage prevails.

More than 40 cities and municipalities have approved increases higher than the federal minimum, though none is in Arkansas. The Arkansas General Assembly in 2017 passed a law prohibiting such local increases.

Most Arkansas employers with four or more employees will be required to meet the new minimum, with some exemptions in agriculture, for commission-only workers, students in jobs-training programs and independent contractors.

Using figures from the U.S. Census Bureau and other statistics, the National Employment Law Project, or NELP, said the minimum-wage increase will particularly help workers in rural counties. The increase affects at least 30 percent of workers in 26 of Arkansas’ 75 counties, according to the group.

“The trend in localities and states pushing for higher minimum wage rates is likely to continue as wages decline or stagnate, inequality worsens or remains high, and Congress fails to take bold action to ensure that hard-working individuals can make ends meet,” NELP said in a report just before the November election.

Issue 5 needed the signatures of 67,887 registered voters to be placed on the ballot.

Reflecting pre-election polls, voters approved the 2014 ballot issue for a higher minimum wage by a similar margin. That measure gradually raised the wage from $6.25 in 2015 to $8.50 at the start of 2017.

“Despite scaremongering from critics that the state would lose jobs and workers’ wages would decline, research and data show that the state fared just as well or better than neighboring states with lower minimum wages,” NELP said in a report last fall. It noted an unemployment rate that “fell faster and average earnings rose more rapidly” in Arkansas than in five of its six neighboring states.

Denise Oxley, general counsel for the state Department of Labor, said the agency worked with businesses the past several weeks as the wage increase drew closer. “We’re handling a lot of inquiries, like we always do on minimum wage,” she said. The department has distributed posters about the new law to businesses and put more information on its website, Oxley said.