Maryland’s General Assembly gets back to work Wednesday … 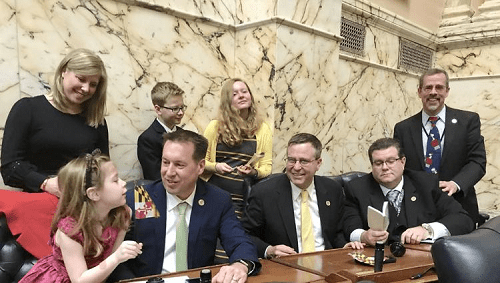 1.4.20 – Herald Mail – ANNAPOLIS — It’s 90 days of hearings, debates and deal-making. And if past is prologue, Maryland will have hundreds of new laws by the time it’s over.

Lawmakers from around the state return to Annapolis this week for the 2020 Maryland General Assembly, with major changes to its membership — and leadership — for the second year in a row.

Last year’s session ended with the death of longtime House Speaker Mike Busch, who had battled health issues for some time before succumbing to pneumonia on April 7. Senate President Mike Miller, who has been fighting prostate cancer, announced in the fall his intention to step down as president as this year’s session gets underway. House Speaker Pro Tem Adrienne Jones, D-Baltimore County, was chosen during a special session in May to replace Busch as speaker; Sen. Bill Ferguson, D-Baltimore City, has been tapped to replace Miller.

And if the 2018 elections hadn’t done enough to change the legislative landscape, more changes in the membership of both chambers occurred over the interim.

But following the initial reorganization, legislators will get to work plowing through bills and setting a budget for the new fiscal year, which begins July 1.

A bill goes through a number of steps on its way to becoming state law, and only a fraction of the bills filed actually are approved. Here’s a summary of the process, with thanks to the Maryland Department of Legislative Services:

• Drafting — The Department of Legislative Services drafts bills requested by legislators who then review the draft and prepare it for introduction. Lawmakers may file bills before the legislative session begins — Del. Neil Parrott, R-Washington, has already filed four bills, according to the department.

• First reading — The reading clerk of the appropriate chamber (House or Senate) reads the number and title of the bill into the record at the beginning of a floor session, when the entire chamber is assembled for the day’s business. The clerk also indicates which committee will conduct hearings on the bill. Legislative Services then prepares an analysis of the bill before it is heard in committee.

The committee schedules the bill for a hearing. The bill is presented to the committee, usually by the lawmaker sponsoring it, and citizens, lobbyists, local government officials and anyone else with an interest in the bill may speak or submit testimony in support or opposition. Following the hearing, the committee will vote on whether to give the bill a favorable recommendation, favorable with an amendment or unfavorable.

• Second reading — The bill is reported back to the floor with the committee’s recommendation. Bills with “unfavorable” recommendations go no further. If the committee has offered an amendment, the chamber first votes on the amendment. If it passes, another vote is taken on the bill as amended.

Amendments can be offered from the floor at this point. After all are considered, the presiding officer (House speaker or Senate president) orders the bill to be printed for its third and final reading.

• Third reading — The bill’s final version is presented to the full chamber, and a vote is taken. No further amendments are permitted. If a majority vote in favor of the bill, it is sent on to the other chamber.

• Second chamber — The bill goes through the same process as in the original chamber, except that amendments can be made on the third reading. If an amendment is made, it must go back to the original chamber for a vote on whether to concur with the change. If the two chambers do not concur, the bill is sent to a conference committee.

• Conference committee — Three members of each chamber are appointed by the presiding officers to iron out differences between the versions of the bill. Their report is then sent to both houses, and if adopted, the chambers vote on final passage.

• Presentation to the governor — Bills that have survived all the previous steps are then presented to the governor. The governor can sign or veto a bill, or allow it to become law without his signature. The exceptions are constitutional amendments and the budget bill, which become law upon final passage and cannot be vetoed.

• Vetoes — The General Assembly can override a veto if three-fifths of the elected membership in each house votes to override.

The General Assembly convenes at noon Wednesday at the Maryland State House. This year’s legislative session ends at midnight April 6.