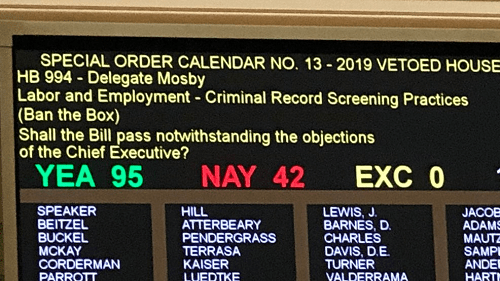 Quick Hit: On January 30, 2020, the Maryland General Assembly voted to override Governor Larry Hogan’s veto of an “Act Concerning Record Screening Practices (Ban the Box)” (“the Act”). The Act prohibits employers from “requir[ing] an applicant to disclose whether the applicant has a criminal record or has had criminal accusations brought against the applicant” prior the applicant’s first in-person interview.

Key Takeaway: The Act includes an effective date of January 1, 2020, and applies to employers who employ “15 or more full-time employees.” Thus, it appears that employers in Maryland with at least 15 full-time employees are now governed by the Act and accordingly should ensure that their hiring practices comply with the requirements of the Act.

More Detail: The Act prohibits covered employers from requiring applicants to disclose any of the following prior to his or her first in-person interview: “an arrest, a plea or verdict of guilty, a plea of nolo contendere, the marking of a charge of ‘stet’ on the docket, a disposition of probation before judgment, or a disposition of not criminally responsible.” Further, under the Act an employer may not “retaliate or discriminate against an applicant or employee as a reprisal for the applicant or employee having claimed a violation of [the Act].”

The Act does not apply to employers who provide “programs, services or direct care to minors or to vulnerable adults.” Additionally, the Act does not prohibit an employer from making inquiries that are required by federal or state law.