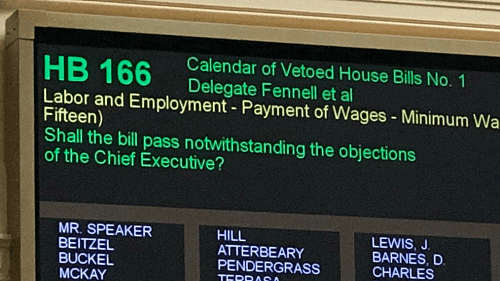 The Maryland General Assembly, which has a supermajority of Democrats, overrode Republican Gov. Larry Hogan’s veto of a bill to raise the state’s minimum wage from $10.10 to $15 an hour by 2025. Minimum wage legislative database.

The Maryland General Assembly, which has a super-majority of Democrats, overrode Republican Gov. Larry Hogan’s veto of a bill to raise the state’s minimum wage from $10.10 to $15 an hour by 2025.

Democrats, who control the legislature, say the increase is needed, because the cost of living has become high for basic needs. Republicans, including Hogan, say it will hurt the state’s economy and drive jobs away.

Sen. Delores Kelley, a Democrat who chairs the Senate Finance Committee, argued during debate that the increase will help the economy.

“People who get a minimum wage are not people that are going to put this money away in the bank. They aren’t going to buy stocks and bonds with it,” Kelley said. “They’re going to spend it, and in spending it they’re going to make local businesses more vibrant.”

But opponents, particularly lawmakers who live near other state borders, say many small businesses only have to travel a short distance to find a more favorable business climate. Sen. Andrew Serafini, a Republican whose district in western Maryland borders Pennsylvania and West Virginia, said he sees that in businesses that he consults with.

“I’m not going to take any great delight in a couple of years when I say, ‘I told you so,’ but it’s going to happen,” Serafini said. “And the sad part is many small businesses and the people that work for them are going to lose jobs, and this is just going to add fuel to that fire.”

Sen. Cory McCray, a Baltimore Democrat who sponsored the bill, said his thoughts are with the 573,000 people who will benefit from the increase.

In his veto letter Wednesday, Hogan noted that Maryland voted in 2014 to raise the minimum wage in stages from $7.25, and the last increase to $10.10 only just happened last year. He noted that small businesses facing a choice of paying a minimum wage of $7.25 in neighboring Virginia or $15 in Maryland could reduce jobs or eliminate operations in Maryland.

“Making Maryland’s minimum wage more than double that of Virginia could be too much for our economy to bear,” Hogan wrote.

The governor offered a compromise to legislative leaders to raise the minimum wage to $12.10 an hour by 2022, but the proposal went nowhere.

“We are obviously disappointed that the legislature completely ignored the governor’s reasonable compromise proposal to protect jobs and small businesses,” said Michael Ricci, Hogan’s spokesman. “So much for olive branches.”

California, Illinois, Massachusetts, New Jersey, and New York also have approved a $15 minimum wage, as has the District of Columbia.