Maryland and Virginia are among nation’s best states, survey says 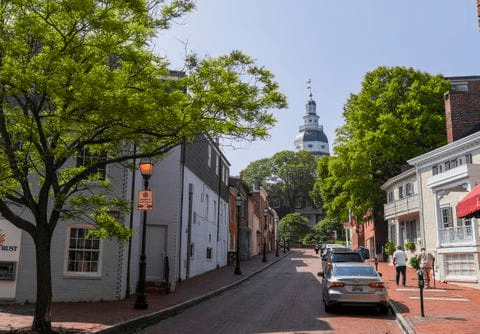 The Maryland State House in Annapolis. A U.S. News & World Report ranking indicates that Maryland and neighboring Virginia are two of the best states in the country. (Jonathan Newton/The Washington Post)

As states go, it doesn’t get much better than Maryland and Virginia, according to an annual “Best States” survey by U.S. News & World Report. Maryland came in at No. 6, and Virginia at No. 7.

The survey ranks states based on 70 metrics, including education, health care, the economy, public safety, roads and the fiscal health of the state’s government, as well as “the opportunity it affords its residents,” the report said.

Both states jumped several spots compared with last year, when Maryland ranked No. 13 and Virginia was No. 20. The District isn’t included in the annual ranking.

Maryland Gov. Larry Hogan (R) said in a statement in response to the report that Maryland has made improvements in recent years.

“Marylanders have pulled together over the last four years to unshackle our state’s great potential,” he said. “We have made real progress making this the best place to live, work, and raise a family.”

According to U.S. News, the Top 10 states are as follows:

According to the survey, 12.2 percent of adults in Virginia are uninsured, and the state’s obesity rate is 30 percent, compared with the national average of 31.3 percent. Virginia has a high school graduation rate of 86.7 percent and an average household income of $71,535.

U.S. News & World Report said Washington state ranked at the top not just because of its big technology employers, such as Microsoft and Amazon, but also because it had “an abundance of relatively inexpensive energy” because of its hydropower and wind sectors.