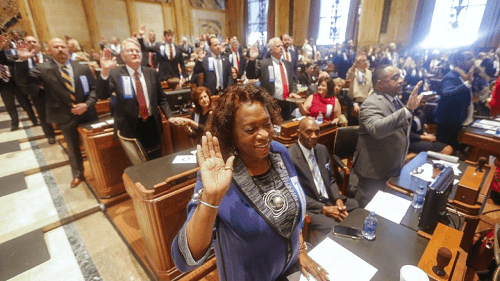 A Louisiana Legislature packed with dozens of new members starts its first lawmaking session of the term Monday, with a grab bag of topics for debate and none of the budget woes that preoccupied the last term.

Lawmakers will consider whether to legalize sports betting and recreational marijuana, whether to do away with Louisiana’s use of the death penalty or change the means of execution, how to spend a multimillion-dollar surplus and what approach they’ll try to combat high car insurance rates.

And they’ll do it without the financial gaps that became the primary focus of lawmakers and governors for a decade, after a tax deal brokered by Democratic Gov. John Bel Edwards and the majority-Republican Legislature last term stabilized the budget picture.

The 85-day session begins Monday at noon. Edwards speaks to the House and Senate at 1 p.m, to outline his agenda and offer a state-of-the-state assessment of where things stand at the start of his second four-year term.

More than 1,100 bills have been filed by lawmakers for debate. Taxes can’t be considered. Otherwise, topics allowed for review are wide open.

With term limits wiping out many previous lawmakers, this Legislature will look different. The 105-member House has 45 new members, including two former senators. The 39-member Senate includes 20 new faces, 10 of them moving over from House seats.

Though the governor initially didn’t propose a teacher pay raise, he’s now asking to steer the $39 million increase he’s recommending for public schools to cover a $500 salary hike. Education groups are seeking larger raises, money for college faculty pay boosts and other spending increases — and will be making their pitches to lawmakers.

But first, Edwards and legislative leaders must agree on a revenue forecast, to determine how much money the state will have to spend.

Despite four years of rejections, Edwards again will ask lawmakers to pass legislation aimed at lessening the private sector pay gap between men and women and to raise Louisiana’s minimum wage above the federal rate of $7.25 an hour. Those proposals are long shots in the majority-Republican House and Senate, facing strong opposition from business organizations.

The top Republican priority for the legislative session involves sweeping changes to Louisiana’s civil litigation system to limit damage claims against businesses, with a special focus on the damages awarded in car accident lawsuits. The proposals are called “tort reform.”

Business lobbying organizations say Louisiana’s legal climate encourages people to sue insurance companies and other businesses. They propose changing the rules for accessing courts and suing over injuries. Many GOP lawmakers ran on the issue, arguing that could lower car insurance costs.

Edwards said he’s willing to negotiate, but hasn’t committed to any of the proposals filed.

Republicans question what the governor will consider since he received significant support for his reelection campaign from personal injury lawyers who criticize the civil litigation measures as worthless in lowering car insurance rates.

Two Republican bills would keep transgender students from playing sports aligned with their gender identities, similar to proposals in several other states and drawing Louisiana into a national debate over LGBTQ rights.

Lawmakers also will wade into discussions of whether college athletes should receive compensation, whether to loosen vaccine requirements and whether to ban discrimination based on a person’s natural hairstyle.

They’ll revisit annual debates, such as deciding if they want to expand Louisiana’s medical marijuana program, require recess time for children in school or centralize the state’s sales tax collections, rather than having local officials do the work.

In other areas, the House and Senate will review a proposed bill of rights for children in Louisiana’s foster care system, determine if they want to allow online lottery ticket sales and consider banning raffles of animals at carnivals.