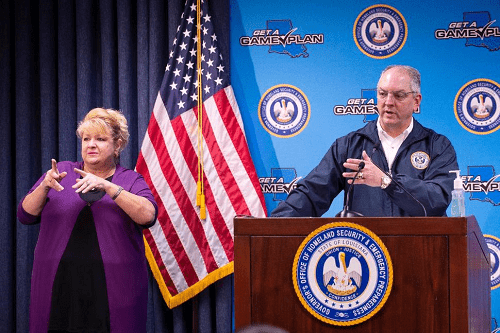 An 18-member commission will help the state plot a course for eventually reopening businesses shuttered during the fight against the new coronavirus, Gov. John Bel Edwards said Thursday.

The Democratic governor’s announcement came as the state’s COVID-19 death toll climbed by 53. More than 1,100 deaths have been attributed to the disease in Louisiana.

He said the group will be “instrumental” in helping the state revive its economy.

“We’re not going to get back to normal until we have a vaccine and some effective therapeutic treatments,” Edwards said at a morning, live-streamed news conference in Baton Rouge. “But, we’re not going to wait until then to start reopening the economy.”

Still, Edwards made clear that the reopening won’t be immediate. He pointed to statistics indicating stay-at-home orders and business closures have slowed the spread of COVID-19 and avoided overwhelming state hospitals.

Rep. Steve Scalise, a Republican attended the news conference and agreed with the governor. “We’re not talking about picking a choice between safety and economic recovery,” Scalise added. “You can do both and we have to do both.”

More than 1,100 deaths have been attributed to COVID-19 in Louisiana — 53 were added to the death toll Thursday. But the state has seen encouraging signs in combating the virus, with slowing rates of new infections and new hospitalizations, and fewer patients on ventilators. Edwards credits people remaining physically distanced from others.

By Thursday, the state had nearly 22,000 known cases. and the number has consistently increased as testing has become more available. Officials say there are signs of hope in slowing rates of new infections and new hospitalizations, and fewer patients on ventilators.

The number hospitalized fell below 2,000 this week and those needing ventilators numbered 425 on Tuesday, well below last week’s totals.

Still, Edwards has repeatedly said social distancing must continue to keep the numbers down. In New Orleans, which has more than 5,700 cases, Mayor LaToya Cantrell on Tuesday extended a stay-at-home order until May 16. It had been scheduled to end on April 30.

Edwards on Thursday pointed to charts showing hospital beds occupied by COVID-19 patients in the state health department’s Region 1, which includes hard hit New Orleans and Jefferson Parish. He said there were 790 beds occupied by COVID-19 patients this week. Projections were that there would have been 3000 such patients had stay-at-home orders not been implemented, Edwards said.

For most people, the highly contagious coronavirus causes symptoms such as high fever and a dry cough that resolve in several weeks. But some, especially older adults and people with existing health problems, can suffer severe symptoms that can be fatal.