Photos show the aftermath of a break in. Officers dusted for prints at Eden Hill Provisions in Queen Anne.

The break-in amounted to a $5,000 hit for owner Maximillian Petty.

“Yeah, I mean it was a pretty disastrous day,” Petty said. “They looked for a safe. You could tell that’s what they wanted. You’d think that with these times, with what’s changing, with the help we all need, that everyone would cool down whether you’re breaking the law, breaking the lock, breaking social distancing. But it turns out those who break the law are still going to come out.” 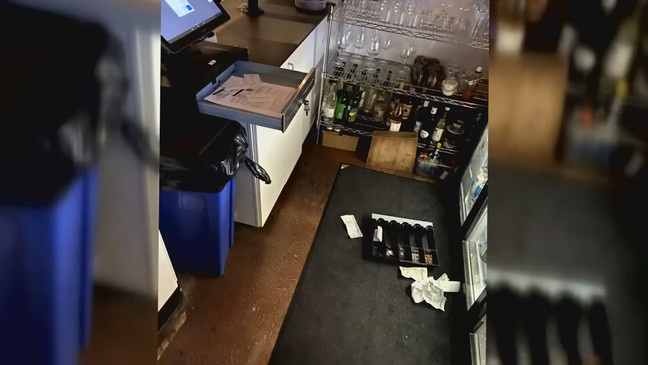 Photos show the aftermath of a break in. Officers dusted for prints at Eden Hill Provisions in Queen Anne. (Photo: KOMO News)

In one week in March the Seattle Police Department reported twice as many business burglaries compared to the same week of 2019 here in Queen Anne, a jump from 54 to 104.

Commercial burglaries and break-ins around the city are up 15 percent compared to this time in 2019, according to crime stats from the Seattle Police Department. Vehicle thefts are up 28 percent too.

“We have caught multiple burglars in progress in commercial facilities because the alarms were triggered,” Best said. “Officers were able to respond quickly.”

Life in Seattle’s Chinatown International District has not been any easier.

Amid the pandemic there’s been blatant racism here.

“I don’t really know if the stigma is going to leave,” Chan said.

On top of that at least a dozen businesses have been broken in to.

Jade Garden, now boarded up, is one of them.

Chan is out $2,000 thanks to crooks breaking a window in a time when sales are down 70 percent over the last month.

Just down the street Yummy House Bakery has been broken in to. Elsewhere, storefronts are empty, signs in windows and uncertainty surrounding this community.

In Tacoma non-residential burglaries are up nearly 29 percent between mid-March and mid-April compared to the month before. Vehicle thefts are up 24 percent.

In Snohomish County the vehicle thefts were down in March (19 percent) and overall theft calls saw a jump of roughly nine percent.Cole Miller | Alarming spike in crime during COVID-19 pandemic

As of now it’s anyone’s guess as to when we could see life go back to the way it was or whatever life after all of this even looks like.

For the businesses that have survived this far the fight wears on.

“We’re all a little defeated but we’re a strong community,” Petty said.

“It is a lot to handle but at the end of the day, this restaurant is everything to me,” Chan said. “This is the lifeline for my entire family.”

Everywhere else except for Snohomish County domestic violence calls have shot up as we are being asked to stay home. The calls were up 21 percent in Seattle for the month of March. And in King County they’re up well over normal call volume.

In Tacoma they’re up 18.3 percent compared to earlier this year