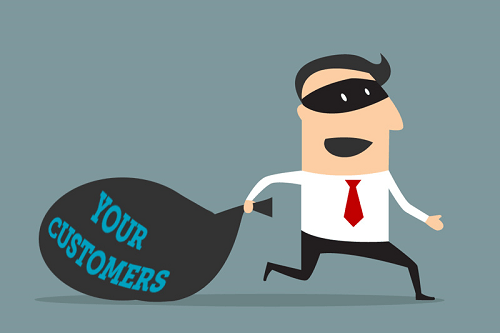 Mrs. Smith, home early from work, settled into her favorite chair. After a few minutes, she heard a knock at the front door.

Because there had been some recent (unsolved) burglaries in the neighborhood, she first peered through the small window of her front door. There stood a man – he held a clipboard and wore a white hat and shirt each emblazoned with a colorful logo “Security 123.”

Mrs. Smith disarmed her alarm system and slowly – cautiously – opened the door. She reluctantly greeted the man. He smiled in response, attempting to put her at ease.

“My name is Bob Johnson. I am with Security 123. Here is my identification card.” The man showed Mrs. Smith his card, which appeared legitimate and gave her further comfort.

“Ma’am, I know your security system was protected and monitored by Security ABC.”

That is right, Mrs. Smith thought.

“They were a fine company, but they are now out of business,” he said. “I am sorry to report that Security ABC had financial trouble and they are no longer monitoring your alarm system.”

Mrs. Smith’s mind raced. Out of business? Who will protect my home and my belongings? What about those burglaries? What will I do now? How much will it cost to get a new alarm company? Will I have to pay for all new equipment?

“Don’t worry Mrs. Smith,” the man assured her, as if reading her mind. “I have great news. Security 123 bought Security ABC and agreed to take over its accounts. We will be monitoring all of Security ABC’s alarm accounts – including yours – without interruption and with no additional charge to you.”

“You just have to sign this new contract with our company and let me connect your alarm panel to our central station,” he continued. “It will take less than five minutes and you will be all set. No interruption of service.”

Mrs. Smith breathed a sigh of relief. Thank goodness for this nice young man and his company, she thought. How fortunate that someone will still be monitoring my alarm system and alerting the police or fire department if I  have any problems.

“Please come in,” Mrs. Smith offered. The man entered, placed his clipboard on the nearby kitchen table, and asked Mrs. Smith where the alarm panel was located. She directed him to the basement and led him there.

As promised, in just a few minutes, the man was done. He redirected the alarm system to a new phone number belonging to his company. He gave Mrs. Smith some accompanying paperwork about Security 123 and asked for her signature and some additional information (credit card data, etc.) on what he described as a form contract (which he told her was “for her protection” and just something “lawyers make him do”).

Mrs. Smith provided the information and otherwise signed the form contract without reading it – happy that her alarm system would continue to work.

The man thanked Mrs. Smith for her time, assured her that his company would do everything possible to keep her safe, and he departed Mrs. Smith’s home with a smile.

That scenario is a fictionalized version of real events – including a series of cases of customer theft that I prosecuted on behalf of my corporate clients. Mrs. Smith’s alarm company, Security ABC, was not out of business. It was not taken over by Security 123; rather, it was an active competitor to Security 123.

Questions abound: Is Mrs. Smith bound in contract to two companies? Can she escape the Security 123 contract? How about the Security ABC contract? If she disavows either contract, can either company charge her early termination fees for such cancellation? Does Security ABC have a claim against Security 123? Was a crime committed?

Mrs. Smith could be bound to both companies, but likely not. Under the facts presented, Security 123 procured Mrs. Smith’s signature on its contract through fraud; thus, there is likelihood that a court would void the Security 123 contract.

Also, Mrs. Smith may have a claim against Security 123 for treble damages and attorneys’ fees under a state consumer fraud or deceptive sales practices statute. She also may be able to refer Security 123 to the state attorney general’s office for possible civil claims or criminal prosecution.

It also arguably has a case against Mrs. Smith for breach of contract, collection of early termination fees, and/or the balance due under the contract; however, pursuing such claims against Mrs. Smith under these circumstances may not be worth the effort and also may yield negative publicity for the company. So, Security ABC’s legal strategy must be reconciled with the practical implications of brining claims against its own customer.

Dishonest sales practices hurt the customer, hurt the alarm companies and hurt the industry. Local and state government officials, the Federal Trade Commission, industry groups and security companies themselves can play a role in educating customers and helping people like Mrs. Smith avoid falling victim to these scams.

Timothy J. Pastore, Esq., is a Partner in the New York law firm of Duval & Stachenfeld LLP (www.dsllp.com), where he is the Chair of the Security Systems and Real Estate Cybersecurity Practice Groups. Before entering private practice, Mr. Pastore was an officer and Judge Advocate General (JAG) in the U.S. Air Force and a Special Assistant U.S. Attorney with the U.S. Department of Justice. Reach him at (212) 692-5982 or by e-mail at tpastore@dsllp.com.