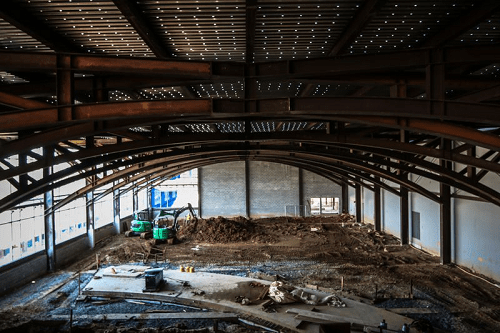 A view of the construction at the site of the new Cole Field House at Maryland.

Some construction projects in Maryland are costing tens of millions of dollars more than original estimates, in large measure because of a lack of skilled trades in the region.

The increase in price for just two large projects at the University of Maryland? About $64 million.

“It was about 2014 when the labor shortages started appearing, first in the D.C. submarkets then in Baltimore a couple years later, then fairly prevalent throughout the state now,” said Maryland Center for Construction Education & Innovation President Bob Ayudkovic.

He said that the labor shortages in Maryland, and nationally, can be traced back to the Great Recession of 2008 to 2009.

The Board of Public Works on Nov. 20 tabled votes on $64 million more for two projects: the University’s Cole Field House, and the construction and design of a new residence hall and replacement dining facility.

The multi-story residence hall will have 900 beds in “suite-style units”; the dining hall will seat 1,200 and replace an outdated facility.

The new, final construction cost for the residence hall and dining facility is $155.6 million — an increase of about $40 million from a June estimate, according to documents presented to the board.

Construction costs for the renovation and expansion of Cole Field House — “to create an academic,research, and athletic facility,” including football practice fields — have increased by about $24 million since January, bringing the project total to about $210 million, according to board documents.

Supporting documentation sent to the board said that the cost of the total projects has increased based on issues within the construction industry.

Issues include a high demand for and low supply of skilled workers, which result in higher wages, adjustments to the scope of projects and rebidding trade packages. The documentation also indicated that multiple large mechanical, electrical, and plumbing contractors are no longer in business.

Holder Construction Co. and Gilbane Building Co. each in charge of one of the university construction projects, did not respond to requests for comment.

Lt. Gov. Boyd Rutherford said during the board meeting that Maryland lacks skilled workers who are able to fill in-demand, high paying jobs.

“I would like to see more students in Maryland be exposed to apprenticeships and skills training opportunities so they are aware of all of their options for employment,” Rutherford said in a statement.

At the Nov. 20 meeting, Rutherford — attending for Gov. Larry Hogan — said that Maryland’s unemployment rate is the lowest it’s been in 11 years.

Rutherford said that it’s created a challenge for some skilled labor and skilled professions in finding labor.

“One of the things that we’ve been working at, the last couple of years, particularly with one of the local school districts, is getting the trades back into these local schools,” Rutherford said.

“Construction trades are willing to help because they need people,” Rutherford said.

Rutherford said there is a sense of urgency in bringing trades back into the schools.

“There are young people who could use these skills and an opportunity to make a very good living coming out of school,” Rutherford said.

The cost of labor increases in part because people have to make the lumber and materials, which includes production cost, said Aydukovic.

The cost of professional services, such as architecture, engineering and financing, also has an additional cost.

Ayudkovic said that there is wage inflation among construction companies across the United States, “from the lumber yards, to the skilled craftspeople on site, to the professionals in the office, that are contributing to the increasing costs of construction.”

He said that these jobs, which include the groundwork of being electricians and plumbers, and laborers of a certain sort, take a lot of brains and dedication.

Ayudkovic explained that it took until 2016 before profit margins returned to normal and some contractors just simply ran out of runway waiting for normalcy to return.

“What parent would encourage their kids to go into construction when it was nothing but bad news for the better part of six years, so we lost almost an entire generation of new entries to the industry,” Ayudkovic told Capital News Service.

Ayudkovic said that there were several contractors that went out of business, one of them being Truland Group Inc., an electrical contracting business which filed for bankruptcy protection more than five years ago.

Marco Giamberardino, vice president for government and public affairs of the National Electrical Contractors Association, said there’s a serious need to build the next generation of skilled electricians.

Daniel Loveless, a business manager of Steamfitters Union Local 602, said that tradespeople are making upward of $100,000 a year out of high school.

Loveless said that it’s important not to mislead young men and women in their last year of high school to take heating, ventilation and air conditioning training, thinking that they will immediately go and perform the job because it’s a five-year intensive program.

“We’re a very diverse trade and I’d like them to see high schools prepare students but also I’d like to see us be able to talk to these kids so that they can be aware of opportunities like this,” Loveless said.

Loveless wants to “get the message to the parents to have a conversation with them about their child and allow them to know more about what trades and construction people do so they don’t uneducatedly discourage their child from pursuing a career like this.”

“College isn’t for everyone, whether it is a financial reason,” Loveless said. “Some people are meant to work with their hands and build.”

Loveless said that contractors sometimes go out of business because it’s highly competitive and sometimes when they are competing to win a contract, they end up losing money.

He said lately there is more work out there and the industry has become more competitive.

Loveless said his union took in about 225 new apprentices last year and expects to take in about 250 this year.

“If we have any shortage of manpower, not gender specific, it has to do with a specialized and specific skill set. So we do not have a real shortage of people for our contractors,” Loveless said.

The state’s Department of Education in November published its four-year Career and Technical education plan, which aims to prepare students for jobs “meeting the skilled workforce needs of employers, including in existing and emerging in-demand industry sectors and occupations.”

Adam Mendelson, a spokesman with the Maryland State Education Association, said that expanding career and technical education is a key component of the Blueprint for Maryland’s Future, recommended by the state’s Kirwan commission.

“Educators know that making sure that more students have access to dynamic career, technology and education programs won’t just enhance the quality of our schools, it will also help our economy when more students graduate with job-ready industry certifications for well-paying jobs,” Mendelson said.

Both projects are scheduled to be considered Wednesday, at the next Board of Public Works meeting.