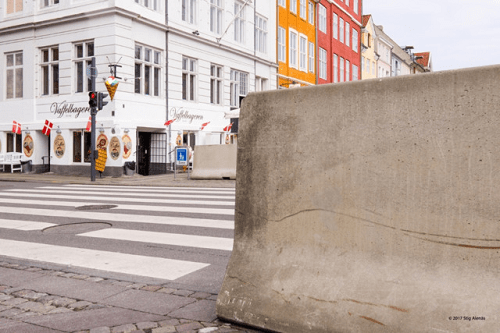 Temporary concrete barriers, such as those pictured here, are increasingly being utilized to prevent vehicle attacks in cities around the world. They are but one of a myriad options city leaders and organizations have at their disposal to mitigate vehicle attacks.

The vast majority of discussions involving security and parking areas focus on protecting people and property from vandalism, theft or violent crimes. Thus, when planning security features for a new or existing parking lot or garage, the first consideration is the level of security required for that particular facility. A parking garage for a foreign embassy or federal courthouse will require far more serious security measures than a parking lot for a mall. Other primary factors to consider include the frequency of vehicles moving in and out and whether there will be vehicle inspections performed or a fully automated system at the entrance.

When evaluating the security risk for a car bomber or vehicle attack for a given facility, focus on the weights and velocities of vehicles that could be used to attempt penetration into sensitive areas. A vehicle moving towards a barricade has a certain kinetic energy, the major measure of how much “hitting power” it possesses. Mathematically, kinetic energy is derived from the vehicle velocity and its weight (mass). On impact, some energy is converted to heat, sound and permanent deformation of the vehicle. To stop the vehicle, the stopping point must absorb the remainder.

The remaining energy varies depends primarily on the velocity of the vehicle at the moment of impact. The amount of kinetic energy possessed by a vehicle changes by the square of its velocity. A vehicle moving at 50 mph has 25 times as much kinetic energy as at 10 mph.  An armored car weighing 30 times as much as a Toyota moving at 10 mph has less hitting power than a Toyota moving at 60 mph.

Because of the relationship of velocity to the total kinetic energy, every effort must be made by the security engineer to force a vehicle to slow down before it reaches the barricade.

Security Starts With an “S”

Straight lines make for faster and easier approaches for vehicles, so it’s best to create curves on access roads to your facility as a natural impediment to speeding cars or trucks.

The most frequently used technique is to require a sharp turn immediately in front of the entrance. When vehicle speed is reduced by 50 percent, “hitting power” is reduced four times. If the speed is reduced by two-thirds, the force of impact is reduced nine times. Failing to understand this and not using the proper equipment to counter the threat leads to a false sense of security.

Upon designing a way to slow down vehicle approach, precautions should also be taken that the attacking car cannot make a “corner cutting shot” at a barricade. Often only a light post defines a turning point and a speeding car can take it out and not even hesitate. Knolls and other impediments should be considered.

Where turns cannot be created, many are turning to an early warning system. This system is best applied at locations where there is a long and relatively straight run into the facility that would allow a large vehicle to build up its speed. A vehicle traveling at 60 mph can cover 88 feet per second so it is imperative that the guards be alerted immediately.

Intelligent vehicle systems can check the velocity of an approaching vehicle, or set off an alarm if a car is coming down the wrong lane. Intelligent systems will also protect innocent drivers who might be trapped between barricades and a speeding, approaching vehicle. Intelligent vehicle systems also are able to tell if a vehicle is too large to enter a parking structure, potentially saving countless dollars on structural repairs.

Continuous Doppler Radar picks up instantaneous changes in velocity and addresses the threat scenario in which an inbound vehicle approaches at normal speeds and then accelerates to commence the attack. It will also warn if a hidden vehicle suddenly passes a larger vehicle and attempts an attack. Once alerted, the guards can take action, including raising the barrier systems.

Security equipment for parking facilities ranges from tire-puncturing devices to simple swing arm gates to pop-up crash barriers built into the roadway that will stop errant vehicles dead in their tracks.

Use the Barrier You Choose

Today’s barriers and bollards are capable of stopping and destroying a truck weighing up to 65,000 pounds and traveling at 50 mph. Such barricades can be raised or lowered at will to stop traffic or let it through. In an emergency, the thick steel plates or bollards pop out of the ground within 1.5 seconds.

With any barrier system, frequency of operation is also a key consideration. For example, a sliding gate would not be practical for a business that requires admitting and releasing hundreds of employee cars per day. In reality, due to the inconvenience to the employees, most operators would simply leave the gate open.

With vehicle barriers, the most common security breach is tailgating. When a system suspends a tailgating car, it’s literally doing its job – stopping an unauthorized vehicle from entering a facility. Most vehicle barrier systems are set up to allow only one car at a time. How do you avoid these “accidents,” yet avoid weak links?

One way to accomplish this is by employing loop detectors. These little sensor subsystems determine when the first car has passed by and automatically and immediately drop the gate or raise the bollards.

Another common planning deficiency occurs when designers choose non-certified barriers or barricades. No area is more critical to the vehicle barrier selection process than testing. Without adequate testing, there is no assurance that the barrier will resist the threat. Certified equipment has been tested and proven to work under extreme conditions, giving planners the confidence they rely on. Testing is normally by an independent testing company or government agency, such as the U.S. Department of State (DOS) and military. Comprehensive reports of test results are issued and are available from the testing agency or manufacturer.

When integrated properly into a total system, including fences, lights, alarms, gates and other security components, well thought out vehicle barrier systems are a key measure in preventing threats to sensitive resources. It’s important to consider supplemental gate and fencing reinforcements that may also be needed to optimize vehicle barrier effectiveness. Failing to understand this and not using the proper equipment to counter the threat may lead to a false sense of security.