“It’s not a joke”: Law enforcement partners with FBI Dallas for school safety 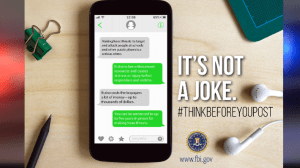 As another school year kicked off this week, local law enforcement has partnered with FBI Dallas in hopes to keep everyone safe with a strong message of, “it’s not a joke.”

The Amarillo Police Department says the department has already had three school threats since school began with cases filed to be sent to prosecutors.

“The biggest problem that we have is with the students and their parents being frightened by these calls,” said Chief Ed Drain of the Amarillo Police Department. “We want people if they see something, to say something, but by all means do not make stuff up.”

Under Texas Penal Code, chargeable offenses are a terroristic threat, false alarm or report, or an education code offense.

“There are so many folks in so many walks of life that have a license through the state that will be forever impacted,” said Jason Herring, Potter County Deputy District Attorney. “To either lose a license or never have the ability to seek a license, based on an impulsive, quick flick of the thumbs and a ‘watch me.'”

“It doesn’t matter, whether you really intended to carry out that threat,” said Robert Love, Randall County Assistant District Attorney. “Under our laws for terroristic threat and the education code, which is essentially a terroristic threat statute for schools, those things don’t matter. It matters what reaction you were trying to cause, were you trying to put someone in fear. ”

In the event of an active shooter, avoid, deny, and defend is a response that could save lives.

That could present a challenge to law enforcement responding to an event and to teachers themselves.

“We did some training out at Bushland the other day and I promise you I had over 200 teachers in there,” said Sheriff Brian Thomas of the Potter County Sheriff’s Office. “When we walked in and started firing off rounds, you could have heard a pin drop. You saw tears streaming down teachers faces. Their comments after was, ‘I didn’t sign up for this.'”

FBI Dallas say it has dealt with 700 threats in its jurisdiction since Parkland.

Together with local law enforcement, it is enforcing a zero tolerance policy against any threat.