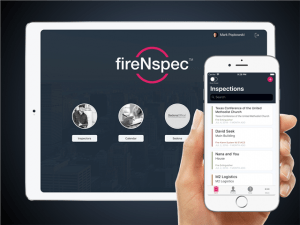 Four years ago, Houston-based integrator Modern System Concepts developed an app to ease fire inspections. Now, it’s redesigned the app, named fireNspec, to be more scalable and is rolling it out through a separate company, PnewSoft.

“It’s an inspection app which was designed for the fire industry, but it’s grown legs in the fact that it can actually do any kind of inspection whether it be security, or cameras, or anything of that nature,” Mark Popkowski, CEO of PnewSoft and owner of Modern System Concepts, told Security Systems News.

Popkowski found that across the U.S. companies have different methodologies when it comes to inspections, and built the app to cater to that. “It has a dynamic way of doing things, where you can actually create your own inspection questions or drop-downs or whatever is necessary, so that each company can actually customize the way they do inspections,” he said.

Having experience in security integration helped Popkowski in designing the app. “I kind of had the inside track to know what everybody needed—the different things—especially making sure that your employees are accountable for what they say they got done,” he said.

The app was officially rolled out in March and now has about 200 users. “We’ve had really good, positive feedback and seems to be growing,” said Popkowski.

FireNspec has a mobile application as well as a web interface, which allows users to watch inspections in progress and track technicians. The web portal and mobile application can work independently but there are more benefits from using both, Popkowski noted.

When multiple inspectors are working on a project, updates are available in real-time. “This real time approach is definitely something that sets us apart,” David Seek, CTO of PnewSoft and the lead developer of fireNspec, told SSN.

The app can also collect customer and inspector signatures, create PDF reports and give a virtual timeline of each step from the inspector. “When you get ready to give the customer a bill, you’re able to give them a printed copy of the report, so that the customer can see—this is everything that was done by the inspectors,” Popkowski said. “It allows you to keep that inspector accountable for what they did because this is date and time stamped.”

The app is already integrated with Sedona Office and Popkowski said that the company is looking to integrate it with fire companies as well as monitoring centers.

Users within a company can have different capabilities with fireNspec; the company owner can have more information available to them while a technician only sees the jobs relevant to them, Seek pointed out. FireNspec provides analysis to a company related to inspections performed, organized by the technician or by the week.

“What we have found is every company has a different way of doing things, has a different report structure, the authorities having jurisdiction—they have their own way of doing things. So, we came up with a template system that allows us to actually create custom inspection templates,” Popkowski said. “Whether it be fire alarm, sprinkler system, a security system, a camera system—whatever it be, we can actually create templates over here and make that specific for our company.”

Feedback received from fireNspec users influenced PnewSoft to create the template feature, according to Seek.

PnewSoft’s first steps will be to showcase the application at alarm association meetings and conferences, as well as an email campaign, Popkowski said.

“What we are doing is we are going out there where the users actually are,” Seek said. “The interest once we are at a conference is extremely high.”

PnewSoft currently has four employees and is working on other applications