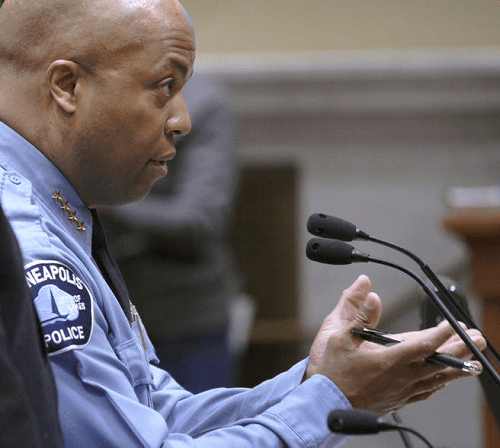 The call came over the police radio just before 3 one afternoon in June: “assault in progress” at a downtown Minneapolis apartment building.

After offering the suspect’s description — a man in his 30s, wearing a white shirt and red jeans — the female caller hung up and waited for officers to show up.

Finally, after calling back at least twice to see if officers were on their way, the woman told dispatchers that she was leaving, according to a police incident report. The suspect was long gone. By the time the call was canceled, at 3:42 p.m., it had been pending for more than 43 minutes. Ordinarily, for such serious calls, dispatchers put out a request for any available squad to search for the suspect. But on that day none was available for that part of the First Precinct.

It was one of 23 incidents that day alone where people called 911 to report emergencies of various kinds, and no police units were available to respond.

Such scenarios are becoming more common, department officials say, as the city’s population grows and the number of police officers shrinks.

Calling the department’s staffing model “broken,” Chief Medaria Arradondo said the math was simple: Without more cops, the department can’t continue to ensure even a basic level of service. He acknowledged that citizens awaiting a police response don’t care if officers were tied up at a robbery, nor should they.

The issue of police staffing took on new life last week, when Arradondo told reporters after a meeting of the City Council’s public safety committee that he wanted to add 400 more street officers by 2025 in order to keep pace with attrition and population growth. Under his latest proposal, the number of sworn officers would grow to at least 1,300. With the new fiscal year fast approaching, that would mean adding on average about 80 cops over the next five years. While conceding that the proposal wouldn’t come cheap, Arradondo says that the back-end costs of treating victims of unchecked gun violence and incarcerating the perpetrators can be just as staggering.

The plan almost immediately received pushback from some council members, including President Lisa Bender, who argued that such an increase would make the city an “unaffordable” place to live. Her colleague Andrew Johnson suggested the department instead explore moving from two-person to one-person squads for a majority of calls, a switch that he said has been tried elsewhere with success. The department now uses two-member squads to respond to most calls.

Last week, Arradondo shared a startling statistic: Over a 12-month period dating back to last summer, police officials counted 1,251 instances in which no squads were immediately available to respond to a Priority 1 call, such as a shooting, domestic assault or a drug overdose. And because of the way the data is compiled, that number might actually be higher, police say.

Of those incidents, the most common type of call was a residential alarm (109 cases), followed by business alarms (106), thefts (94), fights (93) and “unknown trouble”(93), according to a Star Tribune analysis of the underlying 911 call data. Domestic-related offenses accounted for 130 overall calls, while incidents involving firearms numbered 100 — such as a ShotSpotter activation or reports of a person with a weapon.

Department data does not detail how long each call was pending before police arrived or whether a serious emergency in another part of town was tying up all available squad cars, leaving other areas uncovered.

In a department of roughly 880 officers, only about 600 regularly respond to 911 calls, spread out over the city’s five geographical precincts. Factoring in scheduled days off and sick time, supervisors are sometimes forced to hold over officers from earlier shifts to fill gaps on particularly busy nights, officials say, racking up overtime expenses and potentially contributing to officer burnout. This has happened 262 times so far this year on the “midwatch” shift, generally from 3:30 p.m. to 1:30 a.m., officials said.

This not only takes a physical toll, but a psychological one as well, Arradondo added, citing research that says that overworked cops are more likely than their colleagues to use force in encounters with civilians and to draw complaints. Separate studies on police workloads are in the works.

“We can’t continue to expect our officers to work in conditions where they are overworked and overstretched, and not expect a negative consequence,” Arradondo said.

In a budget presentation earlier this year, the department’s chief financial officer said that about a third of overtime expenses are due to staffing shortages.

Mayor Jacob Frey, who admitted he was caught off guard by Arradondo’s request, said he agrees with it in principle, particularly if an officer shortage means that cops are spending their shifts racing from call to call, instead of engaging with community members, which results in some calls going unanswered. He declined to say how many officers the department should have, but insisted that adding none was “absolutely unacceptable.”

“There’s not just two options: This is not a choice between 400 officers on one side and zero on the other,” said Frey, adding that while he agrees budget constraints limit the number the city can hire, “those same limitations do not exist when we’re talking about five, 10 or 15.”

Any calls for more officers are sure to face resistance from City Council, several of whose members came into office on the promise to explore alternative crime-fighting measures. In the last budget, for example, a proposal that would have civilianized eight mostly behind-the-scenes jobs, freeing the officers in those roles to return to street duty, was unceremoniously struck down. With gang-related violence on the rise and the opioid epidemic gripping parts of the city, the debate of how many officers a city the size of Minneapolis should have has taken on added gravity. Minneapolis has a lower number of officers per resident than similarly sized U.S. cities.

Even with crime rates hovering near historic lows, Arradondo said that more officers are needed because the department’s call volume has increased significantly, as police are increasingly being asked to address issues arising from social conditions like poverty, inadequate housing and isolation. At the same time, Minneapolis, like other departments nationally, is having a tougher time recruiting and hanging onto new officers.

Meanwhile, response times vary widely in parts of the city.

Jill Osiecki, interim director of the Uptown Association, said that merchants have been generally pleased with police efforts, including on a recent trend of people passing counterfeit bills at neighborhood businesses. Still, she and others said they wouldn’t say no to more cops, particularly on summer weekend nights, when bar crowds get bigger and rowdier.

D.A. Bullock, a local filmmaker who regularly speaks out about policing issues, said the approach of adding more cops whenever crime rises represents an outdated way of thinking. He urged Arradondo to consider Johnson’s proposal of shifting details to single officers rather than teams of two for every call.

His concerns were shared by Eduardo Cardenas, an organizer with the Central Area Neighborhood Development Organization, who said that residents are sometimes too quick to call police for incidents that don’t necessarily require a law enforcement response.

“There are a lot of incidents of violence that are fueled and perpetuated by personal situations and systemic traumas in our community, that no amount of police is going to prevent,” he said. “And having more police respond to that sooner may or may not make any difference.”

Libor Jany is the Minneapolis crime reporter for the Star Tribune. He joined the newspaper in 2013, after stints in newsrooms in Connecticut, New Jersey, California and Mississippi. He spent his first year working out of the paper’s Washington County bureau, focusing on transportation and education issues, before moving to the Dakota County team.