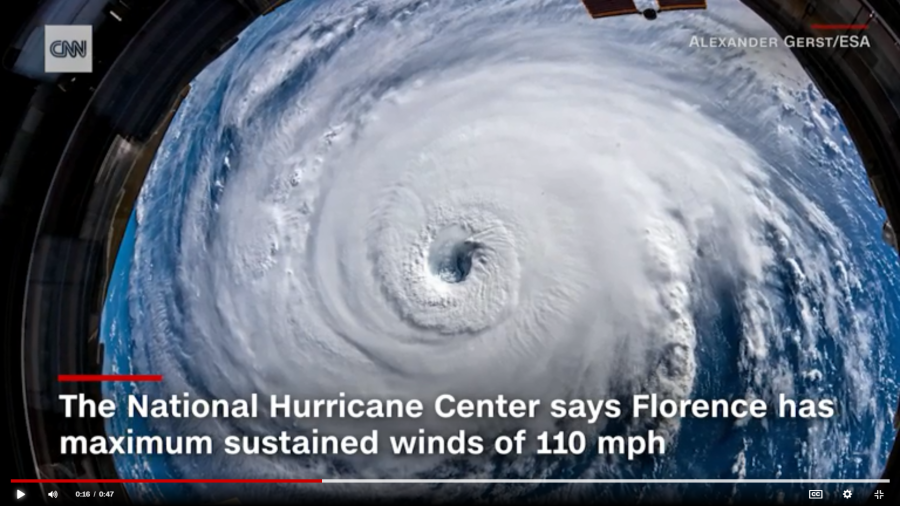 Hurricane Florence is beginning to be felt on the southeastern shorelines of the United States, and is expected to bring extreme winds, flooding and rainfall through the Carolina coast and inland over the next several days. According to CNN, by the time the hurricane leaves, it is expected to have dumped 10 trillion gallons of rainfall over North Carolina. Power losses are expected to be in the several millions. While many coastal cities in the area are under evacuation and at risk of dangerous flooding, other parts of the region are expected to be hit with wind and water damage and power outages, as well.

Though many alarm companies in the area have weathered hurricanes and other natural disasters before, it doesn’t make preparations any less urgent. Those in the industry are preparing with well-designed disaster plans in effect, technological fail safes, and careful planning — planning that involves taking care of their employees and locations, as well as taking care of their customers both before and after the storm.

First and foremost, said those security industry experts in the region, communication with the customer is key at a time like this. “Educating our customers on what is going on is our top priority right now,” Jeff Debonzo, director of sales at Sonitrol Security Systems of the Triangle, Raleigh, N.C., told SDM. Debonzo said that the company is focusing on communication with its access control customers on their systems, battery backup and how long that will last, and suggesting they lock their doors with a hard key as a fail-safe.

If power loss stretches past a few days, for example, battery backups may no longer work, making communication with the customer even more important. “Every interaction we have with a customer, we are making a point of talking about what they need to know, over meetings, email, phone calls and everything,” Debonzo said.

CPI Security Systems, Charlotte, N.C., is focusing on being proactive as well, reaching out to customers via email, blog and website, and social media outlets. The company is giving out information regarding hurricane preparedness and information about low batteries, power outages and troubleshooting their panels, according to Heidi Cowley, vice president of marketing and corporate communications at the company.

In addition to customer communication, alarm companies in the region have been preparing their central stations and office locations for the storms, including shutting down offices and working remotely, as well as preparing central stations or locations that will remain open for extended employee stays and an increased number of events and calls.

“We have hurricane-rated glass, as well as two generators that we can run on indefinitely at our central station. We are confident we will stay in operation during this weather event,” Cowley shared. In addition, she said, showers, sleeping supplies, and food at the central station are planned for. The company also moved staff located in the coastal areas to hotels further inland, and took the precaution of moving any vehicles by the coast inland as well, for safety.

Cowley said CPI Security — which is no stranger to such events, having been through Hurricanes Matthew, Irma and others in recent years — has a group of employees that band together during these times, not only within the company and at the central station itself, but outwardly to the surrounding communities. “We have a real family-oriented culture and we’ve had teams of people in the past, even separate from [CPI efforts], load vans and work in neighborhoods cutting and bringing in debris, as well as giving out food and water supplies to those in affected neighborhoods. We have amazing employees.”

Wylie Fox, managing partner at Sonitrol Security Services Inc., Charlotte, N.C., said security companies must prepare for the worst in these types of events. “We have to be ready 24/7/365, so we have to ensure our employees have a clear and safe path to come to work and that we have a safe environment here for them in case of an extended stay,” he said.

Fox added that the importance of communication during a weather or other emergency event is just as important to have with the employees as with the customers, ensuring employees are available to work and able to come in. In the event of a weather-related emergency, if an employee cannot get into the central station safely, Sonitrol Security Services Inc. will send technicians in trucks to pick up operators and bring them to the station if possible, Fox said.

The next big thing that security companies have to be prepared for, according to Fox, is the influx of signals and service calls, and the possibility that first responders will not be available. “Anybody in our business in this [hurricane’s] path, is going to get a vast number of signals and we have to prepare and manage all those — power loss, telecom failure, temperature controls, and, of course, alarm signals. With something like this, we have to keep an eye out for resource limitations for first responders. One of the hardest things is telling customers that police are extremely delayed or are not capable of responding in an area.”

Fox said that in the event that police can’t get to a location, the company gives the customers measures locally they can take, such as activating a siren. “It’s a daunting situation, but we’ve got to prepare our operators to have good communication with the customer when a situation like that occurs,” he said. “It’s important to remind our operators that this is a stressful environment and a stressful time for everyone.”

And even when the hurricane has come and gone, alarm companies are bracing themselves for the impending influx of service calls that will happen in the days and weeks after the event. “Inevitably, service calls will go deep into next week. We have 24-hour on call service that is a part of our customers’ monitoring,” Debonzo said. Sonitrol Security Systems of the Triangle is preparing to maximize its employee base by shifting installation techs over to service as needed to keep up with calls.

Electric Guard Dog, Columbia, S.C. is also bracing itself for an influx of service calls in the coming days and weeks after the hurricane passes. “We have an emergency response mode that we operate in during hurricane season,” said Michael Dorrington, vice president of sales and marketing at Electric Guard Dog. According to Dorrington, the company has two people on staff that are in charge of watching the storm’s progression and communicating with everyone. In the event that the company’s offices close, Dorrington said that preparations are in place for staff to provide 24-hour support remotely.

“It’s a huge benefit to prepare for these types of events upfront,” Dorrington said. He added that Electric Guard Dog is moving technicians into areas where they will be needed, including moving technicians from other areas of the country up to the Carolinas and other affected areas in an effort to help keep up with service calls and customer service. The company, which has been through two recent Hurricanes, Harvey and Irma, had 100 percent of its customers requiring service after those events back up within 24 hours. “It’s second nature to us,” Dorrington said. “We are here to share that peace of mind with our customers.”