How will the Texas Legislature address school shootings? Likely not … 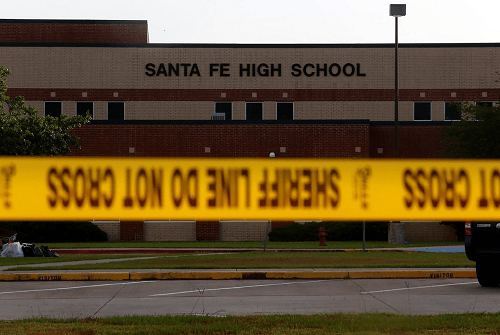 Following a deadly shooting at Santa Fe High School in May that left 10 dead and 13 others wounded, Gov. Greg Abbott released a 43-page school safety plan outlining suggestions for bills the Legislature could pass this session to reduce the threat of gun violence in Texas schools.

The suggestions ranged from beefing up existing mental health screening programs to encouraging voluntary use of gun locks at home. Other proposals, like adopting a so-called “red flag” law — which would allow courts to order the seizure or surrender of guns from people who are deemed an imminent threat by a judge — have received immediate pushback. Lt. Gov. Dan Patrick has suggested such a measure would be dead on arrival in the Senate.

Lawmakers returned to Austin this month for the first time since the Santa Fe shooting, and they have repeatedly assured their constituents that school safety — along with reforming property tax collection, school finance and combating human trafficking — will take center stage during the legislative session.

State leaders seem inclined to spend significant money on their proposals. Abbott’s plan outlined $70 million to help pay for some of his recommendations, and on Monday the Texas House released budget documents that include $109 million for school safety initiatives, including $54 million specifically for public schools. More than half of that money would come out of the Economic Stabilization Fund, the state savings account that’s projected to reach a record high balance of $15 billion.

The Senate’s supplemental budget would spend $100 million for school safety.

Here are three things to watch in the school safety debate during the session:

Abbott favors changing one of two programs that allow Texas school districts to arm their staffs. The marshal program, signed into law in 2013, allows school boards to authorize employees to carry a handgun on campus if they’re certified and trained by the Texas Commission on Law Enforcement. The governor has proposed changes to the program, including reducing the required 80 training hours — which he called “onerous” — and eliminating a requirement that teachers keep their firearms under lock and key.

Craig Bessent, one of Texas’ first school marshals and the assistant superintendent of Wylie ISD, said he’s also working with lawmakers on a bill that would allow school districts to have more marshals — currently they can only designate one for every 400 students.

Texas currently doesn’t help districts with the costs associated with training and arming marshals — experts say the cost ranges between $900 to $1,200 per marshal.

But at least for now, it seems like lawmakers are only eyeing small ways to help districts and school marshals offset some of the program’s costs.

“[Marshals] shouldn’t be expected to pay for a license that’s beneficial to the public,” said state Sen. Charles Perry, R-Lubbock, who filed a measure that would waive the $40 fee for marshals renewing their handgun licenses. “If we’re serious about the program and school security, the state ought to help with those costs, and this is one small piece of the puzzle.”

Bessent said his district has been able to afford to train its marshals, but he’s in favor of the state helping with those costs.

“There’s many school districts not as fortunate as ours,” he said. “We have budgeted funding for [the marshal program] and it’d be nice to offset that cost. But there are smaller districts and it’s tougher for them. They’re just trying to buy school buses.”

To be sure, not everyone in the Capitol is on board with expanding the marshal program. Many Democrats and some gun control advocates have already vowed to push back on bills that would increase the number of guns in schools.

“Guns in schools do not make schools safer. Our main focus is making sure the gun never gets inside the school in the first place,” said Ed Scruggs, the vice chair of Texas Gun Sense. The marshal program, he added, “just makes a firearm more accessible.”

“All of this would be a holistic approach to combating this crisis,” she said. “We’re hoping these bills will give students in crisis the resources they need so they can get help.”

Abbott, meanwhile, has touted a mental health program utilized by Texas Tech University Health Sciences Center (TTUHSC) as a potential statewide model. The Lubbock-based program, developed in 2013, helps identify middle and high school students who have been “disruptive in class, have high rates of truancy and … who may have mental health issues,” according to Billy Philips, the executive vice president and director for rural and community health at TTUHSC.

Once those kids have been identified, and their parents consent, they’re screened by a team composed of a certified clinician, their teachers and others. If warranted, they also meet with a board-certified psychiatrist. The program, nicknamed TWITR, which stands for the Telemedicine Wellness, Intervention, Triage, and Referral Project, connects at-risk kids with board certified child and adolescent psychiatrists through a combination of video conferencing and clinic visits, Philips said.

Abbott has asked the Legislature to identify $20 million to begin expanding the program. He’s also pushing lawmakers to increase the number of mental health initiatives in schools — such as hiring more behavior counselors and implementing trauma and grief programs for Texas students.

But some advocates have concerns with the program. Tiffany Williams with the Coalition of Texans with Disabilities said she feared students with disabilities could be disproportionately targeted and said her group was pushing for at least one person involved on each TWITR threat assessment team to be educated on “mental health and disability issues.”

“We don’t want [those students] unfairly perceived as threats,” she said, “when they might have an unidentified disability or already be identified as having a disability.”

Lt. Gov. Dan Patrick has arguably been the loudest voice for “hardening” Texas schools. And his proposals have since gained the support of lawmakers of all political stripes.

In July, he promised to donate up to 10 metal detectors to Santa Fe Independent School District and said the Senate this session would create a matching fund to help put metal detectors in other Texas schools and reimburse districts that have already installed them.

The House and Senate budget proposals also include money to “harden” schools.

Other proposals likely to come before lawmakers this session would reduce the number of entrances and exits in schools so teachers and administration better monitor who’s coming in, and increase the number of security cameras districts are required to have.

On Monday, Thierry filed a measure in the House that would require school districts and open-enrollment charter schools to put metal detectors or screening wands in each campus.

While not explicitly outlined in her bill, Thierry tweeted that funding for the measure could come from “the extra $9 billion mentioned in our state Comptroller’s report.”

“When I walk into the state Capitol, I have the comfort of knowing there are metal detectors and I believe our children — our most treasured asset — deserve that same protection,” Thierry said. “I can’t accept that we’re leaving our most vulnerable population helpless.”

Gun control advocates say they’re on board with bills that would “harden” public schools, but are pushing lawmakers to seriously consider other proposals — such as gun control laws, a proposal that’s essentially a non-starter at the Capitol.

“We don’t support one [hardening] idea over another, but there does need to be an investment in school safety,” Scruggs said.

Disclosure: Texas Tech University has been a financial supporter of The Texas Tribune, a nonprofit, nonpartisan news organization that is funded in part by donations from members, foundations and corporate sponsors. Financial supporters play no role in the Tribune’s journalism. Find a complete list of them here.